Itinerant, globe-trotting journalist, Andre Vltchek died this week, fittingly while still in motion, careening through an exotic city on the far side of the World. But then for Andre the World had no sides, he lived on the whole of it. 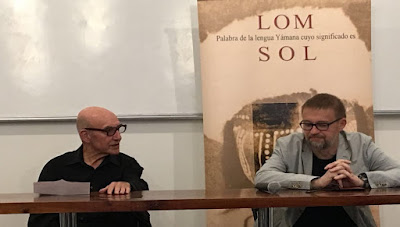 It's difficult to imagine another like him, in this time or any other. He lived and worked among the most wretched, ever faithful to the interests of those oppressed by state and corporate power. And he did this constantly, it seemed. One could never be sure where he'd be, but what was certain, he wouldn't be there for long.

I first interviewed Andre in 2008, introducing him thus:

Andre Vltchek is a freelance journalist, author, and filmmaker specializing in the Pacific region. He’s a senior fellow at the Oakland Institute, co-founder of Mainstay Press, a publishing house for progressive political fiction, and serves as editorial director for the Asiana Press Agency. Some of Andre Vltchek’s book titles include: ‘Western Terror: From Potosi to Baghdad,’ ‘Exile,’ and his latest ‘Point of No Return.’ He also produced ‘Terlena – Breaking of a Nation,’ a documentary chronicling the life and legacy of Indonesian dictator, Surharto. Indonesian dictator Suharto.

And it was to "Indonesia" we returned in our last interview in February of this year; Borneo specifically, a place as close to the heart of Andre as any on this sad planet. Typically, I caught him in Hong Kong, covering the democracy riots there, having just returned from Borneo where he was finishing work on his film chronicling the latest phase of the destruction of that island's environment and the social fabric of the local peoples; something he described as, "not only a crime against humanity, but crime against nature." He was editing in his hotel room, while recovering from a gruesome parasitic eye infection picked up in Borneo. The updated intro. then read:

Andre Vltchek is an itinerant journalist, filmmaker, philosopher, and playwright. He has covered wars and conflicts around the World, going to the places and talking to the people most directly effected by state violence. He’s been travelling to Borneo for the last few years, recording the destruction of the natural environment and civic life there. He says, the capital move to the island will, “…further erode the environment and rob millions of hectares from the island and its people.” Vltchek is also a prolific author whose latest books include: ‘China Belt and Road Initiative: Connecting Countries, Saving Millions of Lives’. ‘Revolutionary Optimism, Western Nihilism’, ‘The Great October Socialist Revolution’, ‘Fighting Against Western Imperialism’, and, with Noam Chomsky, ‘On Western Terrorism: From Hiroshima to Drone Warfare’.

Through a scratchy, transcontinental telephone connection, we discussed Indonesia’s president, Joko Widodo's idea to relocate the country’s capital, Jakarta from Java to Borneo; a disaster in the making, according to Andre, exacerbating climate changes massive deforestation had already wrought, creating dryer weather and guaranteeing Borneo continued mega-fires, now annually wiping out wildlife, while threatening air quality throughout the region.

There were never any easy conversations with Andre, but despite the profoundly depressing topics, and his physical weariness from travel and his illness, we spoke for more than an hour. His personal discomfort was not limited to the various tropical bugs and parasites taken on, but he was also afflicted with diabetes, a disease difficult to manage and treat due to the vagaries of the diet demanded by his nomadic lifestyle and scant medical resources available in some of the remote locations he reported from.We talked a few days before Christmas in 2019, again from his temporary base, at the centre of the Hong Kong uprising, (an event he reported from a distinctly different angle than Western press accounts). I said then,

"Andre’s been on the show a number of times over the years, but no matter how many times I’ve introduced him – listing his many accomplishments as a writer of plays, poetry, novels, documentary film scripts, or his many, many articles on the conditions for the poorest of the poor – I never feel I’ve credited enough this remarkable and intrepid witness to the state of the World and his times."

I still feel I failed to make full measure of the man, but then he presented at once such a massive and ethereal profile; and never stood still for long.Condolences to his wife and family, and most profoundly to all of us who have no other like him to bear witness to our fragmented and fractious World.