It is a miracle—even if not as great as the natural one it describes—that a song so simple, so welcoming, so resolute, so reassuring, so optimistic as Woody Guthrie’s “Roll on, Columbia” is not dragged down by the ironies that eddy around it. 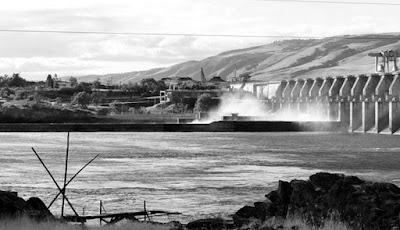 The song springs from a clever musical pun. Guthrie re-used the music of Lead Belly’s “Goodnight, Irene” to deliver the message that the Columbia River’s “power is turning the darkness to dawn.” Human advance could now hold back the night—whether good or bad.

Guthrie had left New York City with his family in 1940 for Los Angeles, and then made his way up the coast to Portland. Alan Lomax, a folklore archivist at the Library of Congress had recommended Guthrie—both were Communist fellow travelers—to contribute to a documentary on the Columbia River dams planned by the Film Division of the Bonneville Power Administration. Guthrie was to write songs, perform them on screen, and even narrate.

While on the payroll of the Department of the Interior, Guthrie toured stretches of the region and the river, still untamed aside from the massive dams of Bonneville and Grand Coulee on which construction was nearing completion. In the space of a month Guthrie wrote twenty-six songs, recording many them as the Columbia River Collection.

But the documentary’s producers became worried about giving a man with suspect political affiliations a central role. The project was anyway shelved after America joined World War II in late 1941, and when the movie finally came out in 1949 as The Columbia: America’s Greatest Power Stream, parts of only three of Guthrie’s songs were to be heard across the twenty-one-minute running time.

The subversive potential of Guthrie’s lyrics remains mostly submerged, the songs intermittently floating to the surface as fragments of heroic populism and homespun wisdom, as in the chorus of “Roll, Columbia, “Roll—a different song, than “Roll On, Columbia” (the force of Guthrie’s originality comes not in musical forms, harmonies and melodies; poetic invention and delivery give this music its power):

Uncle Sam took the challenge in the year of ’33
For the farmers and the workers and for all humanity
Now river, you can ramble where the sun sets in the sea
But while you’re rambling, river, you can do some work for me

Aside from the truncated appearances of Guthrie’s voice and guitar, the uninterrupted sonic flow of the movie comes from the symphonic score of William Lava, a handy Hollywood composer who did the music for everything from a Zorro picture in the 1930s to Road Runner cartoons and Twilight Zone episodes in the 60s. Rather than Guthrie’s folksy wisdom extolling the virtues of hydroelectric power and its democratizing potential, the authoritative voice-over was read by Phil Irwin, who would later co-host the Voice of America morning show.

Far more famous than the film, “Roll On, Columbia” did not make the final cut.

At its core a patriotic song, the lyric doesn’t conceal its intrinsic violence, instead hymning the soldiers of Manifest Destiny who make war on the first nations:

Tom Jefferson’s vision would not let him rest
An empire he saw in the Pacific Northwest
Sent Lewis and Clark and they did the rest
So roll on, Columbia, roll on

It’s there on your banks that we fought many a fight
Sheridan’s boys in the blockhouse that night
They saw us in death but never in flight
So roll on, Columbia, roll on.

The next three verses, which Guthrie sings on The Columbia River Collection, were clinically excised from the version enshrined as the official folk song of the State of Washington in 1987. These lyrics continue with episodes from the war of conquest, and at last mention the vanquished directly:

Remember the trial when the battle was won,
The wild Indian warriors to the tall timber run,
We hung every Indian with smoke in his gun;
Roll on, Columbia, Roll on!

Only the European conquerors are given the right to die heroically. The matter is put to rest along with fallen natives in the next verse—“The Injuns rest peaceful on Memaloose Isle”—before the song concludes with the triumphant quelling of the river. Yet another irony is that most of these burial islands were themselves buried by the reservoir of the Bonneville Dam. The native remains were removed to the mainland. The dead were not allowed to rest peacefully.

Guthrie’s was a voice of the displaced and dispossessed, yet this down-to-earth propaganda music helped to dispossess and displace people that had for millennia lived on and from the river he sang about. Perhaps the broadest irony is that Guthrie’s bardic gift—flowing if not with the power of the Columbia, then at least with unsurpassed fluency—yields “natural” music that praises the destruction of nature.

While Guthrie brandishes the sword of empire in “Roll On, Columbia,” the film gives far more maneuvering room to the European symphonic arsenal and its massed orchestral forces of triumphal brass, striving strings, martial cymbal crashes, and fateful harmonies overcome.

Supported by the covering fire of Lava’s score, the documentary script, written by Stephen Kahn who later made his money in the timber business, also picks up the banner of empire:

“Men have followed the great river of the West down to the Pacific, to sow their crops and cut the timber to build a colonial empire sending out its boundless resources to the far corners of the earth.”

Where before there had been rapids and leaping fish, a freighter filled with regional resources steams through the now-navigable waters.

We are encouraged to marvel at the trunks of mighty evergreens as “old as Magna Carta” now ready at least for summary felling. Later we hear of the utopian vision “to build an industrial empire from the wasted power of the Columbia”—its “thirty million wild horses” to be tamed, broken.

The river is itself an empire that must be conquered: “Upstream and in the mountain tributaries the Columbia has been an uncontrolled giant, boiling over rapids and cataracts thirty million horses plunged relentlessly to the sea. From the beginning of time this power roared unharnessed to the Pacific. Only the returning salmon instinctively fighting their way upward to spawn could defy the crashing falls and cascades.” Tremolo strings, heroic brass strains, cymbal bursts, capture the drama of the leaping salmon, sliding back down slippery rocks, yet miraculously ascending giant steps against the raging waters. This makes for one of the longest scenes in the movie—and one of the saddest. They are gone, the rapids and the fish.

We see native fishermen on their wooden platforms: a bit of “pre-civilized” flavor, the skilled poling of their nets a kind of “primitive” ballet that can never meet the demands of industrial production and the greater use for which the river is destined. These people were promised recompense with the rise of the dams and the inundation of their fishing grounds, rights guaranteed by treaty. They were given little to none of it. And what could replace what was lost?

These images of the “untamed” river and its people recede as we turn to the dynamiting of gorge walls and the pouring of millions of tons of concrete. Power lines stretch from the dam out into the desert. Towns spring up to house the armies of workers, many from Guthrie’s Oklahoma. Grand Coulee Dam rises, bigger than the pyramids, and Guthrie sings again for a few short film minutes:

I clumb the rocky canyon where the Columbia River rolls,
Seen the salmon leaping the rapids and the falls
The big Grand Coulee Dam in the state of Washington
Is just about the biggest thing that man has ever done.

We even face the end of time. Lava’s music becomes devout as Irwin intones: “In the barren hills below Ground Coulee the waters grew warmer, and almost magically, the atomic bomb was born …”

Swept away by the dams and by the documentary is native history, even if we are allowed those few shots of native fishermen working their nets from wooden platform jutting into the still-raging river:

“And so for 100 years, the river of the West was untamed, the same swirling fury which Indians have swept for salmon since the days of Captain Meriwether Lewis”— as if this life-sustaining practice and the peoples it nourished only came into existence when discovered by European “explorers.”

Past the midday point of the film, just after the prayer of thanks to the atom bomb, Woody’s voice raises a plaint above a restive, relentlessly unchanging minor chord in “Pastures of Plenty.” The title partakes of another kind of irony: the plenty has been for the few, not for the many. We’ve heard excerpted stanzas from this same song at two other moments in the film, last time accompanying scenes of refugees fleeing the Dust Bowl in overladen trucks. The Exodus is now answered by another biblical scene: tremendous flocks of sheep fill the causeway atop the Bonneville Dam as they are driven into the Promised Land that will soon bloom from the vast irrigation projects drawn from the Columbia’s Holy Waters:

Look down in the canyon and there you will see
The Grand Coulee showers her blessings on me.

At the end of the film the vast network of dams is prophesied on the Columbia and its tributaries: damnation; dam nation.

We were made to watch The Columbia documentary in grade school back in the 1970s. I remember it is as inspiring, not least for the way Woody’s voice lent the images and story the necessary common-man authenticity.

I’ve returned to the movie this week when I was reminded that June 10th marks the centennial of the passage of the Federal Water Power Act, often held to be an important accomplishment of Woodrow Wilson’s progressive agenda. With this victory in the battle against monopolies and trusts, we are often told, hydro-electric developments would be pursued in the name of the people (though not those first peoples of the Columbia Basin). In the Great Depression, the New Deal then took up the cause: Roosevelt gave his name to the reservoir made by Grand Coulee dam. Oh, for the days when the federal government was a force for good!

Only 50 of Columbia’s 1,000 miles flow freely now—at the Hanford Reach, whose warming waters birthed the atomic bomb. Columbia no longer rolls on, but loiters and warms, then foams in manic free-fall over its many dams before trudging on to its next holding tank.

Next Time: Woody, Dad, and the Dams.

DAVID YEARSLEY is a long-time contributor to CounterPunch and the Anderson Valley Advertiser. His latest book is Sex, Death, and Minuets: Anna Magdalena Bach and Her Musical Notebooks. He can be reached at This email address is being protected from spambots. You need JavaScript enabled to view it.