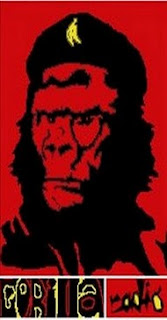 Welcome to Gorilla Radio's post-Covid-19 outbreak broadcast; not LIVE from the basement of the Student Union Building at the University of Victoria, but taped live-to-Skype in my home (ahem) studio. BUT, and it IS an enormous but, we're still heard at 101.9FM in Victoria, and at CFUV.ca everywhere else.

If you haven't heard Vladimir Putin invented Covid-19 yet you likely will soon, if you follow the Western corporate press.

I'm being only slightly facetious; in the, mainly American, press Russia, (reduced now to a mere Putin pseudonym) is in turn responsible for: The outcomes in French and Italian elections, Brexit, the Ukraine civil war and Crimea's secession, assassinating still-living journalists, and attempting to murder a former KGB double-agent, once released from Russia jail and now held incommunicado by Britain, dividing the United States along racial lines, and of course crowning Donald Trump Idiot King of America.

These among other things; just one of which, currently being heard in a Dutch court, is complicity in the downing of Malaysian Airlines flight MH17 in 2014.

The only problem there it seems, is the same problem seen with these other allegations against "Putin's" Russia: lots of media smoke with little evidentiary fire.

John Helmer’s a journalist, author, broadcaster, former political advisor to governments, and principal behind the news website, Dances with Bears. He’s also one of the most widely read Russia specialists in the business world for his news-breaking stories on Russian base and precious metals, diamonds, mining, shipping, insurance, food trade, and business policy.

Helmer’s book titles include: ‘The Deadly Simple Mechanics of Society’, ‘The Jackal’s Wedding – American Power, Arab Revolt’, (co-authored with Claudia Wright) the political memoir, ‘The Man Who Knows Too Much About Russia’, and his latest, ‘Skripal in Prison’.

And; while the global pandemic has made the World standstill, its done little to slowdown America's belligerence towards its perceived enemies in Iran, Iraq, Syria, Russia, China, or Venezuela, where the latest excuse offered for regime change there is Covid-19 related drugs smuggling employed by Nicolás Maduro to undermine the United States. You couldn't dream this stuff up; except when you could.

Kay Gimbel is a retired seaman, union executive and human rights activist. He's spent years observing the effects of Canadian mining operators on the lives and lands of the people of Central America. From his first human rights delegation with Rights Action to Guatemala, through Honduras, to take testimony from the family and compadres of murdered activist, Berta Caceres, to his latest sojourn with The Asociation de Trabajadores del Campo to witness Nicaragua's resistance to El Norte's pernicious efforts to undermine its socialist evolution, Kay is all too familiar with the dark forces threatening peasant and indigenous communities in the countries of our southern neighbours.

Kay Gimbel and keeping vigilant on issues other than corona in the second half.

And; long-time Gorilla Radio contributor, Janine Bandcroft will be here at the bottom of the hour with the Left Coast Bulletin of some of the good things still left to be gotten up to in and around our town in the coming week. But first, John Helmer and the West's trouble with Russia.