Trump thinks he has Putin’s capitulation.

On paper he has already. On the battlefield he hasn’t, yet. If Putin concedes next Tuesday, then it is clear this is exactly what Putin meant when he told an Arabic-language media interview last Monday,


“we – Turkey, Iran, and Russia – work hard, shoulder to shoulder, to achieve positive results. However, it would have been impossible without support from Saudi Arabia, and we all understand that.”

In point of fact, no one in the Arab world, nor in the Russian Foreign Ministry and General Staff, understands that at all.

The Putin interview was not conducted with the genuine Arab media. It was created with the Arabic language branch of the Russian state broadcaster RT, together with Al Arabiya, a Saudi state media organ; and Sky News Arabia, a joint venture owned by the ruling family of Abu Dhabi and the US corporation Comcast. The video record can be watched here; the Kremlin transcript of the interview can be followed here.

Several of Putin’s statements have never been uttered by a Russian (or Soviet) leader before. In addition to claiming that Russia is working “shoulder to shoulder” with Turkey in Syria, Putin also claimed:

“I would like to emphasise the positive role Saudi Arabia has played in resolving the Syrian crisis… without Saudi Arabia’s contribution towards a Syrian settlement, it would have been impossible to achieve a positive trend. Therefore, I would like to express our gratitude to both the King and the Crown Prince for this constructive approach.” Asked to weigh Russia’s relations between Iran and the Saudis, Putin claimed: “Russia has cordial relations with Iran and is on very good terms with our Arab friends.”

A dozen Moscow-based Russian experts on the Middle East have been asked to say if there is any truth or Russian precedent for Putin’s claim that Saudi and Turkish involvement in overthrowing the government in Damascus has been “shoulder to shoulder” with the Kremlin. They were also asked to comment on the priority Putin appeared to place on his “Arab friends” over Iran. No Russian expert dares to answer.

Instead, the Russian Foreign Ministry issued two carefully constructed ambiguities. Asked by a reporter if the outcome of Putin’s visit to Saudi Arabia qualified as “historic”, as it was described in advance, Foreign Minister Sergei Lavrov replied:

“The visit is historic in the sense that it is taking place for the first time during President Putin’s second term and reflects a qualitatively new level of our relations compared with his visit in 2007 and even compared with last year’s visit to the Russian Federation by His Majesty King Salman bin Abdulaziz Al Saud of Saudi Arabia.

“During today’s talks with the King and the Crown Prince, we stated that our relations were developing progressively in all areas… President Vladimir Putin gave an extensive interview before his visit to Saudi Arabia and the UAE, in which he indicated how important it was for us to cooperate with these leading Gulf states and the Middle East in general. The visit fully justified what the President had said in that interview.”

The next day, Alexander Lavrentiev (right), the Foreign Ministry’s special representative for Sy

“We didn’t agree with the Turks any questions about their presence in Syria and we don’t approve of their actions.”

Lavrentiev noted that the Adana agreement of 1998 between Damascus and Ankara allowed a “hot pursuit” by Turkish forces of up to 10 kilometres across the Syrian border for anti-terrorism operations. But he explicitly rejected both the 30-km deep, 450-km wide zone targeted by the Turks, and permanency of Turkish occupation to follow.

“[The 1998 agreement] doesn’t give them [Turkish troops] the right to remain on Syrian territory permanently and we are opposed to Turkish troops staying on Syrian territory permanently… The security of the Turkish-Syrian border must be ensured by the deployment of Syrian government troops along its entire length,” said Lavrentiev. “That’s why we never spoke in favour or supported the idea of Turkish units (being deployed there) let alone the armed Syrian opposition.” 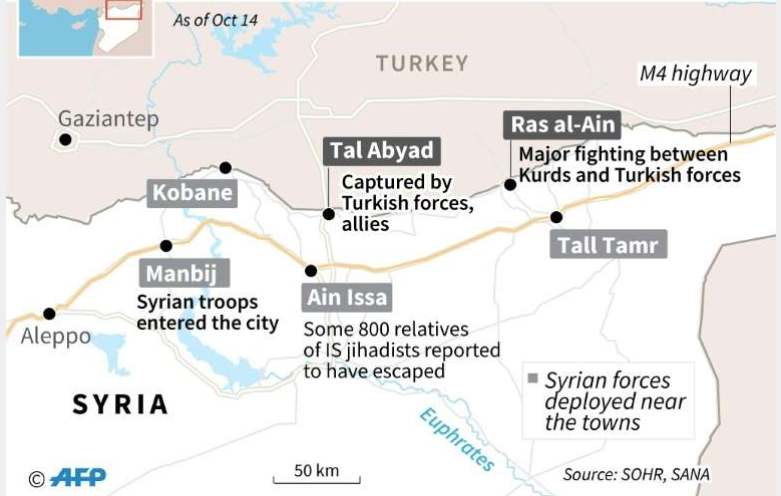 The best operational maps available for studying in almost real time Russian-supported Syrian and Kurdish resistance to the Turks’ southward and eastward push can be followed here.

For the time being, though, little detail has been published of the Russian diplomatic and military efforts undertaken to date. Lavrentiev’s role is also unknown in the negotiations between Syrian Army commanders and Kurdish leaders, held last week at the Russian Hmeimim airbase; and then yesterday, in talks with Erdogan’s officials just before the arrival of Vice President Mike Pence and Secretary of State Mike Pompeo.

The outcome of the first negotiations has been the rapid deployment of Syrian and Russian military units to block and deter the Turkish advance on the major towns between the M4 Highway and the northern border. Field reporting suggests the depth of the Turkish penetration has been halted to less than 10 kms. No Russian air support for the Syrian Army’s advance has been reported so far.

The terms of the Pence-Pompeo paper, called the “Joint Turkish-US Statement on Northeast Syria”, reveal an abrupt reversal of Erdogan’s recent Russian line, and frustration of the restraint Russian negotiators urged on Erdogan and his men before their American meetings.

In Ankara on Thursday, Vice President Pence, President Erdogan,
and between them, Kemal Ataturk.

The Thursday paper is an agreement by the US for the Turks to occupy the entire zone of northern Syria from Manbij in the west to the Iraqi border in the east. This is portrayed in the Statement as an operation that is part of the two states’ membership of the NATO alliance, with “closer coordination” of the Turkish operation “necessitated” for “protecting NATO territories and NATO populations against all threats with the solid understanding of ‘one for all and all for one’.”

That last phrase is an intentional echo of NATO’s Article 5. First signed in 1949, this provides that,

“an armed attack against one or more of them in Europe or North America shall be considered an attack against them all and consequently they agree that, if such an armed attack occurs, each of them, in exercise of the right of individual or collective self-defence recognised by Article 51 of the Charter of the United Nations, will assist the Party or Parties so attacked by taking forthwith, individually and in concert with the other Parties.”

The original geography has now been modified to stretch over the Syrian border on to Ottoman territory.

Thursday’s Pence-Pompeo paper commits the US, and NATO as well, to collective defence of the Turkish “safe zone” in Syria without delimitation of its geographical area and without restriction of time. Instead, for the 5-day period of the agreement, the Turks and Americans have agreed to pursue an ultimatum,

“in order to address the national security concerns of Turkey to include the re-collection of YPG [Kurdish People’s Protection Units] heavy weapons and the disablement of their fortifications and all other fighting positions.”

For “re-collection”, read military capitulation and surrender of all territory sought by the Turks. The ultimatum also specifies Turkish targets in the “safe zone” as “hideouts, shelters, emplacements, weapons, vehicles and equipment.”

The Russian General Staff assessment has long warned Putin against making territorial concessions to Erdogan inside Syria, and of allowing temporary ceasefires and lines of force deployment to become permanent.

For that assessment of the Putin-Erdogan Idlib agreement, read this.

Russian Defence and Foreign Ministry distrust of Erdogan’s intentions has been explained as Ottoman Empire revivalism by analysts close to the General Staff.

“The territory which the Turkish army entered [this month] was formerly part of the Ottoman Empire. There are a number of signs that Ankara cherishes dreams of recreating it. This is possible by armed means. In addition to the United States with its Messianism and belief in its own omnipotence, there are very few countries which indulge in imperial thinking. Turkey is almost the only one to embody these ideas in practice.”

More direct criticism than this of pro-Turkish officials in the Kremlin, such as Dmitry Peskov, is impossible for these Russians or their allies in the Moscow press.

Reporting on the situation assessment 24 hours before yesterday’s US-Turkish meeting, a Moscow reporter close to the General Staff claimed that,

“the Turks initially set themselves the task of occupying to a depth of 30 kilometres, and then cleaning up this territory. Apparently, they were going to drive the Kurds out of the thirty-kilometre zone indefinitely, but now it is clear that much has gone wrong. The political objective of the operation — the creation of a sanitary zone along the Turkish-Syrian border — is already unattainable.”

No Russian source is expressing this much confidence today.