The aquifer supports approximately 130 wells and so any loss in recharge could cause the aquifer to be overdrawn and precipitate the collapse of the freshwater lens under the island, allowing for salt water intrusion and the death of the aquifer.

At the heart of the issue are questions revolving around how the Province could have forcefully assigned water licenses to four senior citizen couples, two years after buying their land adjacent to the lake (though prohibiting them from actually using any of the water), without properly informing them of potential future liabilities associated with the benefit-less licences. When the dam was declared high-consequence 5 years later, the water licensees were abruptly informed that they would have to foot the bill for either reinforcement or decommissioning of the dam after having been given assurances to the contrary.

The CRD eventually engineered a scenario in which they offered Federal Disaster Mitigation Fund monies to cover decommissioning the dam but not for reinforcement so the licensees after years of struggling to find a way to save the precious lake, reluctantly agreed to draining. 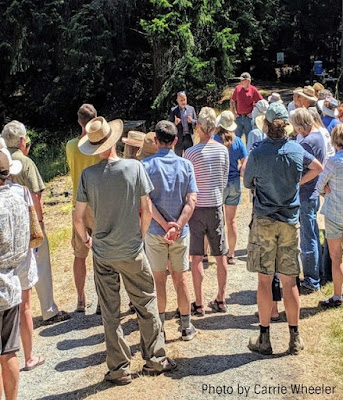 After this matter was brought out into the public light by some local activist/concerned residents, the residents of Pender Island have vigorously and publicly declared their disbelief over the proposed loss of this invaluable public freshwater asset and are dismayed that there was NO PUBLIC CONSULTATION before project commencement, though promised by the CRD in the draining agreement with water licensees.

A well attended lunch hour protest at the dam site was held last Thursday, and had a surprise appearance by MLA Adam Olsen. The protest then turned into an impromptu townhall meeting with attendees vigorously rebutting fallacies in the CRD's common public justifications for this project to Adam Olsen for over an hour.

Meanwhile, the residents have discovered that the federal Disaster Mitigation Fund monies could be potentially be applied to dam reinforcement, not just decommissioning as they were lead to believe by the CRD. The Save Razor Point's Water action group, working closely with North Pender Island Trustees Ben McConchie and Deb Morrison have been in conversation with MP Elizabeth May to have the criteria for the Federal funds critically examined to determine whether the manner in which this project is being conducted, especially with regards to the lack of a ground water impact study, aligns with the Disaster Mitigation Fund's mandate.

The group argues that in this era of unprecedented drought and global climate change crisis, true disaster mitigation would be to reinforce the dam and save the lake, preserving the aquifer recharge, maintaining it as a valuable fire-fighting reservoir in this wild-fire prone area of the island (south facing hot slopes with only one route of egress) and protecting the ecology in the lake which includes two blue-listed protected species.

The CRD has maintained that reinforcing the dam would cost $1.5 million and that funding is not available for that. However the local action group obtained a dam reinforcement estimate from a Duncan company for just under $280,000. This casts further suspicions on the reasons for the seeming bias on the part of the Province and CRD towards draining the water rather than reinforcement of the dam and preservation of the water and its myriad benefits.

Local Island Trust Trustees Ben McConchie and Deb Morrison are frustrated over their inability to get the project halted until ground water impact studies can be completed, due to an exemption in local bylaws which makes the CRD immune to the jurisdiction of the Trust in these areas that statutorily should be managed under the Trust's "Preserver and Protect" mandate. In spite of protest from the Island's Trust, the CRD continues to recklessly force the project forward.

This is a battle of high urgency as the construction crew on site at the dam has already started to drain valuable fresh water from the lake, ahead of their predicted schedule, in preparation for decommissioning the dam. This flagrant dumping of freshwater has further infuriated residents of the island as many of them refrain from flushing toilets and even keep dish water and tooth-brushing water for use in their gardens in order to save water.

The action group is asking that the dam not be fully decommissioned, making reinforcement options more difficult, until public consultation and ground water impact risk is assessed.

The action group feels this battle is important beyond the scale of protecting the local aquifer, fire protection and ecology, as it sets a precedent for how the disconnect between Provincial and CRD Global Climate Change Crisis declaration and local policies, will be handled as we moved forward in this new era of climate change and unprecedented drought.