There seems little doubt that Hunt is playing the “hard military man” card in his grubby contest with Boris Johnson to become the next prime minister. Conservative Party members are due to vote later this month on who is to replace the hapless Theresa May.

Bumbling Boris is the favourite to win the party race. But Hunt is making a last-gasp bid to rally the rank-and-file with seeming credentials of being a “tough leader”.

This week he wrote in a newspaper oped:

“As the son of a naval officer, I know a little of the sacrifices of these individuals and of their families back home.”

He then promised that, if elected prime minister, he would ramp up military spending by 25 per cent, or by £15 billion, over the next five years. He claimed the tensions in the Gulf with Iran are “proof” that Britain needs to overhaul its maritime forces.

That exorbitant indulgence of military spending will likely wreak havoc on public services and prolong years of economic austerity on ordinary Britons. But such is the ambition of Hunt to get into 10 Downing Street, it’s a devastating price he seems willing to make British citizens pay.

However, more damning is Hunt’s reckless gamble from inflaming tensions with Iran. Sending more naval forces to the Gulf at a time of knife-edge fears about a war breaking out is ludicrous, if not criminally irresponsible. Over the past two months, there have already been numerous incidents of alleged sabotage on shipping in the strategically important Gulf which the US has blamed on Iran. An American spy drone was shot down on June 20 by the Iranians after it allegedly violated Iran’s airspace. That incident nearly resulted in, reportedly, Trump ordering airstrikes.

The seizure last week by British commandos of an Iranian oil tanker off Gibraltar has added to fraught nerves in the region. More so because Tehran contends that seizure to be an illegal “act of piracy” orchestrated by Washington and London. The refusal by Britain to release the cargo of two million barrels of oil – based on dubious claims of enforcing EU sanctions against Syria – would also seem to be a calculated insult to provoke Iran. 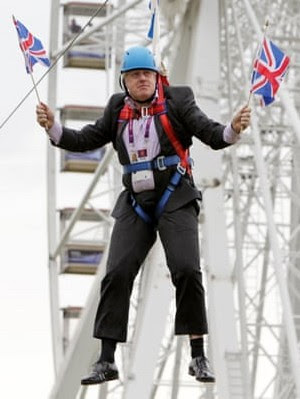 From Iran’s point of view, the British are permitted to hijack oil ships, but whenever its patrol boats even as much as approach a British tanker near its territorial waters, then London and Washington are crying “foul”. The flagrant hypocrisy is in itself another provocative goading.

Let’s be clear: the Buffoonish Boris Johnson would be equally as deplorable as the Silly Hunt. Both of them are unscrupulous sycophants to America’s President Trump and his crazed warmongering towards Iran. Russia has warned that the escalating tensions in the Gulf could spark a catastrophic war. Potentially a war in the tinderbox region could lead to World War III. Lamentably, Britain’s shambolic politics and its venal politicians are playing with fire in their pathetic plans for personal self-aggrandizement of power.

Hunt’s double-think posturing of “escalating to de-escalate” is a sure sign that this Tory toff should not be heading to Downing Street, but rather to a padded cell. Johnson could also qualify for a cell next door.

The backdrop to resolving the current madness for endangering global peace seems blindingly obvious. Washington needs to abide by the 2015 international nuclear treaty with Iran, lift the sanctions crushing the Iranian economy, and remove all warships from the Persian Gulf.

As Iranian President Hassan Rouhani said this week, there would be no need for the US or Britain to “protect shipping” in the Gulf if these two states simply respected international law and norms of diplomacy.

It is insane and gut-wrenchingly tragic that world peace is being jeopardized by idiots like Hunt, Johnson and their puppet master in Washington. The only long-term solution is for the whole rotten political class in Britain, and the US, to be thrown out by popular revolt.