Reflections on This Weird, Wild Job of Mine 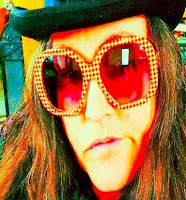 Sometimes really really famous people share my stuff and a deluge of haters rush in to admonish them for doing so because I am evil. I am still not used to either of these things.

I took a couple of days off for my wedding anniversary and during that time Susan Sarandon shared my last article, demanding to know why we’re not discussing the important fact that a document from the OPCW’s investigation contradicting the official OPCW findings on an alleged chemical attack in Douma, Syria was not shared with the public.

Just as when Roger Waters promoted me on his Twitter account, any time I checked Twitter I saw a bunch of people arguing about whether or not I’m a secret Nazi or a plagiarist or an Assad lover or a racist, all in response to the sharing of an article that questioned a narrative used to support western imperialism. It’s a weird experience.

This whole job has been weird, really, and with some days off I’ve had time to reflect on that. I’ll write a proper article shortly, but I just wanted to tap out a few thoughts on this strange journey I’ve been on while they’re still on my mind.

This whole gig has been a glorious accident. Back in 2016 I needed a job and saw an advertisement on Facebook for a self-publishing news aggregate called Inquisitr, and I figured maybe I could finally put my journalism degree to some use. Whenever I wrote hard news stories they tended to flop, but when I wrote opinion pieces about the Sanders campaign and the fraud of the DNC they shared really well. People told me I was giving a voice to things that needed saying, and I started building up an audience. After the election everyone started freaking out about “fake news” and Inquisitr asked me to move back to hard news stories, but by then I had a lot to say so I made the transition to becoming crowdfunded.

Moving from narrow discussions about presidential candidates to general commentary on world politics was like suddenly jumping into a deep ocean full of strange creatures and mystery. I could see that the system was corrupt, I had my intuition and I knew a few hard facts, but the following I was gaining quickly put me on the same turf as people who’ve been studying this stuff for many years and it was intimidating. Because I can make jokes and write prolifically about things in a fresh and interesting way, my audience grew a lot faster than that of other alternative media writers, and it made people suspicious of me.

Unlike the indie journos who I tend to get lumped in with, I didn’t spend my first years working my way up through media outlets mostly unseen under the guidance of editors and senior staff; I just got tossed into the mix and had to build my own system for navigating this strange new ocean by myself. I had to learn everything on the fly while in full visibility. The first part of my career was basically just me telling readers “Hey, that thing over there looks suspicious!” and “No, you’re not crazy, I see the corruption too” while simultaneously trying to figure out exactly what the hell’s going on here and sorting out quality sources of information from crap. I had no coach or adviser for any of this besides my husband I’d only just married, who was even more new to it all than I was.

During those early days I pissed a lot of people off, saying things you’re not supposed to say and advancing ideas you’re not supposed to advance. I mean, I still piss people off all the time today, but I feel like I would navigate that whole scene a lot more gracefully if I had it all to do over again. The nature of being new to something is to not be very graceful at it, though; if I would have let fear of my own clumsiness and inexperience stand in the way, I never would have begun this journey. So no regrets.

So my whole political commentary career has basically just been me learning about the world and sharing what I’ve learned with my readers. It started out as crude crayon drawings of what’s going on, but as my knowledge and experience has increased those drawings have been getting more and more refined. I now feel like I have a solid understanding of what’s going on in the world and why things are fucked in the way that they are fucked, and I’m always adding more tools to my toolbox for describing it.

Along the way I had to sort out a whole heap of self-esteem issues too. It’s not easy being a forty-something mum of two who hardly even had much of a social life, let alone found herself in the spotlight. Like many women my age, I have a lot of shame about my body and my looks and I certainly had no intention of ever putting either of those things out there for scrutiny, let alone scrutinized by people who are heavily invested in hating me. That part has been really scary for me in an eerily primal way.

I’ve come to realize that my sexuality and my creativity are the same thing. I need confidence in myself in order to write well. Men who hate you seem to know that; they instinctively reach for insults and threats that specifically target my sexuality. So having every horrible thing I’ve ever feared or I’ve ever secretly thought about myself be tweeted and shared and laughed at and liked is not something I’ve enjoyed. The thought “This is why women don’t do this” has come up more than once, but I keep going because yes, this is why women don’t do this but dammit if I’ll let it stop me.

I also have a secret weapon in my husband Tim who not only works with me full time but who can very quickly make me feel like the sexiest goddamn bitch that ever stalked the earth. So there’s that. I struggle to convey how important Tim is to this thing and how there is no way I could do it without him. My whole prolific output is because of the stability of our fusion. I say this because I don’t want anyone comparing themselves to me and feeling bummed out by their output. You need to know that you’re looking at two people in a very tight, stable collaboration and if you’re working alone then you shouldn’t compare your output to mine. Keep going, we need you more than ever!

So anyway, now here I am trying to shove healthy ideas into mainstream consciousness with an acute awareness that every time I get anywhere near the mainstream I get a bunch of angry people telling everyone that I’m all sorts of horrible things. And it’s weird. I see the ideas I share as valuable enough that the periodic hate brigade isn’t enough to silence me, but I can certainly understand how people are pressured by manipulators and groupthink bullies into staying invisible and making a small target of themselves.

And Sarandon actually did do a great job of staving off the war propagandists who tried to attack her for sharing my work rather than addressing the information in the article. Journalist Rania Khalek tweeted, “The usual regime change characters swarmed Sarandon for amplifying what they want buried about Syria and her responses are so good and satisfying.”

Which is good. The fact that I was able to throw an important idea over the wall of the establishment narrative managers into a wider audience without my name poisoning it is encouraging. That’s a major shift. Hopefully I’ll be able to get more and more ideas over that wall going forward.

So that’s my challenge: getting dissident ideas past the goalkeeping of the narrative managers and into the bloodstream of public consciousness. I don’t care if those ideas get there through me or if someone else picks them up and carries them over the edge themselves; the important thing is waking up the mainstream public to what’s going on in their world so that they can cast off the propaganda manipulations that have been keeping them sedated and start making society work for them instead of for a few sociopathic oligarchs.

Keeping these ideas in the fringe (while egoically pleasing to a certain subset of political dissidents who enjoy keeping their stuff marginal for the same reason a hipster enjoys boasting that they liked a band before they were popular) is not going to save the world. Keeping anti-establishment ideas on the fringe is exactly what the narrative managers want, and we mustn’t allow it to continue.

So I intend to keep plugging away at this thing, keep learning, keep coming up with new ideas and approaches, and keep writing the most sizzling hot articles I possibly can. Maybe I’ll help move the needle enough to shift public consciousness to where it needs to be, maybe I won’t, but god dammit I’ll be able to tell my kids that I tried.

Thanks for coming along for the ride.

Everyone has my //medium.com/@caityjohnstone/i-permanently-release-all-copyrights-to-all-my-writing-use-any-of-it-however-you-want-9ad929b92d42">unconditional permission to republish or use any part of this work (or anything else I’ve written) in any way they like free of charge. My work is //medium.com/@caityjohnstone/just-a-note-of-gratitude-to-readers-and-patrons-7df920b5ced">entirely reader-supported, so if you enjoyed this piece please consider sharing it around, liking me on Facebook, following my antics on Twitter, throwing some money into my hat on Patreon or Paypal, purchasing some of my sweet merchandise, buying my new book Rogue Nation: Psychonautical Adventures With Caitlin Johnstone, or my previous book Woke: A Field Guide for Utopia Preppers. The best way to get around the internet censors and make sure you see the stuff I publish is to subscribe to the mailing list for my website, which will get you an email notification for everything I publish. For more info on who I am, where I stand, and what I’m trying to do with this platform, //medium.com/@caityjohnstone/who-i-am-where-i-stand-and-what-im-trying-to-do-here-4a113e783578">click here.