If Everything John le Carré Wrote Since 1961 on British Spying Against Moscow Was True - It Was - Why Read the New le Carré Book Now? 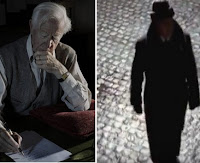 Moscow - “Always George’s problem,” John le Carré (lead image, left) has written in his latest resurrection of his best-known MI6 officer, George Smiley (right), “seeing both sides of everything. Wore him out.” “Breathtaking”, claimed an Irish novelist with no government experience, in a London newspaper review. “Gripping”, chimed a BBC journalist whose only official secret was an affair with another journalist he tried to stop other journalists reporting.

“An unexpected treat”, blurbed one of Rupert Murdoch’s newspaper employees. “A nostalgic comparison between espionage then and now”, blurbed another. The Los Angeles Times was religious about le Carré’s theme — “the toll eaxcted on the individual’s [spy] soul by serving institutions that fail to live up to their professed values will resonate as [readers] consider past and present covert actions of British and US governments.” This is a bite-back for the virulent hatred for the US and its intelligence services le Carré has written into his story, including disclosure of the MI6 document handling code, GUARD, which is so secret the British Government doesn’t mention it in its classification guidelines. It means keep secret from Americans.

David Ignatius, a career-long mouthpiece for the US services at the Washington Post, warns his readers. Le Carré “is at his worst describing characters he doesn’t like (in his recent books, many of the heavy-handed, unconvincing figures are American intelligence officers).”

Since the majority of le Carré’s readers are Americans, le Carré is asking them to pay money and wear themselves out seeing both sides of everything. Only le Carré’s intelligence officers never see the Russian side of anything. What they do see – le Carré makes the point repeatedly in A Legacy of Spies, now in its fifth printing – is the pointlessness of the intelligence they target, and the worthlessness of their methods for going about it.

Jonathan Haslam, a British historian of the Anglo-American side of Russian espionage, isn’t sure which is stupider in spy stories – the derring-do of undercover agents or “the grubby reality immortalised by the former MI5/MI6 officer David Cornwall (John le Carré).” So Haslam recommends his own published inquiries into “the back rooms where the pencil has proven infinitely mightier than the sword.” Haslam can’t spell David Cornwell’s name correctly; he also can’t spell the Russian word, dacha. These are childish mistakes; the adult ones are documented here. 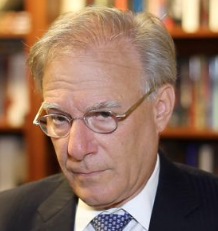 Haslam, like Ignatius (right) and the other blurb writers, doesn’t believe le Carré’s point about pointlessness and worthlessness. They see no irony in recommending the believability of their own propaganda over le Carré’s fiction. They refuse to concede what British and Russian professionals have been warning in parallel with le Carré’s MI6 stories.

“They were playing a game, and the point was to keep the game going, not to win.”

Intelligence isn’t really produced by spies, Keegan concludes after analyzing cases of intelligence in warfare from the Napoleonic Wars through the American Civil War to several battles in the wars against Germany and Japan, the Cold War with the Soviet Union, and ending with the British-Argentine war over the Falkland Islands.

“Intelligence, however good, is not necessarily the means to victory…ultimately it is force, not fraud or forethought, that counts.”

The KGB’s success in recruiting British double agents, Keegan reflected, came out of little, and ended up in next to nothing. Double agents like Kim Philby “had been seduced by the warped logic of Marxism,” in Keegan’s opinion. They caused “in retrospect damage [that] was superficial rather than substantial.”

Philby, Keegan adds, “was a classic example of a spy spying on spies, and the atmosphere of his world is perfectly caught in the novels of John le Carré, which almost exclusively concern the operations of espionage services against each other.”

Left to right: Kim Philby (in Moscow after he defected in 1963);
John Keegan; Victor Cherkashin.

Victor Cherkashin, the KGB’s most successful counter-intelligence officer and American department chief, retired in 1991; then in 2004, after some of his US spies were caught, he published his memoirs. “While the general public clamours for plots about vital issues of national security,” Cherkashin wrote, “most spying has actually made little difference.” Summing up for his side in the last years of the Cold War, Cherkashin said: “intelligence became a game of penetrating the adversary’s service. It was expensive and superfluous.”

The new le Carré tale is forced by a group of MI6 lawyers out of Peter Guillam, one of George Smiley’s old agents, summoned from retirement on his Breton farm and required to pay £50 per day out of his own pension for a London bedsit during his interrogations. There is only one joke in the story, and that’s an inside one. As he sits in a waiting-room at headquarters, Guillam says to himself: “I thumb a grimy copy of Private Eye and wonder which of us has lost our sense of humour.”

The lawyers are trying to assemble the government’s defence against a wrongful death compensation lawsuit by the surviving children of two agents. One of them, the Smiley agent Alec Leamas, had been shot by East German border guards at the Berlin Wall; the other, an East German woman code-named Tulip, was murdered by a Stasi agent inside the compound of an MI6 safe house near Salisbury (yes, it’s Skripal country where enemy assassins still roam free).

Both of them had been betrayed by one of Smiley’s British colleagues. The details were covered up, and the files removed from the MI6 archive, in order to protect the Stasi assassin. In return, he betrayed his German and Russian agents until the KGB tumbled to him, and he got his deserts.

“What follows is a truthful account , as best I am able to provide it,” Guillam and le Carré open the book, “of my role in the British deception operation, codenamed Windfall.” 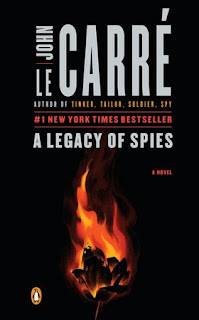 Truthfulness is Guillam’s French side; deception is British. Possibly the only leg up which the British services still think they have over their partners against their common adversary.

Le Carré condemns the idea, and he’s been doing that in the Smiley series since 1961. He gives Smiley the semi-final word.

“We were not pitiless, Peter. We were never pitiless. We had the larger pity. Arguably, it was misplaced. Certainly it was futile. We know that now. We did not know it then.”

Le Carré then lets Smiley lower the Union Jack. “Why did I do them?… was it all in the great name of capitalism? God forbid. Christendom? God forbid again…So was it all for England There was a time, of course there was. But whose England?… I’m a European, Peter. If I had a mission—if I was ever aware of one beyond our business with the enemy, it was to Europe. If I was heartless, I was heartless for Europe. If I had an unattainable ideal, it was of leading Europe out of her darkness towards a new age of reason.”

To make sure readers know that Smiley isn’t running a deception operation for Brexit (or is it Remain?), le Carré starts the book himself with an epigraph from one of the foggiest Germans of them all. “Every man is born as many men and dies as a single one – Heidegger (attrib).” By (attrib) le Carré is admitting he doesn’t know for certain. Le Carré readers appear to need the reassurance of doubt repeated over and over again.