"Never have so many Arctic indicators been brought together in a single paper." And the findings spell trouble for the entire planet." 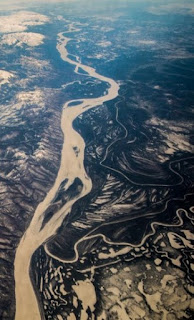 A new research paper by American and European climate scientists focused on Arctic warming published Monday reveals, the "smoking gun" when it comes to changes in the world's northern polar region is rapidly warming air temperatures that are having — and will continue to have — massive and negative impacts across the globe.

"Key Indicators of Arctic Climate Change: 1971–2017" is the work of scientists at the International Arctic Research Center at the University of Alaska Fairbanks and the Geological Survey of Denmark and Greenland in Copenhagen (GUES).

"The Arctic system is trending away from its 20th century state and into an unprecedented state, with implications not only within but beyond the Arctic." said lead author Jason Box.

"Because the Arctic atmosphere is warming faster than the rest of the world, weather patterns across Europe, North America, and Asia are becoming more persistent, leading to extreme weather conditions.

"Another example is the disruption of the ocean circulation that can further destabilize climate: for example, cooling across northwestern Europe and strengthening of storms."

John Walsh, chief scientist at AUF's research center, was the one who called arctic air temperatures the "smoking gun" discovered during the research—a finding the team did not necessarily anticipate.

"I didn't expect the tie-in with temperature to be as strong as it was," Walsh said.

"All the variables are connected with temperature. All components of the Arctic system are involved in this change."

The study, published Monday as the flagship piece in a special issue on Arctic climate change indicators published by the journal Environmental Research Letters, is the first of its kind to combine observations of physical climate indicators—such as snow cover, rainfall, and seasonal measurements of sea ice extent—with biological impacts, such as a mismatch in the timing of flowers blooming and pollinators working. According to Walsh, "Never have so many Arctic indicators been brought together in a single paper."

This three-and-a-half minute video put together by the research team,

explains its methodology and findings in detail.

Statewide temperatures averaged 27°F degrees last month, a full 4 degrees higher than the record set in 1965. Brian Brettschneider, a climatologist with the International Arctic Research Center at University of Alaska Fairbanks, told the Anchorage Daily News, "We're not just eking past records. This is obliterating records."

Also last month, as Common Dreams reported, the UN Environment Programme (ENUP) warned in a far-reaching report that winter temperatures in the Arctic are already "locked in" in such a way that significant sea level increases are now inevitable this century.

Rising temperatures, along with ocean acidification, pollution, and thawing permafrost threaten the Arctic and the more than four million people who inhabit it, including 10 percent who are Indigenous. But, as UNEP acting executive director Joyce Msuya noted at the time,

That warning was echoed by the researchers behind the new study out Monday. Their hope, they said, is that the findings about air temperatures and the delicate interconnections between the climate and other natural systems in the Artic will "provide a foundation for a more integrated understanding of the Arctic and its role in the dynamics of the Earth's biogeophysical systems."