Good Riddance to NDP MP Who Is Pro-Israel, Pro-US Empire 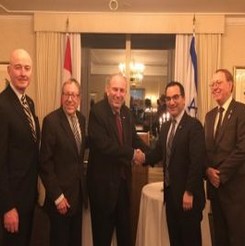 Victoria MP Murray Rankin’s recent announcement that he won’t seek re-election is a victory for NDP members who stand for Palestinian rights and oppose regime change efforts in Iran and Venezuela.
Since taking his place in Parliament seven years ago Rankin has been a leading anti-Palestinian activist in the NDP.
Israeli Ambassador Barkan with MPs Levitt, Sweet and Rankin, (far right) as well as former MP Irwin Cotler.
During Israel’s Summer 2014 destruction of Gaza, which left 2,200 Palestinians dead, he offered remarks supporting Israel (along with Prime Minister Stephen Harper) read at a Victoria Jewish Federation event to raise money for an emergency Israel Relief Fund. In 2016 Rankin went to Israel in a Centre for Israel and Jewish Affairs organized trip and was one of the MPs who blocked the “Palestine Resolution” from being discussed at the NDP convention in February. In December Rankin joined Ambassador Nimrod Barkan and other prominent anti-Palestinian politicians (Michael Levitt, David Sweet, Irwin Cotler) for an event at the Israeli Embassy.
Here is a brief summary of his blindly pro-Israel, pro-US Empire activities as MP:

Rankin’s departure weakens the anti-Palestinian, pro-imperialist camp in the NDP. It also offers an opportunity for a more internationalist minded politician to take his seat.