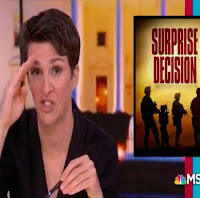 Making the social media rounds at the moment is a transcription of Rachel Maddow’s “utterly terrifying” and “deeply chilling” take on one tidbit from Trump’s surreal and probably drug-addled rambling in front of his Cabinet this week.

At one point, Trump said the Soviet Union invaded Afghanistan in order to fight Islamic terrorism.

But Maddow assures us, in great detail, that no one, anywhere — not even among Trump’s most rabid supporters, not even the bug-eyed goobers on Fox and Friends — has ever advanced the notion that the Soviet incursion had anything to do with terrorism.

In fact, the only place in the history of the world in which this notion has ever been bruited is — of course — Putin’s Kremlin, which is planning an official “reassessment” of the Afghan invasion. (Which, rest assured, is not at all like the “reassessment” being done by our stalwart Resisters today of the murderously criminal regime of George W. Bush.)

Maddow says plainly that this idea does not exist anywhere "in nature" except within the bowels of Putin’s United Russia party. (Though how Maddow herself found out about the proposed resolution when no one else in nature could have ever even heard of it outside of Putin’s party circles is not explained.)

This notion cannot be found anywhere “in American politics, in American media, in American academia, in American fantasy football chat rooms.” Not even “among weird, conservative fringe media figures that you might not know about, but the President might love.” No one has ever written, spoken or heard anything remotely like this until it was cooked up by Putin’s party hacks. And you should be absolutely, utterly, deeply terrified that Trump has somehow got hold of a mangled, drug-addled version of this idea, because he could have only gotten it from Putin’s own party members. Because, again the idea does not exist in nature anywhere else. And Maddow knows this, people, because she spent one whole day looking to find some trace of this non-existent in nature idea! And if you aren’t absolutely chilled to the bone, to the marrow, chilled all the way down to your quantum particles by this, then God help you. You must be a Kremlin dupe, like those Black Lives Matter rubes or those Dakota Pipeline saps. Or a paid Kremlin stooge.

Yet if I may paraphrase the great Ronald Reagan — whom that fightin’ progressive Nancy Pelosi favourably cited in her first speech as Speaker this week — facts are stubborn things. They exist, and persist, whether anyone notices them or not. And the fact that Afghanistan's jihadi extremists were sowing chaos with acts of violence (which in our day we call terrorism but back then were called "freedom fighting"), and that this chaos was exacerbating the turmoil in the faction-ridden Soviet-backed secular government and was a factor in the Kremlin’s tortured decision to intervene, was once considered rather standard fare back in the distant days before history was displaced by hysteria.

When the Soviets went in, their claim that the US was backing Islamic terrorists was widely dismissed as empty propaganda. But it was later confirmed, cheerfully, by the very architect of that policy, Zbigniew Brzezinski, who told Le Nouvel Observateur in 1998 that he persuaded Jimmy Carter to secretly arm and support the jihadis precisely in hopes of provoking a Soviet incursion. Here's what Brzezinski had to say:

Question: The former director of the CIA, Robert Gates, stated in his memoirs that the American intelligence services began to aid the Mujahiddin in Afghanistan six months before the Soviet intervention. Is this period, you were the national security advisor to President Carter. You therefore played a key role in this affair. Is this correct?

Brzezinski: Yes. According to the official version of history, CIA aid to the Mujahiddin began during 1980, that is to say, after the Soviet army invaded Afghanistan on December 24, 1979. But the reality, closely guarded until now, is completely otherwise: Indeed, it was July 3, 1979 that President Carter signed the first directive for secret aid to the opponents of the pro-Soviet regime in Kabul. And that very day, I wrote a note to the president in which I explained to him that in my opinion this aid was going to induce a Soviet military intervention.

Q: Despite this risk, you were an advocate of this covert action. But perhaps you yourself desired this Soviet entry into the war and looked for a way to provoke it?

B: It wasn’t quite like that. We didn’t push the Russians to intervene, but we knowingly increased the probability that they would.

Q: When the Soviets justified their intervention by asserting that they intended to fight against secret US involvement in Afghanistan, nobody believed them. However, there was an element of truth in this. You don’t regret any of this today?

B: Regret what? That secret operation was an excellent idea. It had the effect of drawing the Russians into the Afghan trap and you want me to regret it? The day that the Soviets officially crossed the border, I wrote to President Carter, essentially: “We now have the opportunity of giving to the USSR its Vietnam war." Indeed, for almost 10 years, Moscow had to carry on a war that was unsustainable for the regime, a conflict that bought about the demoralization and finally the breakup of the Soviet empire.

Q: And neither do you regret having supported Islamic fundamentalism, which has given arms and advice to future terrorists?

B: What is more important in world history? The Taliban or the collapse of the Soviet empire? Some agitated Moslems or the liberation of Central Europe and the end of the cold war?

This is not to say that the Soviets should have intervened in Afghanistan, as Trump was ignorantly asserting the other day. Indeed, the intervention was fiercely contested inside the Kremlin itself, by future leader Andropov among others, but the opponents were overruled by more hardline militarists. (The Politburo PNAC, you might say.) Nor would any knowledgeable person say that the sole reason the Soviets went in was to “fight terrorism" (which is what Putin's party is apparently getting ready to claim.) But the notion Maddow is pushing here -- that Putin’s Kremlin is the only place anyone has ever mentioned anything remotely resembling the idea that Islamic terrorism was a factor in the Soviet invasion is, to put it mildly, ignorant nonsense.

Of course, Trump is ignorant too, but I’m not concerned here with his obvious incapacities. No, what troubles me most about this episode is the increasing historical amnesia of the “Resistance,” which is reducing complex issues – with long, detailed, nuanced histories – to fearmongering simplicities. How is this going to help us move forward with any kind of informed, substantive wisdom and insight? How is this “progressive”? Why does every single evil in the world — and every single thing that’s wrong with American politics and society — have to be attributed to a conniving little mastermind cackling in the Kremlin? It’s a childish, cartoonish and dangerous way to look at the world — yet increasingly it is the only take that’s given any space in our “liberal” media.

I’ll say again what I’ve said many times: you don’t have to prove that Trump is a puppet dancing on Putin’s strings to get rid of him. Right down the street from the White House is a hotel. Trump owns the hotel and profits directly from it. Every single day of his presidency, he has been corruptly pocketing personal gains from foreign governments and companies who use his hotel. This alone is an impeachable offense. It’s cut and dried. The Democrats now in control of the House could immediately begin impeachment hearings on this basis alone -- if they wanted to.

I’m not saying Russian skullduggery should be ignored, but if even one-tenth of the media energy spent in the last two years trying to prove Trump is getting orders from Putin had been directed at exposing Trump's open, manifest, plainly impeachable corruption (the hotel is just one example), then we might have built a great public groundswell of outrage and disgust that, at the very least, would have taken us much further down the road to impeachment than we are today.

(And as a side issue: if another one-tenth of that energy had been spent building support for abolishing or reforming the Electoral College system, then we would be well on our way to avoiding yet another presidency by vicious right-wing vote-losers like George W. Bush and Trump.)

Anyway, pace Maddow, there were Islamic terrorist groups in Afghanistan (although they were called “freedom fighters” when they were later invited to Reagan’s White House.) They were engaged in wholesale violence that further destabilized an already unstable, badly governed state. The Soviets did point to this as a factor in their disastrous decision to intervene. The United States did covertly support this jihadi uprising before the Soviets moved in, and continued this support throughout the conflict (including, as the Washington Post reported, providing training manuals for terrorist tactics and even schoolbooks for children that promoted jihad against the secular infidels).

All of these facts have been discussed and debated openly and freely in the US media and academia for years. Whole books about the complexities of the Soviet invasion, including these facts, have been written by reputable academics, diplomats and historians. Perhaps Maddow spent too long doing her serious journalistic research in “American fantasy football chat rooms” to avail herself of any of this information. I learned these things from reading readily available mainstream books and articles — some of them published even before Putin was elevated to the Russian presidency by America’s favourite dipsomaniac, Boris Yeltsin. I didn’t get them from Putin party insiders or encrypted Kremlin text messages or even from Facebook memes.

Trump shows us over and over, day after day, that historical facts don’t matter anymore. You say whatever you need to say on any given day to scare and outrage people into turning their brains off. But it’s sad to see the “Resistance” adopting this same attitude and, like Trump, continually reducing the world to a frenzied, fearful cartoon, one which distracts us from the complexities of reality and carries us further away from any kind of genuine change in our woeful situation.