by Christopher Black - via Dances with Bears

“It is clear the US is pushing the battle line to our door… We can completely regard the US arrest of Meng Wanzhou as a declaration of war against China.” 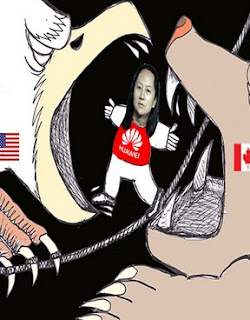 Toronto - So read an editorial in the Global Times of China on December 6, the day after Meng Wanzhou, chief financial officer of the Chinese company Huawei was taken hostage by the Canadian and American governments on December 1.

The daughter of the founder of China’s largest telecommunications company was arbitrarily arrested and detained by Canadian police in Vancouver in transit between planes on December 1 on the pretext of a US extradition request.

The arrest has shocked and angered China while in Canada the large Chinese population must wonder how safe they are.

The background to the arrest is fairly simple.

Huawei has become a global competitor in the global telephone market and their 5G phones are cutting-edge technology and so not welcomed by competing phone companies in the US, Japan, South Korea, France, and Sweden; they are so afraid of the competition that they and their governments have spread stories that the phones are loaded with spyware and are “a danger to national security.”

The company has even been threatened by the US and allied governments with criminal charges in America’s increasingly hostile economic war against China, alongside its increasing military pressure, provocations and insults. It’s one way to control the market. But now, acting as a mafia they have kidnapped, detained, and hold hostage a Chinese woman whose simple crime is going to work every day. The lack of outcry from women’s rights groups in the west is, not surprisingly, deafening.

The pretext for her arrest is that Huawei has violated US sanctions against Iran. But the “sanctions” imposed on Iran by the US recently are illegal under international law, that is under the UN Charter which stipulates that only the Security Council can impose economic sanctions on a nation.

The latest American sanctions are not approved by the Security Council. Sanctions imposed unilaterally by one nation against another are not legal and are a violation of international law.

There is, therefore, no law which Meng or Huawei is violating. There is no legal justification for her arrest by the Canadians who are detaining her without lawful justification.

Meng Wanzhou with President Vladimir Putin at a session of the VTB
Capital Investment Forum in Moscow, in 2014. Their meeting to discuss
money and investment in violation of US sanctions against Russia was a US crime.

The Canadian prime minister Justin Trudeau claims he had no hand in this arrest, yet admits he knew about it days beforehand. But he cannot claim that since the police who arrested Meng and the prosecutors handling the file are federal officials, and so the prime minister must have been involved.

John Bolton in the US, the National Security Advisor, has also admitted that he knew that this was going to happen several days in advance, so there must have been communication between the Canadian and the American authorities at a high level to set this up.

In fact, to add insult to injury, the arrest took place as President Donald Trump was sitting with President Xi Jinping, who was trying to seek an accommodation with the Americans to ease the economic war being waged against China by the US. So as Trump sat with Xi, smiling like a lizard in the sun, he knew that Meng was being arrested. Trump continued to act like the lizard he is, while Xi acted in good faith, unaware of what was happening further north in Canada.

Trudeau’s statement that this arbitrary arrest was not politically motivated and that he was not involved in giving approval for Canadian police to detain her once she landed in Vancouver is preposterous since the extradition treaty between Canada and the United States requires that the US inform the Canadian foreign ministry of its request and send the Canadian authorities the documents supporting the charge and the extradition.

Further, Article 2 of the Treaty requires that Canada can only act on such a request if, and only if, the offence alleged is also an offence under the laws of both treaty states. But the unilaterally imposed and illegal sanctions placed against Iran by the US are not punishable acts in Canada; even in the US the “sanctions” are illegal as they are in violation of the UN Charter. 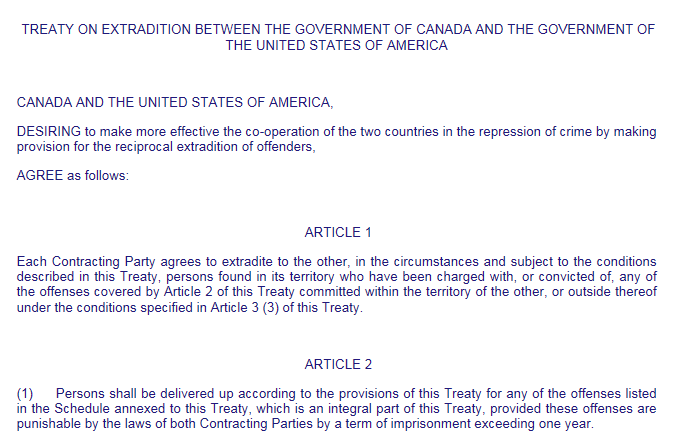 “Extradition shall not be granted in any of the following circumstances:

(iii) When the offense in respect of which extradition is requested is of a political character, or the person whose extradition is requested proves that the extradition request has been made for the purpose of trying to punish him (or her) for an offense of the above-mentioned character. If any question arises as to whether a case comes within the provisions of this subparagraph, the authorities of the Government on which the requisition is made shall decide.” 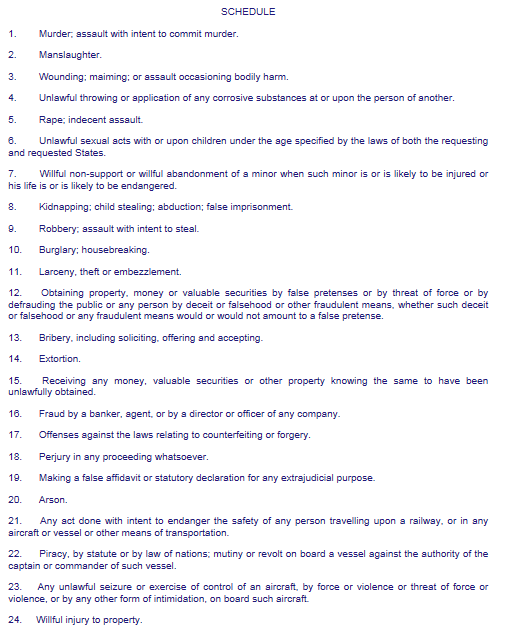 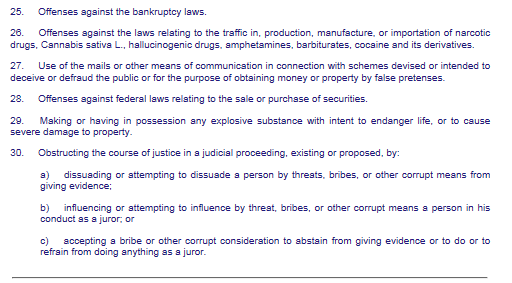 The US case against Meng Wanzhou has yet to be fully documented in a Canadian court. At a bail hearing on December 7, a Canadian prosecutor told the court Meng has been “charged with conspiracy to defraud banks.”According to the state Canadian Broadcasting Corporation (CBC),

“U.S. authorities allege [Meng] used a Huawei subsidiary [Skycom Tech Co.] to do business in Iran in violation of U.S. sanctions and lied to bankers about the corporation's ties with the subsidiary.”

Fraud is alleged because that is the only one of the 30 offences in the Schedule of the US-Canada extradition treaty – item 16 -- which comes close to the Iran sanction prosecution intended against Meng; ignoring US sanctions is not an extraditable Canadian offence listed in the Schedule. Media reporting based on espionage by US intelligence agencies indicates the bank involved was a non-US incorporated branch of HSBC.

Meng’s arrest was also carried out, according to CBC, in the international transit zone of Vancouver airport, as Meng was transferring from an incoming Hong Kong flight to an outgoing flight to Latin America.

So, Prime Minister Trudeau cannot evade responsibility for this hostage-taking, arrest and detention since his government had to consider the US request and judge whether it was politically motivated. Therefore, the matter must have been considered at the highest level; that’s Trudeau.

Since he has clearly ignored all the circumstances including the fact, firstly, that the offence alleged is not an offence in Canada and does not exist under international law; and secondly, that the US request is politically motivated with the objective of damaging both Iran and China, Trudeau made a political decision to authorize his security forces to arrest and detain Meng.

This was a political arrest. The rule of law in Canada has been suspended, at least in Meng’s case — and so it can be in anyone’s case.

But can we be surprised that the rule of law has ceased to exist in Canada when we remember that in 1999 Canada took part in the aggression against Yugoslavia? when it took part in the aggression against Iraq? when in 2004 its special forces assisted US Marines to put a gun to the head of President Jean-Bertrand Aristide of Haiti, kidnap him and exile him to Africa? when it took part in the invasion and occupation of Afghanistan, of Libya, of Syria? when this year it took in White Helmet elements of the proxy forces attacking Syria? when it has been involved in plots to overthrow the Venezuelan government, and the Ukrainian government where Canada supports the fascists who have taken power in Kiev? and when it supports the illegal “sanctions” that is economic warfare against Russia?

Canadians should be angry about their nation being led by people whose loyalty is to Washington instead of to the Canadian people whose interests they care nothing for. They should be angry about this slap in the face of the Chinese people for whom Dr. Norman Bethune, the great Canadian communist, died helping the People’s Liberation Army during the Long March and resistance to the Japanese in the 1930’s.

They should be angry about these traitors isolating Canada from China, from Russia, from Iran, condemning Canada to be nothing more than an outpost of the American empire. For traitors they are as they betray the Canadian people by serving the interests of the Americans and their war machine. Free Meng Wanzhou — for as long as she is held hostage, so are we all.

NOTE: The Ukrainian Foreign Minister of Canada, Chrystia Freeland, has endorsed the arrest of Meng, and instructed Canada’s ambassador to Beijing to explain. In Freeland’s statement to the local press, she “refused to discuss details of the case, citing the imperative of keeping politics out of a live court proceeding”. According to Freeland, “we are a rule-of-law country, and we will be following our laws as we have thus far in this matter, and as we will continue to do.”

Regarding the Canadian arrest of Meng, Lavrov added:

“It’s an arrogant, jingoist policy no one accepts. It already sparks rejection even amongst the US’ closest allies. It has to end.”

Christopher Black is one of the leading war crimes lawyers in Canada; he has acted in cases in Rwanda and the former Yugoslavia, including the defence of the former Yugoslav president, Slobodan Milosevic; for more, click. For more stories on US rigging of sanctions cases in foreign courts, read this. On political motivation in US extradition cases, start here.