Voting in Georgia in 21 Easy Steps

Watch this one-minute video of Ashlee Jones on the 21 “easy” steps required of a voter of color to cast a ballot in Georgia.

Learn more about our lawsuit and support our action with a tax-deductible donation. 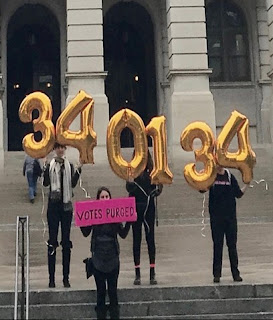 Georgia state police have arrested 12 Black Lives Matter protesters for hoisting balloons in front of the capital that spell out “340,134” — the number of voters the Palast team uncovered as wrongly purged from voter rolls by Brian Kemp.

Kemp was the Georgia Secretary of State and currently remains the Republican candidate for Governor.

Black Lives Matter activists were told not to protest in front of the capital, so they thought balloons would not be a threat to the state.

Obviously, they were wrong. Those arrested include Mary Hooks, who took the picture.

Greg Palast has written four New York Times bestsellers, including Armed Madhouse, Billionaires & Ballot Bandits, and The Best Democracy Money Can Buy, now a major non-fiction movie, available on Amazon — and can be streamed for FREE by Prime members!

Stay informed, get the signed DVD of the updated, post-election edition of The Best Democracy Money Can Buy: The Case of The Stolen Election, a signed copy of the companion book — or better still, get the Book & DVD combo.

Support The Palast Investigative Fund and keep our work alive! Become a monthly contributor and automatically receive Palast's new films and books when they're released!

Or support us by shopping with Amazon Smile. AmazonSmile will donate 0.5% of your purchases to the Sustainable Markets Foundation which automatically goes to the benefit of The Palast Investigative Fund and you get a tax-deduction! More info .