Where's the Corpus Delicti - The Skripal Case, the Gorilla Indictment 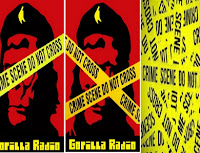 Moscow - By the standards our police, prosecutors, and judges are required to follow, the cases presented so far by the British Government in the Skripal poisoning and the Dutch Government in the Malaysia Airlines MH17 shoot-down fall short by a long way. Worse than unprovable to the criminal standard of beyond reasonable doubt, they are unpresentable in a court of law.

So long as this is so, the particulars of the offence presented in the media are no more than guesswork with political objectives, local and international.

The recent Dutch Government presentation of evidence of Russian espionage around the headquarters of the Organisation for the Prevention of Chemical Weapons (OPCW) proves no more than that the Russians were looking for evidence of the weapon in the alleged poisoning. That was evidence which had been officially requested by the Russian Government from the British Government, and been refused.

The British refusal was a violation of Article IX of the OPCW’s Chemical Weapons Convention For details of what Russian espionage then found, read this.

At the civil court standard of proof on the balance of probabilities, the published British evidence proves there were Russian espionage agents in Skripal’s town on the fateful day.

That doesn’t prove what the agents or Skripal himself did in what may have been –speculation alert! unpresentable in court!– an accident in handling hazardous substances, Skripal’s mishandling; Russian spies monitoring a British spy operation with Skripal on the British side; or a crime against Skripal.

Until Skripal himself is cross-examined in court, or presents himself in front of the press, we aren’t getting closer to knowing which.

In the annals of true crime – that’s to say an indictment which the Director of Public Prosecutions will present with his or her name on it in court — the Skripal case is unique. No corpse or corpus delicti; no weapon; no witness; no culprit; no modus operandi; no chain of custody for the evidence.

For the discussion with Chris Cook, listen to today’s Gorilla Radio broadcast from Victoria, British Columbia, between Minute 00:00 and 27:13.

Gorilla Radio is broadcast every Thursday by Chris Cook on CFUV 101.9 FM from the University of Victoria. The radio station can be heard here. The Gorilla Radio transcripts are also published by the Pacific Free Press and on the blog. For Chris Cook’s broadcast archive, click to open.