90,000 Purged in Vegas and Reno: Are You on the List that will Steal the Senate? 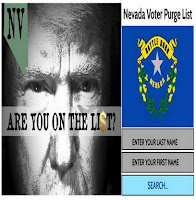 Today, The Palast Investigative Fund has released the names of the 90,000 residents of Las Vegas and Reno (Clark and Washoe counties) purged from voter rolls based on flawed evidence that indicates they have moved. Nevada is a Senate battleground state and these purges could tip the election.

Rather than face me in federal court, Nevada’s Republican Secretary of State, Barbara K. Cegavske, on Thursday turned over the list of every Nevada voter whose registration Cegavske cancelled in 2016 and 2017.

If you’re in Nevada, or know anyone in Nevada, please, please check the purge hit-list. If you’re a victim, you still have until Thursday, October 18 to re-register online. Then, This email address is being protected from spambots. You need JavaScript enabled to view it.: we need your story so we can take action to end this purge scourge.

Cegavske used the same notorious “purge by postcard” and “Crosscheck” methods of cleansing voter rolls as GOP Secretaries of State Brian Kemp of Georgia and Kris Kobach of Kansas.

Our experts, reviewing these lists, have found that the overwhelming majority of voters who have supposedly moved out of state or out of their home counties have, in fact, not moved an inch — most remain at their original registration address.

The NAACP and League of Women Voters have cited the “Crosscheck” program used in Nevada and other GOP states as wildly inaccurate and racially biased.

My investigation of these purge systems follows from my original exposé in Rolling Stone.

Nevada’s voting chief Cegavske withheld this data from me for nearly a year — until just one week before the close of voter registration.

Lawyers for the Palast Investigative Fund filed a 90-day notice that Cegavske would face a lawsuit on grounds of Nevada’s violation of the National Voter Registration Act of 1993 for failing to make public the names of voters whose registration the state cancelled and full reason for the cancellation.

The state continues to stonewall this reporter, withholding critical information about Nevada’s participation in the Interstate Crosscheck program. Specifically, thousands of Nevadans apparently lost their right to vote because the Crosscheck list, given to Cegavske by Kris Kobach of Kansas, contained erroneous information that these Nevadans were registered in other states.

Therefore, we are preparing a federal law suit against the state—which will follow our lawsuit against Cegavske’s fellow Secretary of State, Brian Kemp of Georgia — on similar grounds of withholding data on their massive purge operations.

We are preparing to give the purge lists to non-partisan, non-profit groups, including those affiliated with Black Lives Matter and the New Georgia Project who will help locate victims of the purge to help them re-register.

The Palast Fund’s legal actions are supported with the help and advice of the Southern Christian Leadership Conference, the Atlanta NAACP, and other civil rights organizations including the Rainbow/PUSH Coalition whose founder, Rev. Jesse L. Jackson, is my co-plaintiff in anti-purge litigation in Illinois.

Note: The Palast Fund, a 501c3 not-for-profit, non-partisan foundation project.. We have chosen not to solicit funds from the hundreds of thousands of people who have checked our purge files from Georgia, Indiana, Illinois and Nevada — because we don’t want to discourage anyone from visiting our site to save their rights. In just 25 hours, as the deadline for re-registration was closing, we received 1,900 notes of thanks from voters who found themselves on the purge list — and re-registered just in time. Thousands more used our information to restore their rights — and that makes our work worthwhile.

We will continue… as long as our exhausted team can physically stay awake and our finances permit it. I’m asking you to support our work to give me the wherewithal to finish this vital investigation and make the results public. You can make a tax-deductible donation to our foundation.

Greg Palast has written four New York Times bestsellers, including Armed Madhouse, Billionaires & Ballot Bandits, and The Best Democracy Money Can Buy, now a major non-fiction movie, available on Amazon — and can be streamed for FREE by Prime members!

Stay informed, get the signed DVD of the updated, post-election edition of The Best Democracy Money Can Buy: The Case of The Stolen Election, a signed copy of the companion book — or better still, get the Book & DVD combo.

Or support us by shopping with Amazon Smile. AmazonSmile will donate 0.5% of your purchases to the Sustainable Markets Foundation for the benefit of The Palast Investigative Fund and you get a tax-deduction! More info .