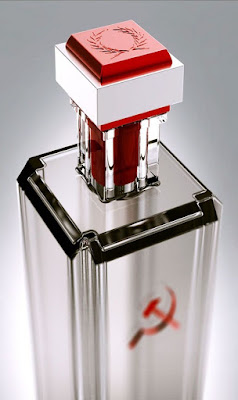 In response to Ukrainian Canadian Congress campaigning, two NDP MLAs recently convinced the Alberta Gaming and Liquor Commission to withdraw a brand of Russian vodka from its stores.

Alberta MLAs Deron Bilous and Jessica Littlewood argued that a hammer and sickle logo on a bottle of vodka was “offensive“.

Articulating a growing rightist effort to equate communism with Nazism in Eastern Europe, Ukrainian Canadian Congress Alberta chapter president, Olesia Luciw-Andryjowycz, told the Edmonton Journal that the hammer and sickle was akin to “having a swastika on a bottle of cognac.”

DiNovo was one of the NDP representatives that flirted with Ukraine’s hard right. She attended a Ukrainian parade in Toronto where some marched behind a banner titled “Right Sector Canada”. Its parent organization in the Ukraine said it was “defending the values of white, Christian Europe against the loss of the nation and deregionalisation.”

At another Toronto event NDP MP Peggy Nash shared a stage with a speaker from Ukraine’s Right Sector. Over the past four years, the NDP has backed a coup in Kiev, war in eastern Ukraine and NATO military build-up in Eastern Europe. In 2014 the right-wing nationalist Euro-Maidan movement ousted Viktor Yanukovych who was oscillating between the European Union and Russia.

The US-backed coup divided the Ukraine politically, geographically and linguistically (Russian is the mother tongue of 30% of Ukrainians). After Yanukovych’s ouster Russia reinforced its military presence — or “seized” — the southern area of Crimea and then organized a referendum on secession. Home to Moscow’s major Baltic naval base, Crimea had long been part of Russia and the bulk of the population preferred Moscow’s rule to the post-coup right wing nationalist government in Kiev. The NDP echoed the US/Stephen Harper government position on Ukraine. The day after Yanukovych fled, NDP MP Olivia Chow told a Euro-Maidan Canada rally in Toronto,

“we must be vigilant, we must ensure our government, our Canadian government, continues to keep an eye on the Ukraine to make sure that the Russians do not interfere.”

But, the NDP MP wasn’t bothered by Canadian interference in that country. Eighteen months after the coup the Canadian Press reported that opposition protesters were camped in the Canadian Embassy for a week during the February 2014 rebellion against Yanukovych.

“Canada’s embassy in Kyiv was used as a haven for several days by anti-government protesters during the uprising that toppled the regime of former president Viktor Yanukovych,” the story noted.

Ottawa played a similar role during the “Orange Revolution” a decade earlier. In a story headlined “Agent Orange: Our secret role in Ukraine,” Globe and Mail reporter Mark MacKinnon detailed how Canada funded a leading civil society opposition group, promised Ukraine’s lead electoral commissioner Canadian citizenship if he did “the right thing” and paid for 500 Canadians of Ukrainian descent to observe the 2004-05 elections.

“Eventually, he acted as the group’s spokesman and became a prominent critic of the Kuchma government’s heavy-handed media control. Canada also invested in a controversial exit poll, carried out on election day by Ukraine’s Razumkov Centre and other groups that contradicted the official results showing Mr. Yanukovych [winning].”

“with regard to Ukraine, yes, Putin is a danger. We stand firmly with Ukraine against the aggression by Russia.”

The NDP leader also reiterated the party’s call for harsher measures against Russian officials, naming two businessmen whom he said should be added to Canada’s list of Russians targeted for sanctions. In March 2014 NDP foreign critic Paul Dewar released a statement calling for “travel bans against certain Russian officials and suspending trade with Russia’s military sector.”

Five months later the NDP put out a press release under the headline “Conservatives shield Russian business elite from sanctions: Toothless sanctions are out of step with Canada’s closest allies.”

In 2017 NDP foreign critic Hélène Laverdière applauded a bill modeled after the US Magnitsky Act that would further strain relations between Ottawa and Moscow by sanctioning Russian officials. NDP MPs voted for legislation Laverdière labelled an “important step to support the Global Magnitsky movement.” In summer 2016 NDP defence critic Randall Garrison expressed support for Canada leading a NATO battle group to Latvia as part of a ratcheting up of tensions with Russia.

Four hundred and fifty Canadian troops are currently leading a 1,000-strong NATO force in Latvia while the US, Britain and Germany head missions in Poland, Lithuania and Estonia. As vice-chair of Parliament’s Standing Committee on National Defence, Garrison endorsed a December report titled “Canada’s support to Ukraine in crisis and armed conflict.” It denounced Russia’s “war of aggression against Ukraine” and lauded Canada’s “support of Ukraine in its fight against Russia.” Deploying Canadian troops to the Russian border and Alberta MLAs pushing to ban Russian vodka both empower rightists in Eastern Europe.

They are part of a troubling game of brinksmanship with Russia. Is this really in Canada’s interest? And why is the NDP enabling the agenda of extreme right forces?