Defecation in Public - Was It Soft or Hard When White House Officials Did It On the Canadian Prime Minister? Is Chrystia Freeland Also Aiming at Justin Trudeau? 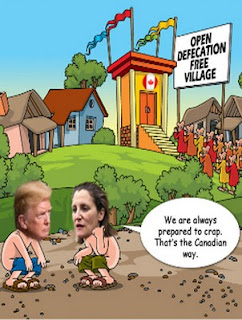 “I always ask the police whether it’s soft or hard,” the BBC quoted its expert, Professor Mike Berry, a clinical forensic psychologist at Birmingham City University.

“They look at me like I’m absolutely mad. And I say, if it’s soft, then it’s somebody who’s anxious, so you get a kid who goes and craps on the bed. And if it’s really hard stool then it’s an indication of somebody who’s angry and bitter about what he’s doing.”

To Canadian political analysts, the weekend attacks on Prime Minister Trudeau are the worst insults from the US Government in remembered history. They aren’t sure whether they are soft, because Trump is anxious; or hard because the Americans want to destroy Trudeau politically.

Canadian analysts agree that Trudeau and his Liberal Party government have been weakening in the Canadian polls for the election due on October 21, 2019. The analysts are divided, however, on whether the impact of the American attacks on Trudeau will trigger a patriotic rally in support of the prime minister, or steady erosion of his party support and a gain in Foreign Minister Chrystia Freeland’s (lead image, right) ambition to replace Trudeau. One of Freeland’s backers, a veteran Canadian official, claims “the Trump people hate Chrystia before any and all.” He was unable to provide any evidence for this.” Other Canadian sources say that in the American government’s attitude towards Freeland, there is “nothing of the kind.”

The most recent Canadian political polls, published on May 22, show the Canadian Conservative Party, led by Andrew Scheer, has moved sixteen percentage points ahead of Trudeau’s Liberals in the hypothetical election vote. Follow the red line for the Liberals down, and the rising blue (Conservatives, Tories) and green lines (New Democratic Party, NDP) up. Translating these results into seats in the Ottawa parliament, the Tories would win a majority of 234; the Liberals would be left with 72. At present, the Liberals hold 183 seats; the Tories 96; the NDP 43. Trudeau’s personal approval rating has been steadily dwindling since it peaked two years ago, in July 2016. Since February of this year his score has accelerated downwards. Trudeau’s behaviour on a state trip to India, and an earlier Bahamas holiday paid for by a rich friend, have driven this decline, according to the Canadian press. Canadian pollsters say their measurements show Canadian voters think Trudeau’s biggest liability is that he has been weak and unconvincing in foreign policy. The latest American insults, they believe, will either make or break Trudeau with Canadian voters.

The Trump Administration’s threats to impose penalty tariffs on Canadian exports of steel, aluminium, automobile and farm products have already triggered massive hostility across the country, creating an anti-American sentiment in favour of retaliation which Trudeau could not resist.

“Mr. Trump has managed to unite Canadians to an extent that few issues do”, reports the Abacus polling company.

“Opposition to the US tariffs is roughly 80% in every part of the country. Conservative voters are 82% against Mr. Trump on this issue, NDP voters 80% and Liberals 87%.”

The week before Trump and his officials attacked Trudeau personally, this was how Canadians said they were ready to retaliate on their own: On Saturday, after Trump had left the G7 summit meeting in Canada early, he tweeted that Trudeau had been double-talking — “meek and mild” during the face-to-face meetings at the summit table, then “very dishonest and weak” after Trump’s departure. Accusing Trudeau of making “false statements”, Trump said the US was refusing to sign the communique which had already been agreed by the G7 leaders, himself included.

Trump was then followed in the attacks on Trudeau by his economic advisor Kudlow, who accused Trudeau of a “sophomoric play”, of “stab[bing] us in the back”, and of “betrayal”. “POTUS [president of the United States] is not gonna let a Canadian prime minister push him around, push him, POTUS, around,” According to Kudlow, Trudeau’s press conference after the summit meeting was a pitch “for domestic political consumption”.

The words Trudeau had used which Kudlow was referring to were:

“I have made it very clear to the President that it [retaliatory trade tariffs] is not something we relish doing, but it is something that we absolutely will do because Canadians — we’re polite, we’re reasonable, but we also will not be pushed around.” “There’s a special place in hell for any foreign leader that engages in bad faith diplomacy with President Donald J. Trump and then tries to stab him in the back on the way out the door. And that’s what bad faith Justin Trudeau did with that stunt press conference. That’s what weak, dishonest Justin Trudeau did.” With a tweet of his own, Bolton, Trump’s national security advisor, joined the attack on Trudeau from on board the president’s aircraft enroute to Singapore.

“Just another #G7 where other countries expect America will always be their bank. The President made it clear today. No more.”

For details in the Canadian press of the G7 meetings which led to the American defecation, read this. The Twitter feed by a Toronto reporter also illuminates the Canadian reaction behind the scenes. For Canadian calculations of the trade flows with the US, identifying the mistakes and misrepresentations of the US trade negotiator, Robert Lighthizer, click to open this.

CTV went to air with Freeland’s press remarks late on Sunday afternoon in Quebec. For Freeland’s attempt to say the same in French, watch this: https://www.youtube.com/watch?v=4dQCxPGI8as Min. 3:30.

“What I object to very strongly,” Canada’s Foreign Minister Freeland declared in Quebec City, after the American attacks on Trudeau had been published, “is the illegal and unjustified imposition of tariffs on Canadian steel and aluminium. Ahhh, the national security pretext is absurd, and frankly, insulting.”

Freeland did not defend her prime minister directly

Freeland has been forced on to the defensive in her own constituency after the crushing defeat of the Liberal party in the Ontario provincial election on June 7. “A total collapse of the Liberals”, a Toronto newspaper called the result.

The outcome in the Toronto riding of University-Rosedale, which Freeland represents in the federal parliament, was a defeat for the candidate she campaigned for by more than two votes to one. The outcome puts in doubt Freeland’s survival in the federal election in sixteen months’ time.

“The Americans are shitting on Trudeau this weekend,” commented a Toronto source, “but last weekend Ontario voters were shitting on the Liberals.”

Following the US attacks, Freeland has responded:

“We particularly refrain from ad hominem attacks particularly when it comes to our relationships with our allies.” “We are always reasonable… always prepared to talk. That’s the Canadian way.”

“At the end of the day, common sense will prevail.”

Freeland also participated in a New York Times promotion, which was published on June 9. In response to Canadian reporting of her support of her maternal grandfather’s role in the liquidation of Jews and Russians during World War II, Freeland switched grandfathers and their war records for the New York Times reporter. She reportedly “spoke emotionally about her grandfather’s fighting — and her great-uncle’s dying — in the Second World War.” The newspaper didn’t realize Freeland was referring to her father’s Canadian father, not her mother’s Ukrainian father, Michael Chomiak, who was a propaganda agent and spy employed by the Germany Army in occupied Poland, Austria, and finally in Bavaria. For that story, read this. For more on Freeland’s attempt to promote her political career through the Obama Administration and Hillary Clinton, read this. For the role of George Soros in financing Freeland, click.

Has Freeland been signalling to US officials, as well as to Liberal Party colleagues, that she will make a better Canadian prime minister for the future than Trudeau?

“This is barking”, a veteran Canadian official reacted.

“The Trump people hate Chrystia before any and all. She has driven them nuts over NAFTA [North American Free Trade Agreement]. The explanation of all this is that Trump is nuts.”

The source was asked to provide evidence of “hate for Chrystia before any and all”. He was unable to respond. No evidence of US Government hostility towards Freeland has been found.