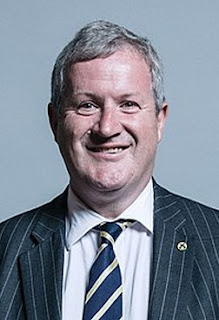 Ian Blackford MP, investment banker and now SNP Westminster parliamentary leader, has received an “intelligence briefing” from the security services and is satisfied with MI6 assurances that Assad attacked Douma with chemical weapons. The whirring sound you hear is Willie Macrae spinning in his grave.

The other whirling sound you hear is Charlie Kennedy spinning in his. Charlie – who was a friend since 1979 – once told me that the scariest walk he ever took was to get the security service briefing on the Iraq War.

He was scared in case the intelligence was actually convincing on Iraqi WMD – what would he do then?

Charlie said that when he saw the actual intelligence he was astonished by how weak it was, and left with a clear mind – and a lifelong distrust of MI6. But Charlie Kennedy, though we disagreed on Scottish independence, was a very decent man of great principle. Not an Establishment hack like investment banker Ian Blackford MP.

The SNP is attempting to be all things to all men by attacking the government for not having a parliamentary vote on the attack on Syria, while accepting the British establishment narrative. I am not sure if Blackford is saying there should have been a vote because he missed the chance to vote for the war, or if he is going to accept that the attack was illegal in international law.

Nicola Sturgeon joined Boris Johnson on day one of the Salisbury attack in blaming Russia with no evidence and cheering for Britnat jingoism. Blackford promotes the entirely dodgy Douma narrative. The SNP leadership could not be more divorced from the views of its own grassroots membership.

Craig Murray is an author, broadcaster and human rights activist. He was British Ambassador to Uzbekistan from August 2002 to October 2004 and Rector of the University of Dundee from 2007 to 2010.