Man in the Glass 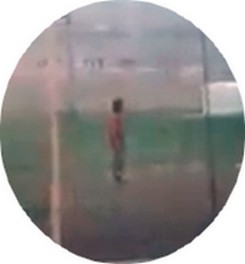 The image in the circular frame is blurry; as though seen through the bottom of a shot glass held in front of the eye, drifting focus on an object some four-hundred meters away. The figure is a thin vertical stripe in the middle of the magnifying lens.

There are voices in the background of the video, men or boys bantering in the manner of a sports bench, or locker room.

There's a small jolt, and the distant figure is seen to drop to the ground. A rise in the voices; excitement now on the bench for a scoring shot.

"What a legendary film! I haven't seen this kind of thing for a long time."

The man brought down so far away, in a field in Gaza, is of course Palestinian. The rifleman, shooting with such cool precision, an Israeli soldier. The voices cheer in Hebrew. Hundreds of meters away, Arabic voices are raised too, as young Palestinians run to the aid of their fallen comrade.

The Jerusalem Post reports,1 Tamer Abu Daqqa saying he was the man shot in the December 2017 video, uploaded to the internet. He says he's a resident of the refugee camp that became Khan Younis, southern Gaza Strip.

The "riot" the Israeli Defense Forces (IDF) say he was taking part in at the time of the shooting wasn't as the military describes. Tamer says he was shot for simply trying to bring children too afraid to run from a field come under-fire by the soldiers from the other side of the Wall.

"I began moving in their direction and called out to them that I was coming, so that they would be brave, and then the Jews shot me."

The IDF is upset about the incident, saying it will punish the soldier who released the video.2

Months later, the situation at the Gaza barrier has become more deadly. The Great March of Return, the campaign mounted to commemorate the long years of the Nakba, or "catastrophe" runs counter-point to celebrations of Israel's 70th birthday. As mid-April approaches, more than 33 Palestinians have lost their lives over the course of three Friday demonstrations; shot down by the IDF's notorious snipers. Thousands more have been wounded.3

But, this article is not about the dispossession of the Palestinian people, or their long fight for, as the slogan points out, 'Return'. Neither is it about those on the other side who prosper from the lands taken.

Rockets landed on the other side of Israel's border with Syria in the wee hours of Saturday, April 14th, 2018. Some twelve hours later, America's president was up and tweeting about it. Trump wrote,

"A perfectly executed strike last night. Thank you to France and the United Kingdom for their wisdom and the power of their fine Military. Could not have had a better result. Mission Accomplished!"4

Perfection of execution aside, what the leaders of this trio of nations did in Syria is a crime. International law expressly forbids nations bombing each other; that's obvious. The day after, media and various government agencies spun narratives to justify in the court of public opinion illegal actions. But, as any jurist will tell you, there are no good reasons to do bad things. Once a crime is committed, within a judicial system, the criminal must be made answerable.

If the World operated within such a system, Donald Trump, Emmanuel Macron, and Theresa May would be in custody today, but the law hasn't asserted itself as regards these kinds of crimes for a long time; at least not when committed by the likes of them. It is not without irony, whether intended or not, President Trump echoed George W. Bush's admission of his crimes "accomplished" in Iraq, arguably the 'Mother' of all that followed these last terrible years in the region. It serves reminder to the "international community" that Trump, May, Macron, and their ilk are exceptions to the rule of international law.

But, this article is not about disposing of international law, making of it an instrument of convenience to be wielded by the powerful over the weak. Neither is it about those in Syria beneath the rockets and bombs falling, erased from existence in reality as easily as the memory of them is from the abstracted conscience of glib politicians, Machiavellian generals, or cynical network reporters thousands of miles distant.

Instead, this is about values; not the amorphous, most often hypocritical, platform pronouncements made by electioneering aspirants to power, but the enduring tenets governing the way we live our lives; the core of us, what we hold inalienable.

A man living in a less civilized age, a time plagued by absolute despotism, endemic injustice, and festering political intrigues wrote, "What a piece of work is man, How noble in reason, how infinite in faculty, In form and moving how express and admirable, In action how like an Angel, In apprehension how like a god..." 5

But would Hamlet, knowing the military-industrial complex, pressure of the Lobby, and 24 hour news cycle ponder less, hastening his hand against Claudius? 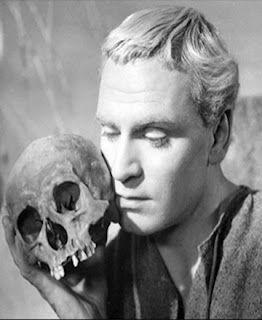 Would, one wonders, the doomed Danish prince, were Donald's "to bomb, or not to bomb" dilemma his, consider primarily the polling numbers, and political leverage to be gained through the sacrifice of unknowable numbers of remote nobodies, maintaining, "Man delights not me; no, nor Woman neither..." while stabbing the button of his terrible revenge five score and three times?

Would it all climax in the second act, our Hero scorning conscience as cowardly, and so ending further inquiry?

No, it isn't the primacy of justice, or need for such to ensure civilization's continuance in question here, but the composition of this "quintessence of dust".

What Hamlet's master, Shakespeare can't enlighten us on, nor can anyone, is the ineluctable mystery of death. Whether it's ever just to dispatch another to that "undiscover'd country" is more easily dealt with though; in cases of doubt, the answer must always be, "No."

Friday coming, the masses of the dispossessed of Palestine will again manifest beneath the earthen walls girding Gaza. The women and men will throw stones and hurl insults at the intractable facts of their imprisonment, while perched on the crest of the berm above, men will look through their magnified rifle lenses, taking aim at "The beauty of the World, The paragon of animals".

But that they would pause to question the mystery of life, and doubt before pulling the triggers ending it.

Chris Cook serves as managing editor at PacificFreePress.com, and hosts the public affairs program, Gorilla Radio, broad/webcast from the University of Victoria, Canada.