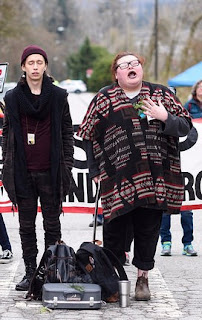 Following the estimated 10,000 person-strong march and rally against Kinder Morgan March 10, demonstrations of resistance have continued at Kinder Morgan’s Burnaby Mountain tank farm, where the company plans to triple the number of tanks holding diluted bitumen and crude oil in this densely populated suburb of Vancouver.

“As a health professional, I have come to understand the value of life. This pipeline represents death for the people, animals, and plants that depend on a healthy planet to survive, and we need to do whatever we can to stop it. This is one time we can really make a difference. There area lot of us here and still coming”

Gary Relyea: “We are very disappointed with Prime Minister Trudeau. He has broken his promise to Indigenous people and to act in climate change and meet our commitments for the Paris Accord. It’s time to stop the expansion of the oil sands.”

Anne Reylea: “I support First Nations in their fight to protect the water, and to do our point in reconciliation. I need to make sure our government knows that they have to respect the United Nations Declaration on the Rights of Indigenous People (UNDRIP).”

Susan Quipp, a former pediatric nurse from Victoria who was arrested on Wednesday,

“I’m not sure why everyone keeps asking me why I’m protesting today -- the real question is, ‘Why isn’t everyone protesting today? The potential health implications of this pipeline are enormous and far reaching -- from spills poisoning our water and soil, to the public health impacts of a warming global climate -- the impacts will likely be devastating.”

“We lived and worked in fear when I worked for Trans Mountain, because the reality is that no amount of equipment or people is going to change the fact that in the event of a spill, they will be able to recover very little.”

Early Monday, a 70-year-old grandfather scaled and set up camp in a tree directly in the path of Kinder Morgan’s clear-cutting activity. He was arrested and removed at 8:00 p.m. by the B.C. RCMP Emergency Response Team (ERT).

One of Canada's most successful tech entrepreneurs, Tim Brae, was one of the first arrested for refusing to leave Kinder Morgan's gates. He wrote about it here.

Current opposition to Kinder Morgan’s pipeline and tanker project includes the Province of British Columbia, the state of Washington, the cities of Vancouver, Burnaby, and Victoria and 19 other BC municipalities as well as 250,000 petition signers. More than 23,000 have taken a pledge to do “whatever it takes” to stop Kinder Morgan.

One-in-ten British Columbians, and one-in-four opponents of Kinder Morgan’s new pipeline in British Columbia say they would be willing to take peaceful civil disobedience to resist the pipeline.

Will be updated throughout the day.