Rachel Notley’s Alliance with the Enemies of Tenure, Peer Review, and Academic Freedom at Alberta’s Universities - An Open Letter to the NDP Premier of Alberta 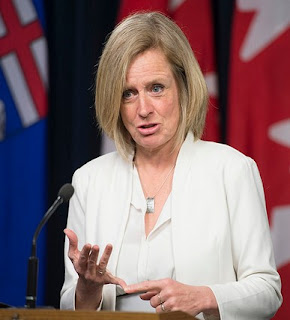 Dear Premier Rachel Notley; I am writing you this open letter to defend myself against your attack on me personally and professionally.

What is the evidentiary basis behind your characterization of my academic work as “repulsive, offensive and not reflective of Alberta”?

Why have you decided to set yourself up, Premier Notley, as some sort of arbitrator of what scholarly work in Alberta universities meets the criteria of being “reflective of Alberta”?

Is your opinion about what is or is not reflective of Alberta to become a new test of how curriculum will be created and how faculty members will be chosen in this province?

What lies behind your decision to disseminate a caricature of me “standing at the head of the class” in order to “spread lies and conspiracy theories”? [1]

Since I began teaching in the Department of Native American Studies at the University of Lethbridge in 1990, I have never once seen in a student evaluation that reflects the kind of accusations you are pressing publicly on me. How is it you think you know more about me, including and what goes on in my classroom, than my own students?

After a year and a half of being subject to a ruthless trial-by-media, a new process is only now being initiated that from my perspective allows me to come forward for the first time to tell my side of the story before an investigating tribunal operating within the terms of our collective agreement. The process is going forward because of a court contestation that the U of L Board of Governors lost due to its unwillingness to adhere to the laws of labour relations in Alberta. Whose advice was the Board depending on when its members put themselves in such an untenable position?

Before we have even started the process that has come about because of the determined stand of the University of Lethbridge Faculty Association (ULFA) and the Canadian Association of University Teachers (CAUT), you, Premier Notley, chose to inject a politicized salvo into the onslaught of vituperation against me that began on Aug. 26 of 2016.

Here is how the University of Lethbridge Faculty Association described your ill-advised political intervention:

The Faculty Association wishes to express its disappointment in the Premier’s words. As the union that represents Professor Hall in his employment relationship with the University of Lethbridge, the Faculty Association has endeavoured to have a fair and objective process employed for adjudicating Professor Hall’s academic scholarship and accountability through procedures in the collective agreement. We finally achieved this following significant effort and cost on our part and have a great deal of confidence in the appropriate academic procedures to which Professor Hall is now subject.
Having the Premier draw conclusions about the acceptability of Professor Hall’s academic work prior to any decision rendered by an expert panel of qualified academics has the potential to undermine this very process we have fought to achieve. At worse, though, these words have the real potential to bias the outcome of any such fair and objective process.
The Faculty Association has greatly appreciated the hard work the Premier and her government have done to advance the rights of post-secondary labour. We believe it is a dangerous precedent, however, for elected officials to intervene so directly in a complex labour matter such as this one.

One of the core points I intend to bring forward in my self- defense in the forthcoming process, is to describe the mounting of a negative media campaign against me based on the atrocious contents of a maliciously-engineered Facebook post. According to B’nai Brith Canada, the core agency in orchestrating this media deception, the post appeared on, and then disappeared from, my Facebook wall during an interval of a few hours on Aug. 26, 2016. I did not invite this digital item onto my Facebook wall. I did not sanction its abhorrent contents. In fact I condemned the post’s contents publicly in mid-Sept. when I first became aware of the digital item and the way that it was being deployed to destroy my reputation.

You, Premier Notley, were presented with a deceptive account of my relationship to the Facebook post long before I even knew about the B’nai Brith Canada operation. Recently I learned from the results of a FOIP investigation of the Alberta Ministry of Justice that on Aug. 27, 2016 you and other Alberta cabinet ministers were sent a slanderous account of the Facebook post as if it “came from my lips.” People in the inner circle of your office reported you had seen the communication that slanderously misrepresented me as an “advocate for the murder of Jews.”

If you would actually take a genuine interest in my academic work, Premier Notley, you would realize I have a record of studying all sorts of genocide and condemning this crime against humanity in all its manifestations, including the Jewish Shoah. [2]

Perhaps the people who lied to you about me in late August of 2016 are still holding you captive in terms of filtering the information that has caused you to think whatever it is you believe you know about me. The President of the University of Lethbridge, Dr. Michael J. Mahon, went along with the Facebook deception to suspend this tenured full professor on Oct. 3 and 4, 2016. I was pulled from the classroom in mid-term and banned from stepping foot on campus. This purge took place entirely outside the terms of the collective agreement between the university’s faculty and administration.

This suspension initially without pay essentially declared me guilty until proven innocent. Severe punitive measures were imposed on me all without even an ounce of adjudication by a neutral third-party. From the correspondence I have been receiving from all over the world, I can say my suspension quickly became a shot heard throughout the global academic realm, a shot signaling that an Albertan university is leading an attack on the institutions of tenure, peer review and academic freedom.

Now you have joined in that attack too Premier Notley. You have allied yourself with the position of B’nai Brith Canada, the organization that recently interfered in the leadership race for the new leader of the federal NDP. The same people that set in motion the trial-by-media aimed at me attacked the NDP leadership candidate, Niki Ashton. According to B’nai Brith’s CEO Michael Mostyn, Ms. Ashton’s concern for the violated human rights of Palestinians people made her “an advocate for vile terrorists” and “convicted murders.” It revealed Ms. Ashton’s “defective moral compass.” [3]

What is your view, Premier Notley, of the condemnation directed at the new NDP federal leader, Jagmeet Singh, when B’nai Brith Canada took aim at him for intervening to provide a venue at the Ontario provincial legislature for a presentation by academic advocates of the rights of educator Nadia Shoufani. The condemnation came in late Augusts of 2016 when Mr. Singh was MLA for the riding of Bramalea-Gore-Malton and Deputy Leader of the Ontario NDP.

At the same time as it was attacking Jagmeet Singh, B’nai Brith Canada was leading the effort to have Ms. Shofani, a Canadian of Palestinian and Christian background, criminalized by police and fired from her teaching job in the Dufferin-Peel Catholic School Board. The criticisms directed at Ms. Shoufani are similar to those directed at Ms. Ashton. Similarly, the effort to criminalize Ms. Shoufani and bar her from the classroom anticipated the similar treatment to which I was about to be subjected. The attack on Ms. Shoufani’s job and her reputation was based on allegations about her supposed “terror-supporting remarks” made in a Quds Day speech in Toronto in July of 2016. [4]

It seems, Premier Notley, your political intervention on the wrong side of the University of Lethbridge case reflects your reactionary alliance with the thought police and speech police at B’nai Brith Canada. Your reactionary stance identifies you with the backward policies of former NDP leader, Tom Mulcair, when he purged pro-Palestinian candidates from the federal election of 2015. This atrocious move was in all probably a significant factor in the disappointing electoral showing of the NDP as it lost its position of Canada’s Official Opposition Party. [5]

Now in Feb. of 2018 B’nai Brith Canada has resumed its efforts to quarterback the NDP, lobbying aggressively to stop a resolution from being put on the floor of the recent NDP convention. The vote, neverthess, was close, 189 for putting the resolution forward and 200 for sidelining it. The resolution included provisions on a Canadian boycott against products produced in the illegal Israeli settlements in the Occupied West Bank.

Those supporting the boycott resolution included the unanimous support of the Young New Democrats, 28 electoral riding associations covering six provinces and many current and former MPs. Geneviève Nevin, a supporter of the resolution from Victoria, observed, “There’s a generational divide on this issue.” In his account of this divide within the NDP, journalist Derrick O’Keefe suggested Jagmeet Singh would be wise to look to the example of Jeremy Corbyn in the UK. Mr. Corbyn has mobilized on behalf of the Labour Party considerable electoral support from his attentiveness to the plight of Palestinian people under Israeli occupation. [6]

By siding so strongly, Premier Notley, with the U of L administration’s collaboration with the Isreal lobby including B’nai Brith Canada and the Centre for Israel and Jewish Affairs, you have identified yourself and your government with agencies that condemned Hassan Diab wrongly as a terrorist. B’nai Brith Canada played a major role in calling for pulling the sociology teacher from his Carleton University classroom in Ottawa. This intervention helped set in notion a miscarriage of justice that saw the Lebanese Canadian academic incarcerated for a decade in Canada and France for a crime he didn’t commit. [7]

You have identified yourself and your government, Premier Notley, with notorious enemies of academic freedom who brought forward during the 50th anniversary of York University all sorts of false allegations much like those I am facing now. This fiasco unfolded when B’nai Brith Canada, the CIJA, the Canadian Jewish Congress and the Jewish Defence League tried to shut down an academic conference on Israel/ Palestine at York University in 2009.

In 2018 in Alberta the equation is very different. The President and Board of University of Lethbridge have adopted the position of the Israel lobby. Now Premier Notley, you have intervened to strengthen this political coalition favouring the stiffling of free and open debate at Alberta universities. Please consider revisiting you provocative and intellectually bankrupt position on this matter.

There is no question that the views of this individual are repulsive, offensive and not reflective of Alberta. Our classrooms are a place for freedom of speech and expression but that does not mean individuals get to stand at the head of the class and spread lies and conspiracy theories. I am terribly disappointed to learn that this individual has been reinstated, but let me be clear that legislation that our government introduced did not give him his job back. I can confirm that this individual is now under investigation by a committee at the University.”