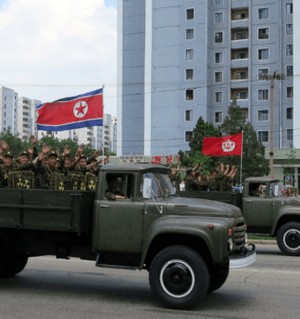 Here’s what the media isn’t telling you about North Korea’s recent missile tests.

Last Monday, the DPRK fired a Hwasong-12 intermediate-range ballistic missile over Japan’s Hokkaido Island. The missile landed in the waters beyond the island harming neither people nor property.

The media immediately condemned the test as a “bold and provocative act” that showed the North’s defiance of UN resolutions and “contempt for its neighbors.”

“Threatening and destabilizing actions only increase the North Korean regime’s isolation in the region and among all nations of the world. All options are on the table.”

What the media failed to mention was that, for the last three weeks, Japan, South Korea and the US have been engaged in large-scale joint-military drills on Hokkaido Island and in South Korea. These needlessly provocative war games are designed to simulate an invasion of North Korea and a “decapitation” operation to remove (Re: Kill) the regime.

North Korea’s supreme leader, Kim Jong-un has asked the US repeatedly to end these military exercises, but the US has stubbornly refused. The US reserves the right to threaten anyone, anytime and anywhere even right on their doorstep. It’s part of what makes the US exceptional. Check out this excerpt from an article at Fox News:

“More than 3,500 American and Japanese troops kicked off a weeks-long joint military exercise Thursday against the backdrop of an increasingly belligerent North Korean regime. The exercise, known as Northern Viper 17, will take place on Hokkaido — Japan’s northern-most main island — and will last until Aug. 28….

“We are improving our readiness not only in the air, but as a logistical support team,” Col. R. Scott Jobe, the 35th Fighter Wing commander, said in a statement. “We are in a prime location for contingency purposes and this exercise will only build upon our readiness in the case a real-world scenario occurs.” (US, Japanese troops begin joint military exercise amid North Korea threat”, Fox News)

Monday’s missile test (which flew over Hokkaido Island) was conducted just hours after the war games ended. The message was clear: The North is not going to be publicly humiliated and slapped around without responding. Rather than show weakness, the North demonstrated that it was prepared to defend itself against foreign aggression. In other words, the test was NOT a “bold and provocative act” (as the media stated) but a modest and well thought-out response by a country that has experienced 64 years of relentless hectoring, sanctions, demonization and saber rattling by Washington. The North responded because the Washington’s incitements required a response. End of story.

And the same is true of the three short-range ballistic missiles the North tested last week. (two of which apparently fizzled out shortly after launching.) These tests were a response to the 3 week-long joint-military drills in South Korea which involved 75,000 combat troops accompanied by hundreds of tanks, armored vehicles, landing craft, heavy artillery, a full naval flotilla and flyovers by squadrons of state of the art fighters and strategic bombers. Was the North supposed to sit on its hands while this menacing display of brute military force took place right under its nose???

Of course not. Imagine if Russia engaged in a similar operation over the border in Mexico while the Russian fleet conducted “live fire” drills three miles outside of San Francisco Bay. What do you think Trump’s reaction would be?

He’d blow those boats out of the water faster than you could say “Jackie Robinson”, right?

North Korea should be applauded for showing that it won’t be intimidated by the schoolyard bully. Kim knows that any confrontation with the US will end badly for the North, even so, he hasn’t caved in or allowed himself to be pushed around by the blustering, browbeating thugs in the White House. Booyah, Kim.

By the way, Trump’s response to Monday’s missile test was barely covered in the mainstream media, and for good reason. Here’s what happened two days later:

On Wednesday, a US-led flight-group of F-35B fighters, F-15 fighters and B-1B bombers conducted military operations over a training range east of Seoul. The B-1B’s, which are low-altitude nuclear bombers, dropped their dummy-bombs on the site and then returned to their home base. The show of force was intended to send a message to Pyongyang that Washington is unhappy with the North’s ballistic missile testing project and is prepared to use nuclear weapons against the North if it fails to heed Washington’s diktats.

So Washington is prepared to nuke the North if they don’t straighten up and do as they are told?

It sure looks that way, but who really knows? In any event, Kim has no choice but to stand firm. If he shows any sign of weakness, he knows he’s going to end up like Saddam and Gaddafi. And that, of course, is what’s driving the hyperbolic rhetoric; the North wants to avoid the Gaddafi scenario at all cost. (BTW, the reason Kim has threatened to fire missiles at the waters surrounding Guam is because Guam is the home of Anderson Airforce Base which is the point-of-origin for the B-1B nuclear-capable bombers that have been making threatening flyovers on the Korean Peninsula for some time now. The North feels like it has to respond to that existential threat.

Wouldn’t it help if the media mentioned that fact or does it better serve their agenda to make it look like Kim is barking mad by lashing out against the ‘totally innocent’ United States, a country that only seeks to preserve the peace wherever it goes?

Give me a break!

It is so hard to find anything in the media that doesn’t reflect Washington’s bias and hostility. Surprisingly, there was pretty decent article at CBS News last week written by a former Western intelligence officer with decades of experience in Asia. It’s the only article I’ve found that accurately explains what’s really going on beyond the propaganda. Check it out:

“Prior to President Trump’s inauguration, North Korea made it clear it was prepared to give the new U.S. administration time to review the policy and come up with something better than President Obama’s. The only wrinkle was that if the U.S. went full-steam ahead with its annual joint exercises with South Korea (especially if that were accompanied by more talk of “decapitation” and more flights of strategic bombers over the Korean peninsula), the North would react strongly.

In short, the U.S. did, and the North reacted.

Behind-the-scenes contacts went up and down, but couldn’t get traction. In April, North Korean leader Kim Jong Un paraded new missiles as a warning, to no effect. The regime launched the new systems, one after another. Still, Washington’s approach didn’t change.” (Analysis: Pyongyang’s view of the North Korea-U.S. crisis”, CBS News)

Okay, so now we know the truth: The North gave it their best shot and came up snakeeyes, mainly because Washington doesn’t want to negotiate, they’d rather twist arms (Russia and China), tighten the embargo and threaten war. That’s Trump’s solution. Here’s more from the same piece:

“On July 4, after North Korea’s first successful intercontinental ballistic missile (ICBM) launch, Kim sent a public signal that the North could put the nuclear and missile programs “on the table” if the U.S. changed its approach.

The U.S. did not, so the North launched another ICBM, very deliberately deeming it a warning to the U.S. that they were to be taken seriously. Still, more B-1 bombers flew over the Peninsula, and the U.N. Security Council passed new sanctions.” (CBS News)

So, the North was ready to do some serious horse-trading, but the US balked. Kim probably heard what a wheeler dealer Trump was and figured they could work something out. But it hasn’t happen. Trump has turned out to be a bigger bust than Obama, which is pretty bad. He not only refuses to negotiate but he also delivers bellicose threats almost every day. This isn’t what the North was expecting. They were expecting a “non interventionist” leader who might be receptive to a trade-off.

The current situation has left Kim with no good options. He can either cave in and terminate his missile program altogether or increase the frequency of the tests and hope that they pave the way for negotiations. Kim chose the latter.

Did he make a bad choice?

Is it a rational choice?

The North is betting that its nuclear weapons programs will be valuable bargaining chits in future negotiations with the United States. The North has no plan to nuke the west coast of the United States. That’s ridiculous! That doesn’t accomplish anything. What they want is to preserve their regime, procure security guarantees from Washington, lift the embargo, normalize relations with the South, extricate the US from the political affairs of the peninsula, and (hopefully) end the irritating and endlessly provocative 64 year US occupation. Yankee go home. Please.

Bottom line: The North is ready to deal. They want negotiations. They want to end the war. They want to put this whole nightmare behind them and get on with their lives. But Washington won’t let them because Washington likes the status quo. Washington wants to be a permanent feature in South Korea so it can encircle Russia and China with lethal missile systems and expand its geopolitical grip bringing the world closer to nuclear Armageddon.

That’s what Washington wants, and that’s why the crisis on the peninsula will continue to boil.