Why I Reject Western Courts and Justice 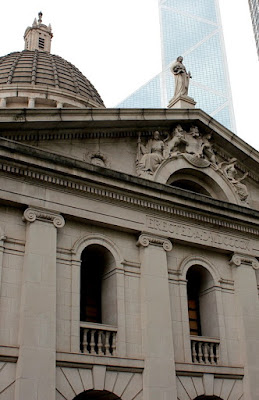 There is a small courthouse from the ‘British era’, standing right in the center of Hong Kong. It is neat, well-built, remarkably organized and some would even say – elegant.

Earlier this year I visited there with an Afghan-British lawyer, who had been touring East Asia for several months. Hong Kong was her last destination; afterwards she was planning to return home to London.

The Orient clearly confused and overwhelmed her, and no matter how ‘anti-imperialist’ she tried to look, most of her references were clearly going back to the adoptive homeland – the United Kingdom.

“It looks like England,” she exclaimed when standing in the middle of Hong Kong. There was clearly excitement and nostalgia in her voice.

To cheer her up even more, I took her to the courthouse. My good intentions backfired: as we were leaving, she uttered words that I expected but also feared for quite some time:

You know, there are actually many good things that can be said about the British legal system.

I thought about that short episode in Hong Kong now, as I drove all around her devastated country of childhood, Afghanistan. As always, I worked without protection, with no bulletproof vests, armored vehicles or military escorts, just with my Afghan driver who doubled as my interpreter and also as my friend.

It was Ramadan and to let him rest, I periodically got behind the wheel. We were facing countless detentions, arrests and interrogations by police, military and who knows what security forces, but we were moving forward, always forward, despite all obstacles.

From that great distance, from the heights of the mountains of Afghanistan, the courthouse in Hong Kong kept falling into proportion and meaningful perspective.

It was surrounded by an enormous city, once usurped and sodomized by the British Crown. A city where ‘unruly locals’ were being killed, tortured, flogged and regularly imprisoned.

And it was not only Hong Kong that has suffered: the entire enormous country of China with one of the oldest and greatest cultures on Earth had been brutally ransacked, including its splendid capital – Beijing – that was invaded and almost totally destroyed by the French and British troops. For a long period, China was divided, humiliated, impoverished and tormented.

But the courthouse, a little neat temple of colonialist justice, now stood in the middle of the once occupied city, whispering about the days when it offered certainty and pride to all those who came to Hong Kong as colonizers, as well as to all those who served and licked the boots of their British masters.

The courthouse was providing confidence to people who were longing for one, just as they did during the grotesque and perverse days, as well as now.

Behind its walls ruled clearly defined and meticulously obeyed spirit of fairness: if one’s chicken got slaughtered, or if one’s tricycle got smashed by a hammer of a mad shopkeeper, the legendary British justice was administered promptly and properly.

Some people would argue, of course, that the entire colonialism was unjust, that the killing of tens of millions of people in Asia, Africa, the Middle East and elsewhere was much more noteworthy than settling fairly and justly some domestic or real estate dispute. Such voices, however, have been always quickly silenced, or bought (with money, diplomas, or other means).

Certainly, the British Crown has been busy subjugating entire countries and continents, murdering innocent people, freely plundering and enslaving men, women and children. Tens of millions died in the British-triggered famines alone, on the Sub-Continent and elsewhere. But that was done “outside” the legal framework, and it was never fit to be discussed publicly in a ‘polite society’, by both the English people as well as by the émigré elites.

Now the UK has been absorbed by the ‘great’ Western Empire, governed by its offspring. Global genocides continue to murder millions. For those, no one gets punished, while the fines for speeding or not wearing seat belts are getting transparently dispersed among the servile citizens of the British Isles.

You kick your dog in public, and you could get arrested, then fined, or perhaps even thrown into jail. You shout at your girlfriend, she runs to police, and they open a ‘criminal investigation’ against you.

You shoot a few missiles at some independent country, killing dozens of innocent people, and it is business as usual. You overthrow some ‘unruly’ African government, and no court of justice, local or international, would even bother to hear the case against you, properly and seriously.

Alexander Thomson from UK Column News in the UK, commented for this essay:

British justice is fine for peer-to-peer disputes such as breakages and traffic accidents. You’ll most likely get a fair hearing. But at the macro level? The British and their offspring have pillaged entire continents. Where’s the justice there? If there’s none but “victors’ justice”, should that legal system be honoured by the nations of the world?

I often wonder whether even the British citizens themselves should honor such a charade?

The renowned Canadian international lawyer, Christopher Black, has doubts about the entire international legal system which is literally dictated by Western countries, predominantly by the US and UK. He wrote for this essay:

Instead of peaceful and mutually respectful relations between nations, adherence to the fundamental principles of the peaceful resolution of conflicts and disagreements between nations set out in the UN Charter, of the principles of the Non-Aligned Movement, the world is faced with ultimatums, bribes, threats and assault. Their brutality would be unimaginable if it was not so routine.

The question is: should the legal system, which coerces dozens of countries all over the world, be taken seriously, even respected? Isn’t it ridiculous, even debauched, to honor the US and British courts, considering that they are serving the most aggressive and morally defunct system in the world?

The most important question that arises from the discussion of how to establish a just world in which every nation has equal rights and status, in which national sovereignty is respected and the peaceful resolution of international issues as a matter of course is what type of legal mechanisms and structures need to be established in order to achieve and maintain this equilibrium.

It is a well known fact that those systems that are antagonistic to the Western dictates get routinely attacked, even destroyed. Right now several countries are under direct attack from the West: from Venezuela to Syria, to name just two victims out of dozens.

On closer examination, it is all nothing more than a ‘mafia justice’, or call it a terror.

I refuse to respect such a system, including its courts and its entire farce called ‘justice’. To me, it is all ‘illegal’ and corrupt. If confronted, I’d refuse to accept the authority of the Western legal system; I’d just laugh in the faces of its judges.

Lawyers serving such a system are, at least from my personal point of view, nothing more than collaborators or at least – spineless gold-diggers.

During the Nazi era in Germany, family or real estate disputes were resolved fairly and briskly. However, that doesn’t mean that Slavs, Roma, Jews, or non-white people should have had any respect for the German ‘justice’ of these years.

Certainly, your goat could be avenged if slaughtered illegally, but the next day, no one would save you from going up in smoke from the chimney of a concentration camp crematorium.

From the heights of totally destroyed and miserable mountain villages in Afghanistan, all this is suddenly clear and ‘obvious’.

It is also very clear when observed from Syria or Latin America, or the Democratic Republic of Congo, where, of course, almost no Westerner would bother to travel.

Attempts to establish a world order in which a dialogue of civilizations is the norm instead of conflict between civilizations are foundering on a crude return to a “might makes right” attitude against which any attempt to insist on adherence to international law and norms, even common morality, is viewed as a weakness to be exploited.

The question therefore arises as to how nations and peoples can establish the necessary legal mechanisms to survive and flourish when there exist those who oppose any such mechanisms being established and act to destroy the mechanisms that do exist. The answer is to take the power from those who want this unjust world order, this world for the criminals. We know what is to be done. But that is not good enough. We have to determine how it is to be done.

The first step is, surely, to refuse this criminal ‘justice’ system, even to mock it, and ridicule it.

To serve criminals is a crime itself. To legitimize this illegitimate system by pretending that justice could be served inside its frame is itself immoral.

A courthouse in Hong Kong is not a temple of fairness. To pretend that it is would be a cynical mockery, a ‘spit in the face’ to millions of those who lost their lives in China and all over the world, at the hands of the British and Western colonizers.

And one more comment about Western justice: if just slightly exaggerating, one could easily arrive to the conclusion that in a world ruled by brutal and unbridled imperialism, the only honorable place to dwell in is jail!

Andre Vltchek is a philosopher, novelist, filmmaker and investigative journalist. He has covered wars and conflicts in dozens of countries. Three of his latest books are the revolutionary novel Aurora and two bestselling works of political non-fiction: Exposing Lies Of The Empire and Fighting Against Western Imperialism. View his other books here. Watch his Rwanda Gambit, a documentary about Rwanda and DRCongo. He continues to work around the world and can be reached through his website and Twitter. Read other articles by Andre.