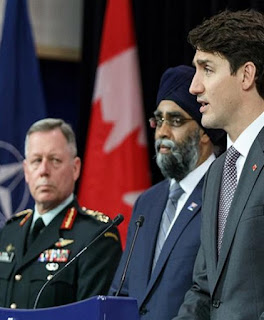 It's no wonder the Trudeau government has moved to ramp up military outlays. Even "left" commentators/ politicians are calling for increased spending on Canada's ecologically and socially destructive war machine.

Yesterday Defence Minister Harjit Sajjan announced a 70 per cent increase in military spending over the next decade.

A Globe and Mail story about the defence policy yesterday quoted David Perry, an analyst with the unabashedly militarist Canadian Global Affairs Institute, and UBC professor Michael Byers, who has been described as the "angry academic voice of Canadian foreign policy" to denote his purportedly critical stance.

In the story titled "Canada's new defence spending must come quickly, experts say," the paper reported that "Byers said the Forces are currently in a state of 'extreme crisis,' with the Royal Canadian Navy running out of functioning ships and the Royal Canadian Air Force still years away from getting its new fleet of fighter jets. 'The government has inherited a badly broken Canadian Forces and it clearly has a monumental task ahead that is only beginning,' he said."

Despite his affiliation with a peace organization, Byers supports increased military spending. The Rideau Institute board member has repeatedly expressed support for Canada's war machine.

In 2015 the UBC professor published Smart Defence: A Plan for Rebuilding Canada's Military which begins: 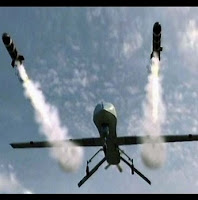 "Canada is a significant country. With the world's 11th-largest economy, second-largest landmass and longest coastline, one could expect it to have a well-equipped and capable military.

However, most of this country's major military hardware is old, degraded, unreliable and often unavailable. When the Harper government came to power in 2006, it pledged to rebuild Canada's military. But for nine long years, it has failed to deliver on most of its promises, from new armoured trucks and supply ships to fighter jets and search-and-rescue planes." 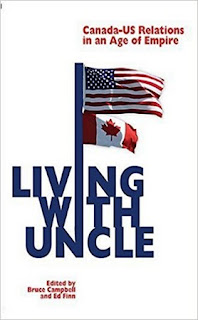 Byers has long called for increased military spending. In a chapter in Living with Uncle: Canada-U.S. relations in an age of Empire, edited by then CCPA leaders Bruce Campbell and Ed Finn, Byers notes that "the defence budget, roughly 1.2 per cent of GDP, is a bit low by comparable standards."

He describes writing a 2004 paper for NDP defence critic Bill Blakey that called for a $2-3 billion per year increase in military spending. "A defence budget increase," it noted, "essentially repairs some of the damage that was done by a decade and a half of neglect." But, the military budget was $15 billion and represented 10 per cent of federal government outlays at the time.

A former NDP candidate and adviser to Tom Mulcair, Byers' position is similar to that of the social democratic party's leadership.

After the federal budget in March the NDP leader criticized the Liberals for not spending enough on the military. "Canadians have every right to be concerned," Mulcair said.

The NDP has staunchly defended Canadian militarism in recent years. During the 2011 and 2015 federal elections the party explicitly supported the Harper government's large military budget. In 2011 party leader Jack Layton promised to "maintain the current planned levels of defence spending commitments" and the 2015 NDP platform said the party would "meet our military commitments by maintaining Department of National Defence budget allocations."

In addition to backing budget allocations, the NDP has criticized base closures and aggressively promoted the National Shipbuilding Procurement Strategy, a $60-billion effort to expand the combat fleet over three decades (over its lifespan the cost is expected to top $100 billion).

I'm yet to come across a formal party statement about yesterday's announcement. What do those currently vying for NDP leadership think of the Trudeau's new defence policy and how will they respond?