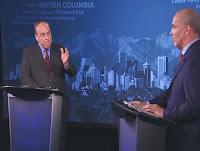 On the eve of his candidate’s kick-off event, Green Party campaign manager Troy Grant reached his breaking point with Andrew Weaver, causing him to resign. “I can’t support the BC Green Party because of Andrew Weaver,” Grant now admits.

Troy Grant is a Vancouver Island resident and environmental activist who, up until a couple of months ago, was running the campaign of Green Party candidate Lia Versavel. As part of his early groundwork on the campaign, Grant reached out to Common Sense Canadian lead columnist Rafe Mair, a man whose opinions Grant says he has always respected.

Intrigued by what he heard about Versavel, Rafe proceeded to interview her, resulting in this relatively glowing review. Rafe being Rafe, though, couldn’t sign off on the piece without one caveat: his disdain for party leader Andrew Weaver’s ongoing support of IPPs (private power projects). After all, Rafe and this publication have been highly critical of IPPs going back to the Gordon Campbell era, when Weaver stumped for the BC Liberals as a UVic climate scientist.

By the time Grant showed up to a campaign launch for Versaevel in early February, he had already been berated over the phone by high level party operatives over the Mair article. They were incensed that Grant had reached out to Mair, a longtime critic of Weaver’s. Grant had no reason to expect what happened next, though. Weaver himself showed up to the event and proceeded to “rip into” Grant. So irate was the party leader that “minutes before the event was to start, I had to ask him to step outside,” Grant recalled for me in a phone interview this morning.

Two weeks later, Grant tendered his resignation from Versaevel’s campaign. Officially, it was for health reasons. Grant suffers from a serious disability and mobility challenges which, over the course of Versaevel’s early campaigning, grew worse.

But, privately, the incident with Weaver was a big motivating factor for his departure – “the last straw”, he acknowledged.

More than Weaver’s angry treatment of Grant, his policies were also a serious concern. “I resigned because of a difference of opinion with the way the leader was leading the party,” Grant added.

Writ large, Weaver’s strategy of sidling up to Liberal voters was a problem for Grant, who explained it this way:

Weaver believes he can pick up the Green Party, plop it in the middle, make it “Liberal Light” and draw votes from both sides. It makes me angry when people minimize the urgency of our environmental challenges for political gain – and that’s what he’s done. It’s a travesty.

Construction of a private power project on the Ashlu River (Photo: Range Life)

In terms of policy specifics, Grant shares many of the concerns Rafe and this publication have highlighted about Weaver, including his support for the Campbell/Clark private power program, which has meant widespread ecological devastation for many of BC’s rivers, but also resulted in well over $60 Billion worth of sweetheart contracts for private power players – many of them significant BC Liberal Party donors – unnecessarily driving up power bills for British Columbians and all but bankrupting our public utility. The Versaevel piece was far from the first time Rafe had taken on Weaver’s pro-IPP position.

In 2009, when Rafe I were both speaking out publicly against IPPs, we were dismayed to learn that Weaver wrote an op-ed and made robo-calls (listen for yourself) in favour of the Campbell Liberal Government, with supportive words for his energy program. Following that election, Weaver remained relatively silent about IPPs until, after becoming leader of the BC Greens, he was quizzed about his position by then-CFAX Radio host Ian Jessop. After hearing Weaver’s interview, Rafe wrote:

Dr. Weaver [is] still praising private power – only criticizing the Liberals’ lack of environmental monitoring and enforcement. What he fails to recognize or admit is that this industry has never been monitored, nor any protections enforced, since day one, which is precisely what we’ve been warning for nearly a decade now. This is not some mere wrinkle or oversight – it’s exactly how a privatized system is designed to work.

Later writing about Green candidate Versaevel, Rafe included this line, which appears to have sparked the dust-up between Weaver and campaign manager Grant: “…Dr. Weaver [remains] an unrepentant supporter of IPPs without concern for the damage they do or the monetary wreckage they have visited on BC Hydro. If he is a ‘Green’, he needs a new paint job.”

But for critics of Weaver’s within the environmental community, IPPs are just one in a long list of gripes. Others include:

Grant also points Weaver’s bewildering relationship with the Liberal Party, as other critics have done of late. When Weaver distanced himself from popular federal party leader Elizabeth May over the BDS controversy, he told the media, “I’ve got a lot of federal Liberals on my team who are members of the federal Liberal party but also members of the B.C. Green Party.” If distance is what he sought, that’s apparently what he got. One would expect May to be all over the BC campaign trail, rallying her federal Green supporters in key ridings where the Greens are vying for seats on May 9. Aside from a few campaign stops early on, there’s been barely any mention of the country’s brightest Green star.

Then there’s the overt Liberal support for the Greens – which last election meant pro-Green ads paid for by the Liberal campaign. This time around, it’s more subtle. There’s Judi Tyabji – wife of Liberal LNG booster Gordon Wilson and mother of Liberal candidate Mathew Wilson – working with the Powell River Chamber of Commerce to host Andrew Weaver in the very riding her son’s campaigning in, then extolling the Green leader’s virtues on facebook.

And, of course, there’s Weaver portraying himself as ready to work with the Liberals – even ready to accept a cabinet position from them – yet dismissing John Horgan and the NDP. This particular incident drove ex-Liberal Chief of Staff Martyn Brown to come out publicly against Weaver and urge progressive voters to unite under the NDP:

It is beyond me how Weaver could ever contemplate supporting Clark’s government—a government that has eviscerated B.C.’s globally-lauded climate action plan and that is diametrically opposed to virtually every plank in the Green party’s platform.

For the life of me, I cannot fathom how the Green party leader could ever equivocate on which party he would support if he finds himself holding the balance of power, as he did in the televised leaders’ debate, and as he did again in Wednesday night’s interview on Global TV.

Which is why I will be casting my vote for the NDP — a party I spent nearly a quarter of a century fighting against.

For his part, Troy Grant is clearly still torn about his recent experience with the Green Party, noting how badly he feels about having to step away from the campaign of Versaevel, whom he holds in high regard. The same can be said for many of her fellow candidates and party supporters – but Weaver has jeopardized all that.

“All these people have done so much work over the years to build the Green Party,” he told me, “but now he’s turned it into the ‘Andrew Weaver Party’.”

Damien Gillis is a Vancouver-based documentary filmmaker with a focus on environmental and social justice issues - especially relating to water, energy, and saving Canada's wild salmon - working with many environmental organizations in BC and around the world. He is the co-founder, along with Rafe Mair, of The Common Sense Canadian, and a board member of both the BC Environmental Network and the Haig-Brown Institute.