Radio: Andy Worthington Discusses Life in Trump’s America and the Future of Guantánamo with Chris Cook on Gorilla Radio

[Please support my work! I’m currently trying to raise $2500 (£2000) to support my writing and campaigning on Guantánamo and related issues over the first two months of the Trump administration.] 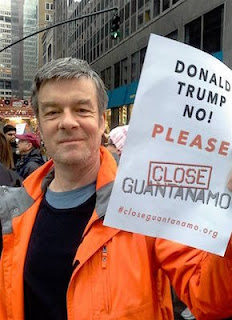 Last week, I was delighted to speak to Chris Cook of Gorilla Radio, based in British Columbia, about life in Donald Trump’s America, and the current situation regarding the prison at Guantánamo Bay.

The hour-long show is available here as an MP3, and my interview took up the first 24 minutes.

Chris and I have spoken many times before — generally at this time of the year, to reflect on the situation at Guantánamo around the time of the anniversary of its opening, on January 11.

For this year’s interview, I ran though the dying days of the Obama administration, pointing out how, despite President Obama’s promise, on his second day in office in January 2009, to close the prison, it remained open as he left office primarily because he had persistently failed to prioritize its closure throughout the previous eight years.

I acknowledge that Congress made life as difficult for him as possible, passing laws that prevented him from bringing any prisoners to the US mainland for any reason, and which also raised as many hurdles as possible to prevent the release of prisoners to other countries, but as the president, Obama could and should have engaged with Congress earlier in his presidency, and with greater urgency and indignation than he ever showed.

We also spoke about what awaits the Guantánamo prisoners under Donald Trump, and I explained how I hope that, despite the leak of a draft executive order promising to keep Guantánamo open, and to send new prisoners there, Donald Trump will have trouble justifying any effort to revive Guantánamo, primarily because federal courts have established that they are the best venue for prosecuting terrorists.

Chris also asked me for my impressions of Trump’s America, as experienced during my annual visit last month to campaign for the closure the prison on an around the anniversary of its opening, representing the Close Guantánamo campaign, and I explained how genuinely shocking it was to be there as Trump, a bully, racist, sexual predator and corrupt businessman, who is so spectacularly unqualified to be president, took over from Obama. I also mentioned how disturbing his white supremacist advisors are (like Steve Bannon, for example), and I focused in particular on his immigration ban, an outrageously racist policy that, as I noted, could only be justified if some state of national emergency existed, whereas, in reality, there is no emergency, and in fact, no terrorist acts have been committed by anyone from the seven countries Trump has banned.

Chris also asked me about Shaker Aamer, the last British resident in the prison, whose release I campaigned for over many years, and particularly in the last year of his imprisonment via the We Stand With Shaker campaign that I co-founded in November 2014 with the activist Joanne MacInnes. Shaker was finally released in October 2015, and to explain his story I ran through a brief history of how prisoners were rounded up for bounty payments, and tortured to provide information about themselves and their fellow prisoners, because the US authorities knew nothing about them, having shamefully discarded the Geneva Conventions, which have safeguards designed to prevent the inappropriate imprisonment of civilians, and because the Bush administration took the position that, if prisoners failed to provide useful information, it was not because they know nothing (as was most likely), but because they had been trained by al-Qaeda to resist interrogation.

As an outspoken and eloquent man, who insisted that the authorities should treat the prisoners according to international and domestic laws and treaties, Shaker Aamer came to be regarded as a significant figure in al-Qaeda, when in reality his leadership was because of his courage and his indignation, and his unquenchable thirst for justice, something that has become apparent to me on those occasions I have met him since his release.

It was great to talk to Chris again, and I hope you have time to listen to the show — which included journalist Peter Lee talking about Obama, Trump and China after my interview — and to share it if you find it useful.

Andy Worthington is a freelance investigative journalist, activist, author, photographer, film-maker and singer-songwriter (the lead singer and main songwriter for the London-based band The Four Fathers, whose debut album ‘Love and War’ and EP ‘Fighting Injustice’ are available here to download or on CD via Bandcamp).

He is the co-founder of the Close Guantánamo campaign (and the Countdown to Close Guantánamo initiative, launched in January 2016), the co-director of We Stand With Shaker, which called for the release from Guantánamo of Shaker Aamer, the last British resident in the prison (finally freed on October 30, 2015), and the author of The Guantánamo Files: The Stories of the 774 Detainees in America’s Illegal Prison (published by Pluto Press, distributed by the University of Chicago Press in the US, and available from Amazon, including a Kindle edition — click on the following for the US and the UK) and of two other books: Stonehenge: Celebration and Subversion and The Battle of the Beanfield. He is also the co-director (with Polly Nash) of the documentary film, “Outside the Law: Stories from Guantánamo” (available on DVD here — or here for the US).

Please also consider joining the Close Guantánamo campaign, and, if you appreciate Andy’s work, feel free to make a donation.