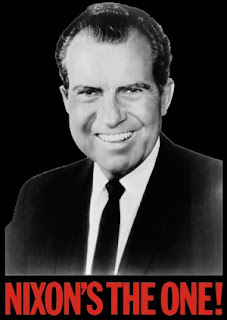 Nixon’s final defeat, now underway, can only be understood in the context of a future that is currently manifest, as prognosticated by our greatest writers.

Today’s circumstances are just as overpowering as “The World State” of Aldous Huxley’s The Brave New World (1932) with its hypnopaedic education of children and discouragement of critical thinking whilst the people bathed in an abundance of material goodies.

As it goes, the future as it currently happens is immensely, greatly in harmony with Huxley’s boldest dreams with so little pushback or objection that Richard Nixon must be turning over in his grave. But, why Nixon and why final defeat?

A quickie comparison of Orwell to Huxley explains the compelling relevance of Huxley to today:

Nixon was the last president (1968-74) who truly and overwhelmingly embraced the welfare of American citizens in harmony with their environment, a staunch stand on behalf of the people against rampant eco destruction. He saw it happening; he acted.

“A liberal is a man who wants to build bridges over the chasms that separate humanity from a better life,” said Richard Nixon, and according to Noam Chomsky: “Richard Nixon was our last liberal president,” (Source: If Nixon Were Alive Today, He Would Be Far Too Liberal to Get Even the Democratic Nomination, AlterNet, July 29, 2011).

Jumping ahead in time to today, based upon statements by and including personalities in the upcoming Trump administration, Nixon’s domestic policy legacy is targeted for final defeat after 40+ years of protecting the welfare of the people and with deep respect for the ecosystem. This will likely be Nixon’s final defeat.

By now, it is blatantly obvious to any and all, except for cave dwellers, the Trump administration is dead set on final defeat of Nixon’s legacy. “Forty Years Smoked in Four” may very well be the legacy of tomorrow, as an already cascading biosphere, from mountaintops to ocean depths, loses a good friend and strong dedicated ally in President Richard Nixon. No president since has set in place so much good for so many. Yet, he died in infamy after resigning in the face of almost certain impeachment (Watergate) on August 9, 1974.

Remarkably, and easily overlooked by many, Nixon was “the last liberal president,” as stated by Noam Chomsky, who himself is the incarnation of American liberalism. Whether Nixon’s final defeat signals the death of liberalism as a means to progress is now horribly festered with risks like never before in modern history.

The bedrock of Nixon’s environmental legacy, the EPA, will be led by E. Scott Pruitt one of the country’s fiercest critics of the agency with a long history of suing the EPA to prevent rules safeguarding air and water pollution from taking effect. His own website labels him as “a leading advocate against the EPA’s activist agenda.”

Pruitt has sued the EPA time and again to block well-established rules over the years, like the rule restricting how much mercury coal plants can emit. He now has his sights set on overturning Obama’s Clean Power Plan meant to reduce GHG emissions to adhere to the Paris Climate Agreement of 2015, the coming together of 195 nations.

Overall, Trump’s pit bulls will likely reshape askew Nixon’s achievements meant for the genuine betterment of society so much so that revival of Sixties in the Streets is almost guaranteed. Regrettably, the streets of America have seldom been so perilously filled with stench of abject fatality.