While decrying “massacre” in Aleppo, US steps up bloodshed in Mosul 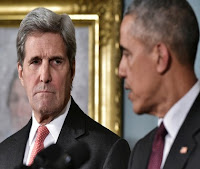 Even as columns of green buses were ferrying the last of the Western-backed Islamist “rebels” out of eastern Aleppo Thursday, Secretary of State John Kerry took the podium at a State Department press conference to describe the situation in the northern Syrian city as “unconscionable” and to denounce the Syrian government of President Bashar al-Assad for carrying out “nothing short of a massacre.”

Kerry’s denunciations, which extended to Syria’s allies, Russia and Iran, expressed the growing anger and desperation within US ruling circles and Washington’s military and intelligence apparatus over the debacle of the five-year-old regime change operation in Syria.

Secretary of State Kerry (left) vows,
“The fall of Aleppo, should it happen,
does not end the war. It will continue.”

With the driving out of Aleppo of the Al Qaeda-linked militias that have been armed and funded by the CIA, the so-called “rebels” have lost their last foothold in a major urban area, and the prospects of these proxy forces toppling Assad have largely evaporated.

Kerry was reduced to demanding a “cessation of hostilities” in Aleppo under conditions in which a cease-fire brokered between Russia and Turkey—with no apparent prior notification of, much less participation by, Washington—appeared to be holding on Thursday as the orderly evacuation of both “rebels” and civilians proceeded.

Kerry vowed, “The fall of Aleppo, should it happen, does not end the war. It will continue.” The statement amounted to a threat, under conditions in which the Obama administration recently issued a waiver of the US Arms Export Control Act to allow the CIA to funnel in more weapons to “irregular forces” in Syria. Even with these arms, however, it is difficult to see how the “rebels” can regain the offensive.

The hypocrisy of the US denunciations of the brutal methods employed by the Syrian government and its allies in eastern Aleppo has been underscored by the unfolding of a similarly savage siege being directed by the Pentagon against the far larger urban population of Mosul, Iraq’s second-largest city. As many as 1.5 million people still live in that metropolitan area, which the Iraqi army surrendered to the Islamic State of Iraq and Syria (ISIS) in June 2014.

With the US-backed offensive against Mosul now nearly two months old, conditions for the city’s residents are growing increasingly desperate, while the number of civilians killed continues to mount.

Scattered reports from media in the region provide a glimpse of the carnage unfolding in Mosul. Turkey’s Anadolu news agency reported that an entire family of nine was wiped out on Tuesday in a US drone missile strike against a house in Mosul’s al-Falah district. “Nine family members were killed in the attack,” an Iraqi police officer told the agency.

“At least 40 civilians have been killed including women and children and dozens of others injured in air raids and artillery fire in the east of the Islamic State group [IS] bastion of Mosul, local and medical sources have said. The civilians were killed early on Wednesday with many of the injured still trapped under rubble...”

While similar accounts of human suffering in Aleppo have received non-stop coverage in the Western media amid official denunciations of Syria and Russia, reports of the slaughter in Mosul have been effectively blacked out.

Instead, what reports there are concentrate on the terrorization of the local population by ISIS, which is described as preventing civilians from leaving besieged districts so as to use them as “human shields,” employing identically brutal tactics as those used by the Western-backed “rebels” against the civilian population in Aleppo, whose plight was blamed entirely upon the Syrian government.

Appearing at a joint news conference with US Defense Secretary Ashton Carter at the Qayara air base earlier this week, Lt. Gen. Stephen Townsend, the top US commander in Iraq, estimated that the US-backed forces had “killed or badly wounded over 2,000” ISIS fighters since the launching of the offensive on October 17.

No such estimates have been offered as to the number of civilians who have been killed, but given the tactics that are being employed, using special forces units to call in airstrikes and artillery and tank fire against houses in urban neighborhoods believed to be occupied by ISIS fighters, it is inevitable that more civilians are dying than combatants.

The UN’s Office for the Coordination of Humanitarian Affairs reported that in the week ending on December 11 alone, 685 civilians were wounded by the fighting. This figure is only a fraction of the real toll, given that victims inside areas still under ISIS control are not recorded by the agency.

Doctors and nurses in the city are working under impossible conditions, without access to medicine, clean bandages and even water and electricity, which have been cut off to most of the city as a result of airstrikes.

The government has reported that 100,000 people have been displaced by the siege, including at least 35,000 children. Preparations are reportedly being made for 500,000 civilians to be ultimately driven out of the city.

With winter weather having set in, temperatures are falling below freezing under conditions in which the population is left without the ability to heat or light their homes, and those who have fled are living in tents. Food supplies, meanwhile, are running low, with prices soaring. In the end, the assault on Mosul may claim more victims through exposure, starvation and disease than by means of bombs and bullets.

Despite the barbaric conditions that have been inflicted by this siege, which is backed by US and allied airpower as well as an army of 10,000 US and NATO troops and military contractors, no one in the West is talking about “war crimes,” much less advocating a ceasefire in Mosul, as they are in Aleppo.

In their brutal siege against the Iraqi city, the US and allied imperialists are asserting their interests and hegemony, while in Aleppo, they confront a stunning setback in their attempt to pursue the same interests by other means, using CIA-armed and Al Qaeda-affiliated proxy forces. That is what determines the stark contrast in the media’s reaction to these two human catastrophes unfolding barely 300 miles apart.

Meanwhile, the London-based monitoring group Airwars estimates the minimum number of civilians killed by US-led airstrikes since Washington launched its intervention in Iraq and Syria in the summer of 2014 at 2,013, with the real number thought to be considerably higher. Thus far, the Pentagon has acknowledged killing only 173 civilians in the campaign, which has involved over 16,500 airstrikes.