Justin Trudeau: BC is not yours to give away 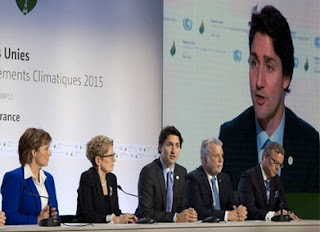 I’ll not waste too many words on Prime Minister Trudeau’s treachery. Of all the many political sins, surely the greatest of all is hypocrisy and this prime minister has taken that sin to new levels.

He basked in the glory of Paris and being portrayed as the hero of the earth but had scarcely got home when he cast aside the cloak of righteousness, reverting to being a cheap hustler for the fossil fuel industry, even outshining Stephen Harper.

May takes a stand

The consequences that would flow from Kinder Morgan’s pipeline would be a monumental contribution to global warming and killing the earth’s atmosphere but he’s consoled by the fact that the fossil fuel industry loves him and with their captive pseudo-journalists are falling all over themselves in support. I can’t help but comment on Gary Mason in the Globe and Mail, who criticizes Elizabeth May because she’s said she’ll go to jail if necessary in protest of the Kinder Morgan line. Mason, the sneer undisguised, quips, “Green Party Leader Elizabeth May has already said she is willing to go to jail over Kinder Morgan. Less clear is what good she thinks she can do behind bars.”

Gary Mason knows the answer to that full well and fears it because it would do one hell of a lot of good. There’s not a public figure in BC who could rally people against Kinder Morgan in a more effective way then she. Elizabeth May behind bars would be Kinder Morgan’s all-time, number one nightmare – not to mention a political horror story for the Liberals and the Tories. She has that commodity the media has abandoned – credibility.

From Brexit to Trump

Ms. May, along with other leaders of this fight like Grand Chief Stewart Philip, head of the Union of BC Indian Chiefs, understands something that Trudeau chooses to ignore: There’s been a sea change in politics in this world. The enemy is no longer the other political parties but the elite, regardless of individual political persuasion. Brewing for a decade, it recently manifested itself in the Brexit vote and the election of Donald Trump. No one needs to explain this to Ms. May or Grand Chief Philip and I’ve neither the time nor the inclination to explain it to Trudeau.

Not long ago I said this about the Brexit result and in predicting Trump’s victory:
The media and pollsters have been caught out making outdated assumptions and asking irrelevant questions. They’re looking at this contest through the prism of elections past and are still declaring their choice of issues and missing the main one.

The accepted media wisdom, an oxymoron if there ever was one, is that mostly kooks voted for Trump. In fact, interview after interview discloses the underlying reason was deep anger with what the Anglican Book of Prayer so neatly calls “those set in authority over us”.

The phenomenon is not Donald Trump but a worldwide movement of ordinary people who are angry. Whoever looked less elite was going to win.

Tired of being lied to

Who are these angry people?

Not the poor and disadvantaged, although they are part of it; not the traditional left, many of whom are unwelcome. These are people pissed off at the entrenched wealthy, the elite, who have the power to do as they wish. Mr. Trudeau, your ilk, sir!

What was the cause? The catalyst?

Clearly, it was pollution, a phenomenon that showed the elite to be incompetent, serial liars who, since the start of the industrial revolution, had assured the public that no harm came from gunk emitted from smokestacks even though cities like London were blackened by these emissions.

The denouement began with Rachel Carson’s 1962 Silent Spring. It was just a matter of time before people realized they had been, and were being lied to. For the first time, the need to regulate industry in order to protect the environment became widely accepted, and modern environmentalism was born.

Industry and politicians went into denial. Tobacco smoke, hitherto claimed harmless, was proved to kill both smokers and innocent bystanders, yet the companies fought every inch of the way like cornered rats. The chemical companies went into full denial, even though companies like Union Carbide became massive killers.

The list seemed endless and the evidence piled, up but the elite kept on lying and hiring pliable scientists and clever PR specialists. Governments were willing accomplices and, every day, the elite lost credibility, yet clung to their denial.

Then, in a different but related area of public health, there was that kook Ralph Nader, denying the wonders of America’s icon, the automobile and its ever-increasing safety features, in his 1965 book Unsafe At Any Speed. Suddenly, the courts demonstrated that Nader had been right all along. Jesus! Was there nothing sacred?

Prime Minister, we’ve come to the crux of the matter.

It has dawned on people that the elite have only one standard of judging value – money – and that they would risk destroying the earth to make it.

More and more, people see that there’s real, tangible value to water, more than just making electricity and slaking our thirst. What, they asked, if it does no more than be beautiful in its untouched state? Can it be said that water is only valuable when destroyed for a dam?

Trees have a dollar value when they become lumber and paper. What about the life they harbour and perpetuate? Is an uncut forest not valuable in itself? Do we have to destroy it before it’s an asset?

Environmentalism went from being semi-admirable Kookism practiced by, you know, those sorts of people, to the respectable, then became mainstream, moving into the realm of the sacred.

No one believes developers or governments any more, not even Prime Ministers. Projects that once would scarcely cause a ripple of adverse reaction became hugely controversial and it was no longer just the “usual suspects” picketing and demonstrating against those in authority. Suddenly “Jack was as good as his master”, perhaps better. The elite, the “higher purpose persons”, have their knickers in a knot, unable to comprehend what’s going on or why. Lying, bribery and blatant hypocrisy constitute the only catechism they understand.

You are in denial, sir, because you can’t think of anything except business as usual, always hoping this all goes away.

You tell us, Mr. Trudeau, that our environment and way of life is subject to what you say is in “the national interest” – whether we like it or not. Money counts, especially oil money. Your political commitments, not to say bribes, are paramount.

We must accept that pipelines carrying deadly bitumen go through virgin forest where spills can’t be reached or, more likely, there’s nothing to be done anyway. You glibly dismiss the horrible, ongoing risks of tanker traffic – plain statistics tell us what will happen.

Why, Prime Minister? Please spell out this national interest. Don’t you really mean the interests of the Liberal party in Alberta? The political survival of premier Notley? Don’t you mean really the masses of investment capital which hasn’t a soupçon of social conscience?

I would never hold this against them Mr. Trudeau but I remember so well going to first ministers conferences on the patriation of the constitution and watching Alberta oppose equalization for poor provinces, lecturing them that if they only managed their affairs as Alberta did, they would be fine. That these provinces had no resources and Alberta was sitting on all that oil didn’t seem to count. It seems as if shoes have changed feet in this country.

Let me ask you a niggling question: Are Property and Civil Rights not a provincial right under our Constitution?

Attitudes have changed, Mr. Trudeau, and people all over the world now believe that those things that you cheerfully donate to your corporate friends don’t belong to you or the government but to all of the people.

Yes, you have the legal right to give them all away but that’s because our political system is a couple of centuries out of date and reposes in your office dictatorial powers while you pretend to run a democracy. You know, as does anyone who thinks about it, that MPs, particularly in the governing party, have absolutely no power and are just expensive cyphers whose main job is to make sure that pension checks are mailed on time.

Let me put it perhaps more bluntly, Mr. Trudeau: We in British Columbia – and especially First Nations whose unceded territories are at stake – regard those mountains as ours, the rivers are ours, trees are ours; so are the oceans, the beaches, the coastlines, the lakes and on it goes. Your right to steal them from us and give them to oil companies only rests upon a political system that, frankly, stinks.

BC doesn’t belong to you

If that was just the position of one ageing pol living in Lions Bay, British Columbia, you would be able to rest easy. What I’m trying to make you understand, sir, is that the ever-increasing masses of people all over the world are fed to the teeth with a phoney political system that takes away from people what is theirs and gives it to greedy supporters of politicians in power.

In short, British Columbians regard all of our forests, rivers, coastlines, as having enormous value to us simply as they are – not in their exploitation but their existence. This is where we live. our home, our legacy.

Why can’t you understand that, Prime Minister?

You, the hero of the Paris conference, ask us to sacrifice our home so that the Tar Sands, the world’s biggest polluter, can spew its poisons full time again? Why are you telling us, Mr. Trudeau, that we must pledge what God gave us to the tender mercies of the fossil fuel industry?

If that’s what you truly want, you shall have it.