Hercules and the Goose: The Pernicious Progressive Appeals to National “Values” 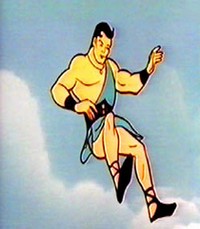 This article has been making the rounds in UK political circles. It’s a piece from Politics.co.uk by Chaminda Jayanetti: “Britain will betray itself for Trump’s coins of silver. British values are being forgotten in the hunt for trade deals.”

Which "values," precisely, will be "betrayed" when UK elites cozy up to Trump? When can we do away with these childish categories at last – "British values," "American values," etc.?

In every case, “American values” or “British values” are those values that WE value; any manifestation of other values are dismissed as “un-British” or “un-American” — even if those other values are pervasive and ascendant in our societies for decades at a time.

Are some things wrong, or not? Is Trump-style corruption, moral and ethical, wrong, or not? Is toadying up to such degradation wrong, or not? Is aggressive war, as in Iraq, wrong or not? If something is wrong, in itself, what does it matter if it “betrays” someone’s selective idea of what a nation’s “values” might be?

I understand the use of such language as a propaganda tool. I used it myself back in the Bush years — “Aggressive war violates American values; true patriots would oppose this outrage” — as a way to get “ordinary people” to listen to anti-war arguments they might otherwise dismiss. But I’ve come to see over the years that such approaches are useless.

These appeals to “patriotism” and “British or American values” are meaningless, because everyone defines these values for themselves. They also bolster the whole idea of “exceptionalism” and moral exclusiveness inherent in the concept of patriotism: “Don’t support the Iraq war (or X or Y); that’s not our values, we’re better than that, we have an inherent goodness that is being ‘betrayed’ by this action.” Thus we whitewash a multitude of other sins committed by our governments — or embedded in our society. “Oh, it’s only this that ‘betrays’ our inherent goodness, is it?”

In response, a good liberal will say, “oh no, we have many other problems — racism, sexism, oppression, economic injustice, supporting tyrants, etc. But deep down we are a good people, with inherent national values that our leaders are betraying by doing X or Y.” But even more important is the indisputable fact that in the realm of politics and power, ideas of what constitutes a nation’s “values” can change — reversing polarity almost immediately — once “our” party gets into power.

The Obama years provide a stark and painful example of this. Drones, renditions, assassinations (state murder), covert ops, subversion of other nations, supporting coups, mass surveillance, mass deportations, coddling Big Business, off-shore oil drilling, support for Israeli assaults on Gaza, militarizing the police, etc. — so many actions that so many good liberals considered immoral, un-American outrages when Bush was doing them — suddenly became entirely defensible, even noble, when Obama did them. And guess what? Those same liberals will suddenly find these things outrageous once again after January 20, when Trump starts doing them.

You can take other tacks, of course: you can try to convince people that this or that action is wrong or evil or counterproductive on all kinds of grounds. You can appeal to universal, higher-order concepts (morality, decency, etc.) or to realpolitik concerns (this policy is politically unsustainable or will cost more than it's worth, etc.) or even naked self-interest (“if we keep doing X, you’ll end up out of a job/getting killed/poorer/less free,” etc). But the appeal to a nation’s “values” is pointless and even pernicious, I’ve come to think.

We create our values by our actions — by what we do, what we countenance, what we resist or protest against. And at any given time, millions of people in a nation will be creating and manifesting a myriad of values — many of them conflicting, some of them overlapping, some of them contradicting, going back and forth in an endless, mixing flow. This is true of us as individuals — and even more true when considering the vast collections of individuals we call nations.

So what is the basis of these “British values” Jayanetti talks of? He writes:

“Like the pathetic servile courtiers of a naked king, we prostrate ourselves in the hope of a decimal point of GDP's worth of patronage while ignoring the monstrosities that lie in full sight.”

When have UK elites not ignored “monstrosities that lie in full sight” in pursuit of profit and power for themselves? Has he not heard of the slave trade? The whole history of British imperialism? (He could read Late Victorian Holocausts by Mike Davis if he'd like more information on this score.) The Iraq War? The US-UK Iraq sanctions that even the US admits killed at least 500,000 children? One reads such articles and thinks: What are you talking about? What sandbox are you playing in? (And yes, I'm speaking to my younger self as well.) Who in hell are the “former prime ministers” who must be “spinning in their graves” at the idea of Britain cozying up to Trump for a trade deal? The same ones who, throughout Britain’s history, have “ignored monstrosities that lie in full sight” in order to fill the elite’s coffers?

And one wonders, in despair: how on god’s earth can we ever hope to move this world to a better place, to at least loosen if not completely remove the elite’s death grip on power, with such childish notions and historical amnesia? How does it help to make these specious appeals to mythological national “values”? It’s like fighting Hercules with a goose feather.