Nations states are adamant and fastidious about keeping their internal workings under wraps. But it is a one-way street, as many nation states seek to gather and store any and all information about the citizenry without seeking court approval or the approval of the citizenry in question.

Web-savvy WikiLeaks objects to this double standard, and it welcomes, vets, and publishes troves of secret information premised on the principle of the public’s right to be informed about what their government is up to.

Evidence makes it is clear that the violent American establishment engages in browbeating, inciting so-called color revolutions to destabilize and overthrow disobedient governments, military encirclement, and saber rattling. This self-described indispensable nation which preens its might before major nation states such as China and Russia was not about to have its full-spectrum dominance challenged by punk computer hackers.

Leaning on its allies, the US enacted a financing squeeze on WikiLeaks. Many nation states have been severely crippled and devastated by US sanctions, but tiny WikiLeaks proved more resilient and cleverer than the Washington schemers.

In an attempt to topple WikiLeaks, the US establishment has sought to lop off the head of WikiLeaks. It has kept close tabs on Julian Assange and is purportedly behind a scheme to bring Assange down in Sweden: “We have been warned that the Pentagon, for example, is thinking of deploying dirty tricks to ruin us.”

In Sweden consensual sex has been parlayed as rape. In self-defense Assange spoke to the facts of the situation: 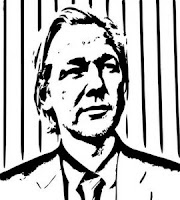 Here we have a case, the Swedish case, where I have never been charged with a crime, where I have already been cleared [by the Stockholm prosecutor] and found to be innocent, where the woman herself said that the police made it up, where the United Nations formally said the whole thing is illegal, where the State of Ecuador also investigated and found that I should be given asylum. Those are the facts, but what is the rhetoric?

… the UN formally found that the whole thing is illegal, never even mentioning that Ecuador made a formal assessment through its formal processes and found that yes, I am subject to persecution by the United States.

Disinformation and distraction are among the underhanded tactics of empire

While in Britain, Assange was eventually placed under house arrest. Sweden played out the drama while refusing to press charges or interview Assange in Britain on the allegations. It insisted he come to Sweden, which Assange was unwilling to do without an assurance that he would not be deported elsewhere, knowing full well that the US Department of Justice was preparing a case against him. Sweden refused to give such an assurance, which speaks strongly about Sweden’s intent to seek justice for any alleged crimes committed against its citizens.

Despite all this intrigue, WikiLeaks has continued to publish and Assange has continued to give interviews. Assange did not cower, instead he chose to fight back against Hillary Clinton and the Democrats. This is because Hillary Clinton and the Democrats are the principals in power and the grand jury investigation into himself and WikiLeaks has been occurring during their time in government.

Clinton and the Democrats are victims of their own zeal and hubris. Along the way many outs presented themselves to the Democrats. They could have dropped the grand jury investigation. They could have provided an assurance that there would be no request for Assange’s deportation from Sweden. The US could even have given a presidential pardon to Assange. Extremely telling about the caliber of man that Assange is is that he offered himself as a prisoner in exchange for the release of another political prisoner, Chelsea Manning.

But empire and its minions were dismissive as is the way of empire. Empire does not negotiate deals. It takes what it wants because it believes it can.

Clinton’s emails were leaked as were those of her campaign chair John Podesta. Revelations include “pay-for-play, as they call it, giving access in exchange for money to states, individuals and corporations,” a ” direct connection between Hillary Clinton and the foundation of jihadism, of ISIL, in the Middle East,” “Libya, more than anyone else’s war, was Hillary Clinton’s war,” and banks buying cabinet positions.

The Clinton campaign has, predictably, been thrown into disarray.

The Clintonites could not refute what was in their own emails. Instead they sought to deflect attention elsewhere. The Clintonites blamed Russian hacking for interfering in the US presidential race. Finally, Julian Assange felt compelled to state:

The Clinton camp has been able to project that kind of neo-McCarthy hysteria: that Russia is responsible for everything. Hilary Clinton stated multiple times, falsely, that seventeen U.S. intelligence agencies had assessed that Russia was the source of our publications. That is false; we can say that the Russian government is not the source.

Neither is WikiLeaks complicit with Russia:

We have published about 800,000 documents of various kinds that relate to Russia. Most of those are critical; and a great many books have come out of our publications about Russia, most of which are critical. Our [Russia]documents have gone on to be used in quite a number of court cases: refugee cases of people fleeing some kind of claimed political persecution in Russia, which they use our documents to back up.

Graciously toward Clinton, Assange said he feels sorry for the woman who wanted to “drone” him. Imagine what the response would have been if Assange had discussed the possibility of a drone attack against Clinton.

Presently, Assange downplays the damage from the barrage of leaks to the Clinton campaign for the presidency.

Trump would not be permitted to win. Why do I say that? Because he’s had every establishment off side; Trump doesn’t have one establishment, maybe with the exception of the Evangelicals, if you can call them an establishment, but banks, intelligence [agencies], arms companies… big foreign money … are all united behind Hillary Clinton, and the media as well, media owners and even journalists themselves.

However, a counter coup was announced against the coup by “Clinton cronyism.” It is said to include FBI, CIA, military intelligence, other security organizations “through Julian Assange” that have promised to stop Clinton from becoming president and to convict and indict her and her cronies.

No matter what transpires on November 8, the reverberations from this confrontation should be monumental. US democracy has — again — been revealed to be glaringly corrupt. Most importantly, the world’s preeminent military-industrial complex has been shown to be susceptible to the power of one person. Properly framed, it is the power of one person to work with other persons to form a greater consciousness, a consciousness that ultimately will transcend and defeat the corruption of empire.

Kim Petersen is a former co-editor of Dissident Voice. He can be reached at: This email address is being protected from spambots. You need JavaScript enabled to view it.. Twitter: @kimpetersen. Read other articles by Kim.