The Wreck of the Nathan E Stewart 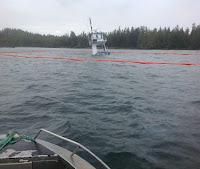 Pacific Pilotage Authourity CEO, Captain Kevin Obermeyer, -who is the "buck-stops-here" senior person responsible for all shipping on the west coast of Canada, -and who answers only to the Federal Transport Minister, Marc Garneau tells me he is "sickened" by yesterdays disaster, and would have "bet a years salary" that this could never have happened.

(I should have shook hands on that bet a few years ago...)

What remains of the Nathan E Stewart
in Seaforth Channel

Hello all, as is clear from the highly sanitized CBC coverage of the wreckage of the Texas- based tanker near here, the interview I did with them yesterday is being censored from broadcast.

Regrettably, our national, tax-payer-funded broadcaster continues to be controlled by Big Oil, and is being managed by the skeleton crew of corporate-lackey stenographers who survived the voracious cuts orchestrated by the HarperKon regime. I anticipated that my comments would be restricted, so therefore I recorded an unedited copy of my CBC interview. You can watch it here:

The wreck of the Nathan E Stewart: CBC interview
from Ingmar Lee on Vimeo.

This morning I implored Captain Obermeyer to use his considerable opportunity, -as a person with significant powers- to do something useful for the planet , -something his grandchildren might remember him for, and shut down this nonsense about using the BC Inside Passage as a conduit for the massive domestic Alaska fuel traffic. I reminded him that there is a reasonable solution, -that instead of doing 50 10,000 dwt transits of this coast annually, the Alaska fuel delivery business needs to acquire a proper, offshore-capable tanker, -and travel 20 miles offshore, -JUST LIKE ALL THE OTHER TANKERS MUST DO.

In response to this, Obermeyer muttered something about the "Oregon Treaty" -an archaic colonial document imposed in 1846 - which he says designates the BC Inside Passage as "an open water international waterway." He tried to conflate the massive American traffic with the comparatively tiny local domestic fuel traffic which delivers fuels to our coastal communities, saying an Inside Passage tanker ban would mean shutting that down as well. I do not buy this argument at all. Yes, there are risks, and we need to be vigilant about our own domestic fuel deliveries by sea, but we do not need to complicate this by accepting the American traffic at all.

So what is Captain Obermeyer's solution? Well, he says he has " removed the special waivers" which exempted this company from operating without Canadian pilots. Huh? Just last year he was arguing with me that the American sailors who were receiving his exemptions "were just as skilled and experienced as our Canadian pilots." He was, apparently so confident in their seamanship that he was prepared to wager his salary!

Tragically, the MarineTraffic route tracker which delineated the cour se of the Nathan E Stewart and its barge shortly after midnight yesterday, shows the vessel making the turn around Salal Island near the Ivory Point Lighthouse, and then heading in a straight line at more than 7 knots, directly into the rocks at the entrance to Gale Passage. So much for human infallibility...

Frankly, I am exhausted, heartbroken and disgusted, to have to continue repeating, shouting all this continuously, all in my spare time, while being perpetually ignored and unassisted by any, ANY professional BC ENGO. I've literally fallen down on my knees and begged for help, -it is such a vast subject, and an enormous problem, it is, in fact, the single biggest possible threat to the so-called Great Bear Rainforest that all these ENGO's are falling all over themselves with pride to have "protected." NONE of them have got the slightest comprehension of the problem.

I can tell you all right now, that as we speak, Kirby Corporation and ilk are already loading the very next 10,000 deadweight ton Tanker, and are about to start the voyage north. They will fill their Tanker, either at the Kinder Morgan Westridge terminal, or at the Tesoro Anacortes terminal, and will then begin their traverse of the Salish Sea, passing through beautiful Sabine Channel between Texada and Lasqueti Islands, and on past Campbell River, right through the dangerous ship-eating tidal maelstrom of Seymour Narrows, on up through Johnstone Straits right past the Orca rubbing beaches at Robson Bight, through Blackfish Sound, and on by the open-ocean stretch past Cape Caution, Fitzhugh Channel, and on past Bella Bella, -and steaming directly through the ongoing slick being still being puked out of their sunken fellow ship- continuing past Klemtu, Hartley Bay and passing right overtop of the sunken BC Ferry "Queen of the North" and "Brigadier General Zalinski," both of which continue to belch up gaseous petroleum product, up Grenville Channel, past Prince Rupert and on to Alaska. They will pay no Canadian fee, they will employ no Canadian, they will have no Canadian pilot, and there will be no stops in Canada.

We must STOP them on their next shipment. Lets go out and do it NOW.

It was amazing to me to suddenly hear the Canadian Coast Guard come on the radio this afternoon to announce that incident command was now in the hands of some Seattle salvage outfit that had been hired by Texas-based Kirby Corp. After that, CCG relayed all the private phone numbers to the tugs that were standing by and told them to call the salvager for instructions. Sure, it was a big problem for the CCG on-scene commander, - the Captain of the CCG vessel Bartlett. If he gave the tugs the go-ahead to pull, they might have caused enough damage to sink the stricken vessels. But by leaving them there, they were subject to being bashed by the seas, and growing storm and falling tide, which also might have resulted in sinking. And if they did successfully yard them off, then what? The tug was already all but sunk ( and there are reports now that it has tore off the barge and totally sunk now) Then what to do with the barge which may also be holed and puking pollution into the sea? Are they now towing that to Shearwater Corp? Or somewhere, spewing pollution all along its way?! I don't know, but it just does not sit right having some American salvage business, and the corporation responsible for the disaster being in charge of the situation...

Well the Kinder Morgan-owned " Western Canada Marine Response Corporation, aka WCMRC aka BurrardClean (Kinder Morgan 50%, the rest of the shares by Chevron, Imperial Oil, Suncor and Shell) has finally arrived on the scene of the wreckage about 18 hours after the tug/barge mated unit (they ride doggy-style) first went aground early this morning. WCMRC is much touted by the pro-tanker lobbyists such as Krusty Klaque and ilk as being " Canada's "World Class" marine response service. Reports say that the Nathan E Stewart has now separated from the barge and has sunk to the bottom of Seaforth Channel, from where it will never be resurrected. I'm sure we will now be hearing dutiful corporate media reports about how the wonderful WCMRC, - which has a monopoly mandate to control oil spill response for the ENTIRE BC coast- has cleaned everything up and environmental damage is minimal " because diesel simply evaporates into the environment." (We will be sure to hear BC Green Party leader, and BC Liberal imposter, Andrew Weaver parroting that lie.) We don't know the fate of the barge "DBL 55" yet, although the Canadian tug, "Haisea Guardian" which had a cable attached to the barge earlier in the day, can now be seen on AIS moving slowly away from the scene...