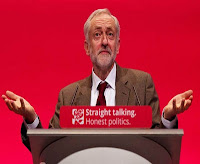 Labour leader Jeremy Corbyn could do with better advisers. Yesterday, in a press conference Corbyn announced, "our Jewish friends are no more responsible for the actions of Israel or the Netanyahu Government than our Muslim friends are for those of various self-styled Islamic states or organisations." This ‘equivalence’ of the Jews and the Muslims is weak.

Despite Israel’s devastating record of war atrocities, the vast majority of the world’s Jews support the Jewish state and identify with Zionism. The Jewish lobby dominates American, British and French foreign affairs. This lobby pushes for criminal immoral interventionist wars. Corbyn obviously knows this since he has consistently voted against these wars.

None of these factors apply to Muslims or Islam.

Only a fraction of Muslims worldwide support the Islamic state. In fact, the vast majority of Islamic leaders denounce Isis politically, religiously and culturally. There are no Islamic lobbies operating in our midst and pushing for wars. Finally, unlike Jewish oligarchs such as Haim Saban and George Soros, Muslim billionaires do not attempt to buy our political system. So I can’t imagine what led Corbyn to make such a comparison.

And who are these ‘Jewish friends’ to whom Corbyn referred?

Is the pro- Israel Chief Rabbi Ephraim Mrivis, who was quick to denounce Corbyn, one of Corbyn’s Jewish friends? Probably not.

Is the former Chief Rabbi Lord Jonathan Sacks, who added his voice to the complaint that Corbyn’s comparison was "demonisation of the highest order, an outrage and unacceptable." Is he one of Corbyn’s Jewish friends?

Are the Labour Friend Of Israel, who have utilised every trick in the Book of Esther to destroy Corbyn, Corbyn’s Jewish friends?

Maybe Corbyn reckons that the Jews who pushed for the suspension of the heroic Ken Livingstone and many other Labour politicians and members, maybe they are his Jewish friends. Who knows?

Corbyn probably thinks that ‘Jews for Corbyn’ are his true Jewish friends. However, they formed their group only after it was clear that Corbyn was about to win Labour in a storm, and this was done so they could control the opposition.

Such a pity that Corbyn dropped Paul the moment his ‘Jewish friends’ told him to.