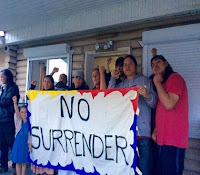 The RCMP, aiming their guns at the unarmed Secwepemc occupiers, immediately surrounded the building and arrested April Thomas, a Secwepemc woman who just returned from presenting the plight of the Secwepemc Nation to the United Nations Committee on the Elimination of Racial Discrimination in Geneva and is known in the community for her opposition to the elected band council system.

Those occupying the office are unarmed and have cited ongoing corruption, lack of transparency and accountability and regular forcible evictions in the midst of a growing housing crisis under the direction of the Williams Lake Indian Band Chief and Council as their reasons for closing the band office until further notice.

“The illegal eviction of Sheldon Wycotte and his family less than a week ago from the home his grandfather privately owned and helped build is further proof that Williams Lake Indian Band Chief and Council are in breach of their fiduciary obligations to act in the best interests of the people.

“There is no accountability or transparency in the decisions the Chief and Band Council makes, millions of dollars are missing and unaccounted for, our land is being sold out from underneath us and we are all suffering as a result.” – April Thomas, Williams Lake Community Member, Secwepemc Nation

The Secwepemc Women’s Warrior Society has joined the non-violent occupation of the Secwepemc Williams Lake Indian Band Office to continue to fight for our Nation, our Women, our Youth, our Future Generations. A sacred fire has been lit to call our People together to address the corruption of the Elected Chief and Band Council system imposed on us by the colonial Canadian government.

RCMP officers, aiming their guns at the unarmed Secwepemc occupiers, have surrounded the building and have arrested and charged April Thomas, a Secwepemc woman who just returned from presenting the plight of the Secwepemc Nation to the United Nations Committee on the Elimination of Racial Discrimination in Geneva and is known in the community for her opposition to the elected band council system.

Secwepemc families are being forcibly and illegally removed from their homes in the midst of a housing crisis, our People live in poverty and debt while millions of dollars borrowed from the federal and provincial governments for the illegal NSTQ treaty are unaccounted for, and those who attempt to defend their Territories, themselves or their families are targeted by the Chief and Band Council.

The structure of the Indian Chief and Band Council system, created and enforced by the Federal Canadian colonial government allows for decisions to be made by the Chief and Council without the knowledge and consent of the People. This is unacceptable. After exhausting all other means to address our ongoing concerns, we stand here now demanding to be heard. We will not tolerate the use of the RCMP in internal Nation matters, and we will certainly not tolerate the continued use of the RCMP in dealing with the unsettled land issue.

Our Lands were never ceded or surrendered and cannot be ceded or surrendered without the full, free, prior and informed consent of our People. The actions of the Chief and Band council, without the consent of the people, are therefore illegal and we do not recognize them. This includes all unlawful evictions of Secwepemc families and any and all decisions in regards to resource extractive industry, the NSTQ Treaty and our Territories.

All decisions made in regards to the Nation and our People must be made with the consent of our People, there is currently no participatory decision making protocol or policy that allows for this within the Elected Chief and Council system. Until the People are included in the decision making of the Nation, all decisions made by any other body claiming to represent Williams Lake Indian Band or the Secwepemc Nation are declared null and void.

We will continue to occupy the Williams Lake Indian Band office until further notice. We ask that Anne Louie, elected Chief, meet with us in person immediately to begin discussions in reference to our concerns. In solidarity with the INAC occupations across Canada and Indigenous resistance worldwide.