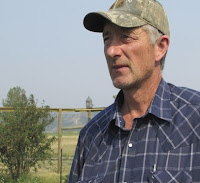 Nothing remains at the Rocky Mountain Fort site where Peace Valley farmers and First Nations camped for 60 days in the hopes of stopping clear-cut logging for the Site C dam.

The camp was dismantled in March and the old-growth spruce and cottonwood forest was logged, as BC Hydro prepares to convert the Class 1 heritage site into a Site C waste rock dump.


Ken Boon on his farmland in

But one notable thing still stands: the civil lawsuit BC Hydro filed in January against five campers and a supporter, a suit the B.C. Civil Liberties Association describes as a matter “of grave concern.”  The 13-page lawsuit accuses six Peace Valley residents of conspiracy, intimidation, trespass, creating a public and a private nuisance, and “intentional interference with economic relations by unlawful means.”

Most worrisome for the people named is that the suit seeks financial damages for BC Hydro that could result in the loss of their homes, life savings or other assets. Five of the six already stand to lose their houses, farms, land or traditional territory to the nearly $9 billion Peace River dam.

Josh Paterson, executive director of the B.C. Civil Liberties Association (BCCLA), says the association is extremely concerned about the civil suit because it could put a chill on freedom of expression. It might cause others “to think twice before they talk about their political opinion.”

BCCLA’s unease is heightened because BC Hydro is a Crown corporation, says Paterson. “For a government agency to come down in that way is of grave concern. What it does is send a message, perhaps deliberately, that ‘you’d better be careful if you plan to oppose these kinds of developments’…BC Hydro as a public institution should be very cautious about making these kinds of claims for damages it would impose.”

The civil suit, according to University of Victoria law professor Chris Tollefson, bears some of the hallmarks of a SLAPP suit, a strategic lawsuit against public participation.

SLAPP suits can stifle freedom of speech and quash opposition to controversial projects like Site C, which Premier Christy Clark has vowed to push “past the point of no return,” despite four on-going court cases against the dam by Treaty 8 First Nations and Peace Valley landowners.

A fifth on-going legal action, launched by the Blueberry River First Nations, claims treaty rights have been violated by the cumulative impacts of Site C and other industrial development in the Peace.

“If the end result is that they face financial or personal ruin, a key implication is that others won’t want to follow in their footsteps and take that risk,” says Tollefson.

“Then free speech becomes a luxury that only those who have nothing, or those who are incredibly rich, can afford.”

Tollefson, an expert on SLAPP suits, says it is the first time he has ever heard of a Crown corporation seeking damages from an individual in B.C. “or anywhere else for that matter,” for lawfully and peacefully exercising their right to protest on a matter of public interest.

Esther Pedersen, a Peace Valley farmer whose land was used to helicopter two survival shacks across the river for the campers and to collect food donated by community members, was also named. The suit includes “Jane Doe” and “John Doe,” leaving open the possibility for other Site C opponents to be singled out as well.

After BC Hydro filed the civil suit, it launched an injunction application to remove campers from the fur trade fort site on the Peace River’s south bank, near the confluence of the Moberly River. That area was deemed to be so ecologically and historically important that the B.C. government had made four designations to protect its heritage resources, wildlife and old-growth forests. The government even went so far as to set aside the land to become part of a future B.C. protected area.

But BC Hydro had obtained the necessary government permits to log the forest and convert the fort site area into a 216-hectare rock dump for potentially acid-generating waste rock from Site C construction. After the camp was ruled illegal by the courts, the people named in the suit said they were law-abiding citizens and promptly dismantled their encampment.

Ken Boon says he and his wife Arlene made a personal request to BC Hydro CEO Jessica McDonald to drop the civil suit when McDonald recently visited their farm.

Accompanied by a driver and an aide, McDonald spent two hours with the Boons. “We basically agreed to disagree,” says Boon of the visit, which he characterizes as cordial and personable. “We showed her around the farm.”

The Boons will lose productive fields to flooding and when riverbanks slough into the dam reservoir, a deep body of water that will stretch for 107 kilometres along the Peace River and its tributaries. The Boon’s home and farm buildings are slated to be destroyed, to make way for the $530 million re-location of Highway 97 away from the flood zone.

Boon says McDonald was willing to drop the suit, but only if the Boons were prepared “to sign a document basically stating we would not impede further work or stand in the way of the project.”

The Boons declined to sign. They believe it is their constitutional right to oppose Site C, which will flood at least 6,500 hectares of prime farmland and, in the words of a government-appointed panel that reviewed the project, have “significant adverse effects” on the environment and on lands and resources used by First Nations.

In late April, BC Hydro launched a second civil suit, this time against hunger striker Kristen Henry and three others camped outside the Crown corporation’s head office in Vancouver to protest Site C.

The Vancouver campers packed up 10 days later, saying they did not have the money or the inclination to fight BC Hydro in court. BC Hydro claimed “hundreds of thousands” of dollars from them in damages, the four campers stated in a press release.

BC Hydro said the camp had forced it to take expensive measures to step up security, including spending $30,000 for new door handles to which people cannot chain themselves, up to $60,000 a month to hire the company Xpera Risk Mitigation and Investigation to monitor the campers, and up to $35,000 a month to boost general security measures.

Even though that camp, too, is gone, the civil law suit stands, Dave Conway, BC Hydro’s Site C community relations manager, confirmed in an email. Conway said in a separate email that the crown corporation cannot comment on the civil suit against the six Rocky Mountain fort campers due to the fact that it is an “on-going court action.”

The majority of U.S. states, along with Ontario and Quebec, have anti-SLAPP suit legislation. In 2001, the NDP government in B.C. passed similar legislation, called the Protection of Public Participation Act. Six months later, that legislation was repealed by the newly-elected B.C. Liberal government.

Such legislation, says Tollefson, aims to expedite justice and provide the courts with tools to dismiss SLAPP suits early on “so a very deep-pocketed corporation doesn’t get to drag it out and benefit from simply being better endowed.”