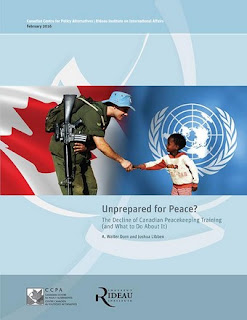 Do Black (Haitian) lives matter to Canada’s leading ‘left-wing’ foreign-policy think tank? Apparently not as much as having the corporate media mention their work by getting in bed with militarism disguised as peacekeeping.

At the start of Black History Month the Ottawa-based Rideau Institute co-published Unprepared for Peace?: The decline of Canadian peacekeeping training (and what to do about it). On the cover of the report (left) a white Canadian soldier, with a massive M-16 strapped around his shoulder, is bent over to hold the hand of a young black boy. In the background are Canadian and UN colours.

A call for the Canadian Forces to offer its members more peacekeeping training, Unprepared for peace? is premised on the erroneous notion that UN missions are by definition socially useful. And it repeatedly implies that Canada’s most significant recent contribution to a UN mission — the United Nations Stabilization Mission in Haiti (MINUSTAH) — was an operation we should be proud of.

The lead author of the report is Rideau Institute board member Walter Dorn, who has worked with and publicly lauded the UN mission in Haiti. “With financial support from the Department of Foreign Affairs and International Trade”, Dorn wrote, “the United Nations sent me on research trips to the UN missions in Haiti” and elsewhere in 2006.

During a sabbatical that year Dorn served as a consultant to the UN Department of Peacekeeping Operations and later briefed the “Military Directors of the UN Mission in Haiti” on “Technologies for Peacekeeping”. With help from MINUSTAH he published Intelligence-led Peacekeeping: The United Nations Stabilization Mission in Haiti (MINUSTAH), 2006–07. In it Dorn claims the intervention to overthrow Haiti’s elected government in 2004 was designed “to create basic conditions for security and stability.” The report largely focuses on UN intelligence activities in Cité Soleil, Port-au-Prince’s poorest neighbourhood.

In applauding UN operations in Cite Soleil, Dorn ignores MINUSTAH’s political role. After helping oust Jean-Bertrand Aristide and thousands of other elected officials, 500 Canadian soldiers were incorporated into a UN mission that backed up the coup government’s violent crackdown of Haiti’s pro-democracy movement from March 2004 to May 2006. The UN force also participated directly in pacifying the slums, which left dozens of civilians dead in Cité Soleil (a bastion of support for Aristide).

Dorn has delivered a number of lectures and interviews in favour of the UN force. In 2010 he presented on “The Protection of Civilians: The United Nations Stabilization Mission in Haiti.” The next year he told CBC Radio’s The World This Weekend the world is “crying for Canada” to expand its military role within the UN, noting “we have a long-standing police contribution in Haiti but we could easily contribute to the military side.”

He also rebuked critics of the UN. In 2012 the author of a Council of Hemispheric Affairs report, Courtney Frantz, told IPS MINUSTAH “perpetrated acts of violence” and had “become an instrument of the U.S., France and Canada in terms of their economic interests (including privatisation in Haiti).” In the article, Dorn countered Frantz, saying UN forces delivered “law and order”.

The next year Dorn told the Canadian Press that adding 34 Canadian soldiers to MINUSTAH was a “positive development. It helps Haiti. It helps the United Nations, the United States and Brazil.”

While dispatching Canadian soldiers may have helped the US and Brazil (the country leading the military mission), most Haitians see the UN as an occupying force responsible for innumerable abuses. Aside from the above-mentioned political repression, the UN’s disregard for Haitian life caused a major cholera outbreak, which left at least 8,000 Haitians dead and 750,000 ill. In October 2010 a UN base in central Haiti discharged sewage, including the feces of newly deployed Nepalese troops, into a river where people drank. This introduced the water-borne disease into the country.

Haiti represents but one example of Dorn’s support for Canadian backed UN violence. In writing about the early 1960s UN mission in the Congo Dorn ignores that mission’s role in the assassination of elected Prime Minister Patrice Lumumba. Similarly, he provides a wildly one-sided version of the early 1950s “UN police action” in Korea, which left as many as four million dead.

Dorn promotes greater Canadian engagement in UN military actions, but doesn’t mind if this takes place alongside US/NATO led wars. Last March he wrote, “the two approaches can coexist. It’s not one or the other and nothing in between. We can excel in combat and excel in peacekeeping.”

Sympathetic to Washington’s worldview, Dorn isn’t troubled by UN forces standing in for NATO. In Unprepared for Peace? he writes:
“In the post-Afghanistan period, the burden of addressing emerging international crises is increasingly shifted towards the United Nations, with NATO limiting its intervention primarily to air strikes such as those used in Libya in 2011.”

In the case of the Canada/France/Britain/US war in Libya, Dorn called for a UN force to mop up a conflict he deemed, even four years after, “justified… easily passing a Just War threshold.” Five months into that war the Independent reported him saying, a “peacekeeping mission in Libya would present the UN with an opportunity to overcome its surprisingly outmoded attitude to new military technology.”

As he campaigns for improved UN military capacity, Dorn enthused about the Obama administration’s commitment to strengthening UN weaponry. “The U.S. effort is genuine”, he said in March. “I’ve been to Washington three times in recent months to talk with the (U.S.) Department of Defense on helping bring United Nations peacekeeping technology into the 21st century.”

Dorn attracts corporate media interest, which presumably explains the Rideau Institute’s interest in collaborating. Unprepared for Peace? was cited throughout the dominant media and the Toronto Star editorial board even praised its conclusions.

But, Dorn’s establishment standing is largely due to his position at the Royal Military College and Canadian Forces College. The military’s website describes Dorn as a “professor at the Canadian Forces College and Chair of the Master of Defence Studies programme at RMC [Royal Military College].” Dorn survives, even thrives, at the military run colleges because elements of the Canadian Forces have long viewed “peacekeeping”, which demands a military force, as a way to maintain public support for its budget.

An indication of his opinion towards military spending, in 2014 Ipolitics reported, “[Dorn] said he is satisfied with the current size of the military. He said anything smaller would mean Canada is spending less than 1 per cent of GDP on its Armed Forces – and, as a professor of defence studies, that’s not something he could support.”

Perhaps some might argue that the “foreign policy left” should be a broad coalition that includes anyone who is in favour of anything called “peacekeeping” or that the Rideau Institute has simply not thought through the implications of promoting Dorn’s views. But how do you square either argument with Richard Sanders, coordinator Coalition to Oppose the Arms Trade, appeal to peace activists attending a 2010 Rideau Institute sponsored event with Dorn: “Knee-jerk support for anything with the UN ‘peacekeeping’ brand can lead folks to supporting mass murder of innocent civilians.”

Unfortunately, Canada’s preeminent ‘left-wing’ foreign policy think tank has spurned demilitarization and anti-imperialist voices to promote the views of the liberal end of the military. The Rideau Institute works with an individual who aggressively supported Canada’s worst foreign-policy crime of the first decade of the 21st century. But the victims were poor black Haitians so apparently that does not matter.

Yves Engler is the author of Canada in Africa: 300 years of aid and exploitation

Read other articles by Yves.