Can the Establishment Fix Its Bernie Sanders Problem?
by Shamus Cooke - CounterPunch
February 11, 2016 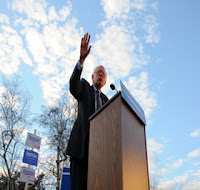 The Democrats’ fight against Bernie is appearing futile. Like a python choking on an elephant, they’ve miscalculated. The Party elites underestimated their opponent, and with each new attack the snake swallows an extra inch, harming only itself.

Establishment figureheads are taking turns ruining their reputation as they attempt to ruin Bernie’s. The U.S. ruling class as a whole revealed the depth of its crisis in this election: not since the Vietnam War have both wings of the establishment thoroughly discredited themselves.

The Republican wing combusted quickly while the Democrats have chosen a slower, more torturous form of self-harm.
The problem with both parties is their inability to serve the super rich while successfully appealing to voters. As inequality widens, democracy suffers. Focusing on the “billionaire class” has catapulted Bernie’s campaign, but the presidency is not an institution that just anybody is allowed to capture.
How will this all play out? Nobody knows. Polls swing wildly in times of flux, making predictions risky. Here are two questions whose answers will guide the future of the election:

1) Can Bernie win the Democratic nomination?

Shamus Cooke is a social service worker, trade unionist, and writer for Workers Action (www.workerscompass.org). He can be reached at This email address is being protected from spambots. You need JavaScript enabled to view it.