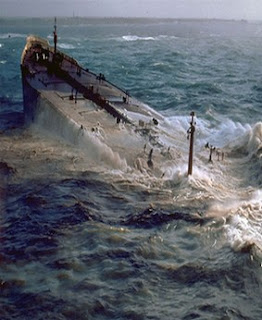 I have had the chance recently to sit back and look at what Damien and I and indeed others like Erik Andersen have written over the last four or five years on environmental matters and I wonder whether or not we haven’t fallen into the trap of debating serious social and safety issues strictly on the basis of technicalities.

Governments and industry throw out statistics and we dutifully match those with some of our own while we are forgetting more important issues such as do we want pipelines and tankers in the first place?

From BC’s point of view – which is my home – there are two intertwined issues.

I will be criticized no doubt for taking the BC point of view but why in the hell shouldn’t I if Christy won’t?


First, I have no say in all this. I’m up against the federal government plus Victoria and hundreds of billions of dollars from them and industry to put their side of a debate I can listen to but not take part in.

Thus, my first point is that there has been, throughout, a democracy deficiency which makes a mockery of the word. It’s said, of course, that democracy is practiced on our behalf by the people we elect to the legislature and the House of Commons. Anyone with half a brain knows that that’s rubbish. None of the MLAs or MPs we elect have any more influence on these events than does a stray cat. If we can’t get our minds around that – if we cannot understand the truth of that, then we might just as well pack it in and accept whatever is meted out to us by our “betters”.


Let’s just look for the moment to two areas in greater Vancouver, Burnaby and Howe Sound. Have any citizens ever been asked to vote on whether or not they want either the Kinder Morgan pipeline expansion or an LNG plant?

The honest answer is more than negative because instead of democracy, phoney assessment processes have been set up with an illusion of citizen participation – mockeries of justice.

We know that if authorities tell big enough lies often enough then people will believe them. As if that needed further demonstration, we have countless examples being bombarded into our lives every day.


Nothing to worry about


Let’s look at pipelines. The federal government particularly wants pipelines to the BC coast and in fact agreed with China that with the new trade agreement (FIPPA), one will be built. (I don’t remember being asked about that, do you?)

What about government’s obligation for our safety and well-being? They tell us over and over again that pipelines are safe and – this is good for a wry laugh – if perchance they do leak, why, they will do no damage because the company will clean it up in no time! The same about LNG tankers. Nothing bad can possibly happen and, again, even with some unbelievable bit of bad luck and something leaked somewhere, why the company and the authorities would have that out-of-the-way before you could say “Shazam!”

This means, of course, that there are no concerns about using passages like the Fraser River, Howe Sound, or Juan de Fuca because accidents can’t happen and, forgive the repetition, in the extremely unlikely event a tiny little one did occur, why, the authorities would have that fixed up in no time.

During the time of the more aggressive Enbridge debate a few years ago, over and over the company and politicians assured us that there was no danger of accidents with Northern Gateway and in the unlikely event…blah, blah, blah. The same time, we read on a daily basis what had happened to an Enbridge spill on the Kalamazoo River in Michigan. I was scarcely the only one to ask what the devil would happen if that kind of a spill occurred, say, in the Rocky Mountain trench or the Great Bear Rainforest.


So, before I go further, I submit to you that the evidence is overwhelming on the subject of pipelines, oil and LNG tankers: The companies and governments simply lie through their teeth and are prepared to say anything, no matter how preposterous, to support their demand to use our land and safety for their profit.

In all of this, there’s a shining truth that cannot be denied. There will be accidents with pipelines and tankers as a matter of plain mathematics. It’s a statistical question – the law of probabilities. And the more you do something, the more likely a bad thing is going to happen. One of the major factors is, of course, human error. This will never be eliminated no matter how modern and computerized our activities become.

Therefore, let us take this as a given: pipelines are going to burst, tankers are going to hit things and on and on it goes, no matter what we do or the safety precautions we take.

If that point is made, the companies and the government barely pause to change gears as they go into their “we can fix anything” mode. It doesn’t matter that the Kalamazoo River is still full of Bitumen five years after the spill – why, spills can be easily handled. It doesn’t concern them that many of the locations are out of reach of help or, as we know from Kalamazoo, there isn’t really any help anyway.
Don’t forget Paris

There is a third string to the bow – according to all experts including those at the recent Paris Conference, we’re not supposed to be producing, moving and using this stuff anyway! These fossil fuels are the cause of our climate problems and our poisoned atmosphere. Why, then, are we going through these hoops to increase the use and transportation of the very thing that’s causing us all the trouble and that we have sworn to get rid of?


Now let’s get down to cases. I have no right to speak for British Columbians individually or collectively and I am not doing that. I am speaking just for me.

I don’t want any pipelines into British Columbia. Never mind why I don’t want them, I just don’t and insist upon my democratic privilege to stop them. Going further I don’t want them because they destroy the beautiful environment in which I have always lived and that I wish to leave to my children, grandchildren and great-grandchildren. I have no wish to screw up my homeland to make money for people who shouldn’t be trafficking in fossil fuels in the first place.

Having said that, I don’t want to take the risks that are associated with this industry. These are not fiddling little risks but enormous certainties. The tendency of industry is to expand, so the damage will expand as well. I don’t want to rely upon self-serving governments and industry telling me that they can clean things up as if nothing had happened when I know that’s bullshit.

I deny utterly the right of any other Canadians to put me, my family, community, and my environment at the certainty of ongoing disasters just so they can make money off something which is an internationally recognized poison.

Pipelines and fossil fuel tankers are ever-present, ongoing, serious dangers that contribute nothing but misery to the world at large.

I ask only that we treat these fossil fuels as we in British Columbia treat uranium mining and recognize that they are too dangerous to hand over into the hands of the greedy.