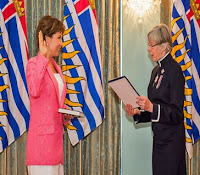 This is the time of year and the point in the government’s mandate that analysis of the months to come is de rigeur.
Time will demonstrate that Christy Clark’s big mistake, when assuming the premiership, was not nullifying Gordon Campbell’s Energy Program which has, predictably, enriched large international corporations and bankrupted BC Hydro.

Had Clark tackled this issue, with a courage of which we have seen no sign, restored BC Hydro’s obligation to make new power and abrogated the sweetheart deal with the private companies, BC Hydro would be in decent financial shape and site C would still be the pipe dream of pointy-headed BC Hydro energy assessors.

In over her head

Ms. Clark’s second mistake was seeking the premiership in the first place, it now having been clearly demonstrated that she had none of the necessary skills. Past premiers who’ve been able to operate with limited skills surrounded themselves with talented advisers who understood history, world affairs, and the psychology of the public. This the premier has clearly avoided.
The Clark government has been a calamity on social issues: education, welfare and health, with the Ministry of Children and Family Development being the most tragic. Given Clark’s record as education Minister, this is no surprise.
Christy Clark went into government with no discernible experience at anything, least of all business, spawning a culture of political and economic ignorance the likes of which we’ve never seen before, not even with the worst of the NDP daydreamers.


All apples went into the LNG basket. From the outset, expert after expert predicted precisely what would happen. This paper led the way, presenting experts from all facets of the worldwide energy business stating that if there were viable markets for British Columbia – a dubious proposition – we were too late, with too little and too far away. It seemed that every warning was followed almost instantly by a confirming news story. Rather than listen to honest experts she didn’t agree with, Clark chose international crooks who promised the mother lode of all riches.
Bad enough if the premier had simply said LNG was promising for BC but in fact she touted it as the only thing for BC and painted glorious pictures of a “Prosperity Fund”, all provincial debts paid, employment everywhere and a province whose financial troubles were forever behind them. Needless to say, it’s not easy to back away from such a promise.
Clark, with no experience at anything, has dealt with corporate giants, absent any advice except from flatterers who would profit at our expense, while her high-profile, voluble principal adviser, Rich Coleman, is a joke – unless you believe that one can jump from a cop car into the boardrooms of world business and make intelligent deals about international energy matters which confound the most experienced experts. This has been her largest political mistake and has removed the tiniest vestige of credibility from her and her party.


The Liberals’ only strength may be that nobody is ready to take over! There may just not be a government-in-waiting.
John Horgan made the fundamental error of supporting the government on their key policy decision, namely LNG. He has married the party to that issue from the moment the exploration for gas starts till the day the LNG tanker leaves our waters, thus has abdicated any right to criticize any part of the process.
As Lord Randolph Churchill famously said, “it is the duty of the opposition to oppose.” This is not an idle gibe but a sanctified political axiom. Under our system, the opposition, even though it may not have its heart in it, must always hold the government to account for every jot and tittle of its policy. If it doesn’t, what’s happened to Mr. Horgan and the NDP is inevitable – approving the government’s policy also means adopting all of its shortcomings, whether you like it or not. If anything goes bad, you’re stuck with it as much as the government.

NDP still has some cards it can play


Liberal cabinet members are, putting it kindly, nonentities, the exception being (perhaps) Finance Minister Mike de Jong who, since he went on that Asian LNG caper last summer to Malaysia, has carefully taken cover and artfully distanced himself from Christy and the Gumshoe. On the other hand, the NDP front benchers are better known, experienced and not without some ability. Mr. Horgan must find a way to use them effectively and get them better known.
The question is whether Opposition Leader John Horgan has the political balls to say something to this effect: Energy is the issue – clean energy. Fossil fuels are not only not the answer, they are the problem. We cannot meet our climate change commitments and still produce, use and export fossil fuels. We can’t have it both ways. It will take special effort, conservation, alternative and new energy sources. It means real sacrifice and dedication. We have no choice but to abandon make-believe, phony politics and bullshitting the public. None of us can claim any longer that there’s an easy way out, a silver or LNG bullet – that’s the past.
We thought LNG could benefit us all but we were wrong, as the Paris Conference recently demonstrated. John Horgan and the NDP stand for immediate, longterm, tough policies and, given a mandate, we will not waver.
We have no more time – there are no easy options left.


Is this a dangerous position for John Horgan and the NDP to take?
Of course – all political positions are dangerous. People don’t like bad news. But this one has the huge advantage of being honest. Fossil fuels, global warming, atmospheric degradation, environmental protection and matters of that sort – things that seemed so airy-fairy less than a decade ago – are now front and centre in the minds of the public. Not all politicians have caught up to this, yet, to many campaigners in the recent federal election, the main issue on the front porch was the environment.
This tells me that Mr. Horgan can start again and that if he does, he can win in 2017.
If, on the other hand, he continues to drift and dream, he and his party will accomplish the impossible: running second to the worst government British Columbia has ever had.