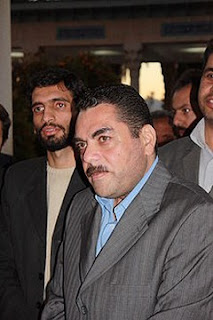 The Israeli Air Force assassinated, on Saturday at night, the former political prisoner and senior Hezbollah leader, Samir al-Kuntar, in an air strike in the Jermana area of the Syrian capital Damascus.

The Hezbollah party in Lebanon said the Israeli Air Force violated Syrian air space at around 10:30 at night, and fired five missiles into a residential building, killing six people, including al-Kuntar, and wounding at least twelve others.

Initial reports were first unconfirmed, but his brother later announced on his Twitter account the confirmed dead of al-Kuntar.

Archive photo of Samir Kuntar in Iran
(image from wikimedia)

Samir al-Kuntar spent 29 years in Israeli prisons, and was released on July 16 2008, under a prisoner-swap agreement reached through negotiation between Hezbollah and the Israeli government through a third party.

As part of the agreement, Israel released al-Kuntar and four other Hezbollah members, who were taken prisoner during the July 2006 war between Hezbollah and Israel, in which Israeli troops invaded and bombed Southern Lebanon, and Hezbollah fired rockets across the border into Israel.

Hezbollah is the leading party in southern Lebanon, and has a fighting force that works to deflect further Israeli invasions into Lebanon.

Retired Israeli major general and current Member of Knesset (Parliament) with the Zionist Union party, Major. Gen. Eyal Ben-Reuven, hailed the reports of the assassination, and said that the Air Force and all others involved in the incident “should be commended for the successful operation.”

Ben-Reuven, the former head of the Northern Command on the Israeli army, said the Israeli government is preparing for retaliatory attacks by Hezbollah.

Israel held al-Kuntar responsible for the April 22nd 1979 attack that led to the death of four Israelis: a police officer, an Israeli civilian and his 4-year-old daughter, while the man’s other daughter, 2, was accidentally suffocated by her mother, while trying to keep her quiet. The attackers allegedly kidnapped the family in Nahariya and took them to a beach, then tried to load their hostages on a rubber boat.

Israeli police decided to attack with full force instead of attempting to negotiate, and the father of the family and a police officer were killed. The 4-year old was killed when her head hit a rock during the scuffle. Two fighters, identified as Abdul-Majid Aslan and Moayyad Mhanna, were killed, while al-Kuntar and Ahmad al-Abrass were captured. Al-Abrass was later released, along with 1150 detainees, in a prisoner swap agreement, led by the Popular Front for the Liberation of Palestine – General Command.

After capturing al-Kuntar, an Israeli court sentenced him to five life-terms, Upon his release in the prisoner swap deal, he returned to Lebanon and joined Hezbollah, then went on to live in Syria.