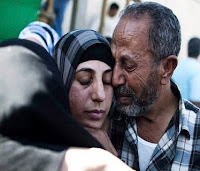 Throughout her hunger strike, that of exactly 47 days, Hana Shalabi never slept consistently for a number of hours.

In the first few days of her strike, she would doze off only to wake up with the sudden fear that someone was trying to hurt her. But after the first week of the strike, having nothing but a few sips of water a day, her body simply ceased to function in a normal way.

So, instead of sleeping, she would fall into a state of delirium, overtaken by frenzied hallucination where memories and persisting future fears coalesced into a sonata of night terror.

I interviewed Hana recently, through a series of discussions that extended for hours, trying to understand what compelled her to risk her life to obtain conditional freedom in Gaza, and to present her story as a showcase for the phenomena of hunger strikes as a form of political struggle inside Israeli prisons. Currently over 7,000 Palestinian prisoners are held in Israeli prisons, over 500 of them without trial.

Hana was born on the 7th of February, 1982, the same year that Palestinian factions were driven out from Lebanon and the refugees of the Sabra and Shatila Camps were slaughtered en-masse. When her father, Yahya, and her mother, Badia, were finished with having children, the final tally was ten. Of the six females, Hana was somewhere in the middle, after Najah, Salam and Huda, and before Wafa and Zahira. Samir was the youngest of the brothers, and only two years older than Hana.

Hana’s family originally came from Haifa. They were exiled from that beautiful port city, along with hundreds of thousands who today constitute the bulk of Palestinian refugees. After a relatively brief but arduous journey, they settled in the village of Burqin, not far away from Safad in the north, and adjacent to the town and refugee camp of Jenin.

Burqin, tucked gently near the Marj Ibn Amer Valley, offered the Shalabis a temporary respite from an otherwise harsh existence. But that relief was rudely interrupted when Hana was still a child. She was eight years old, chewing on a hearty sandwich of Za’tar and eggs when a boy named Mohammed, from the neighborhood, dashed towards her as fast as he could.

He fell on his knees and whispered to her for the last time, “Please help me.” She stood motionless. When he finally collapsed, a large hole in the back of his head revealed itself. He had been shot by the Israeli army moments earlier. That took place during the first uprising, and the boy was one of many who were killed in Burgin. Hana joined the rebellion by collecting rocks for the boys who confronted soldiers as they raided the village almost daily.

Hana, now 33, speaks of these memories with the same purity of a child who was swept with the euphoria of a revolution, which she barely comprehended in any articulate sense. She was angry at the death of Mohammed, and that was that.

She grew up angry, a rage that was reflected in many people all around her. Her brother, Omar, had joined the Black Panthers, whose members were all sons of peasants and cheap Arab laborers in Israel. They met in caves deep in the mountains and used to hide there for days before descending upon the villages, masked and armed, to declare strikes and to mobilize the people to rebel. But when Omar was injured during a nightly skirmish with the soldiers, the secret became known to everyone, including her livid father, Yahya, who realized that his constant attempts to keep his kids out of trouble had failed horribly.

The story of Omar was repeated, time and again, among her other siblings, who were almost all involved in the Resistance in various capacities. Huda, the older sister, was jailed for allegedly attempting to stab a solider, soon after her fiancé was ambushed and killed by the Israeli army. His name was Mohammed al-Sadi. He was killed while on his way to officially propose. Huda learned of his murder on the radio.

Samir was the youngest of the boys. Soldiers, who raided the Shalabi family home often, terrified him. He hid under the bed as they destroyed everything in the house, tore his school books and urinated in their olive oil containers. At 13, he left school and, a few years later, he brandished a gun and joined the Resistance, living mostly in the mountains. When the Israeli army killed him, he was one of 17 others marked for death, all fighters with various factions. He was killed, along with a comrade of his, near the valley where Samir spent many of his days playing as a boy and helping his father care for their land.

Samir was an avid horseman, and Hana grew up to love horses, as well. However, she resisted her father’s incessant attempt at persuading her to become a veterinarian. She wanted to study law in Tunisia, a dream that is yet to be fulfilled.

Samir was her best friends. They shared secrets, and just before he marched off to his last battle, he had asked her to make sure that his coffin was covered with flowers, especially red Hanoun, that grew wild all around Burgin. She kept her promise.

Shortly after Samir was killed in 2005, Hana was arrested by the Palestinian Authority who accused her of plotting an attack on Israel to avenge her brother. They interrogated her for many days, and when she denied the accusation, a Palestinian officer slapped her across her face until it grew numb and she fell to the ground.

Later, the Israelis arrested her. They kept her in an underground dungeon and subjected her to months of relentless physical and psychological torture. When this, too, failed, they sentenced her to six months of administrative detention that was renewed several times. After spending years in captivity, she was freed on 18th of October, 2011 from HaSharon Prison. Her release, and that of hundreds of others, was the outcome of an agreement between Hamas and Israel, after which an Israeli soldier, who was captured by the Resistance years ago, was also set free.

The celebration lasted for months; when it subsided, she was arrested again and thrown in jail. Her latest experience was even more humiliating, details of which are divulged reservedly by Hana. On the day of her second arrest, on the 16th of February 2012, her jailors were particularly brutal, but she was also exceptionally determined. Israeli newspaper, ‘Yediot Ahronot’ claimed that Hana was plotting to kidnap a solider, but Hana had no patience to engage her interrogators in a discussion. Instead, she went on a hunger strike that lasted for 47 days. Her main demand was her freedom.

In the latter stage of her strike, when death was looming, she opened her eyes in an Israeli hospital where her arms and legs were chained to the bed. She was in Haifa, a discovery that brought a smile on her lips. “This is the land from which my family came,” she said softly as her smile grew wider. Her declaration was communicated to the guards and, in turn, to the prison authority, which immediately ordered her removal to outside Haifa. Hana had never visited Haifa and, for a fleeing moment, had settled with the joyful idea of dying there.

Following a deal signed under suspicious conditions and involving the PA, she ended her hunger strike in exchange for her freedom, but only to be deported to the Gaza Strip. The agreement stated that Hana was to be repatriated to the West Bank three years later, but she never did, and neither Israel nor the PA honored their side of the agreement.

Hana insists on embracing life, even within the confines of war-torn and besieged Gaza. “If I don’t, the Israelis win. I cannot give them that satisfaction,” she told me. “Resistance is insisting on living and thriving, despite the pain.”

She still dreams of having the opportunity to travel and explore life beyond the familiar horizon of life under siege.

(This article is based on a chapter entitled: Death Note, in my forthcoming book on the people’s history of Palestine.)

Dr. Ramzy Baroud has been writing about the Middle East for over 20 years. He is an internationally-syndicated columnist, a media consultant, an author of several books and the founder of PalestineChronicle.com. His latest book is My Father Was a Freedom Fighter: Gaza’s Untold Story (Pluto Press, London). His website is: ramzybaroud.net
More articles by:Ramzy Baroud