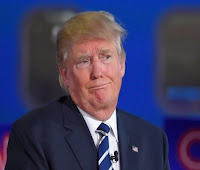 In case you missed last night’s two hour steelcage GOP extravaganza, here’s the 26-second food fight between frontrunner Donald Trump and Jeb Bush that everyone is talking about.
Not surprisingly, the topic was one that dominated the discussion all night: What candidate is best qualified to savage civil liberties at home while bombing the rest of the planet into oblivion?

Judging by his ability to disembowel Bush in front of hand-picked audience of red-meat party loyalists, Trump appears to be the hands-down winner.
It should be pretty clear by now, that “ratings machine” Trump is more than a passing phenom that will suddenly vanish when voters see that he doesn’t really have a party, a platform or a good grasp of the issues. That’s not going to happen.

The imperious real estate tycoon is an explosive and charismatic character whose shoot-from-the-hip candor and rapier-like sarcasm have transformed him into a right wing Huey Long. That’s right, Trump has become a populist icon who thrives on biased attacks of a media that is justifiably reviled by nearly everyone.
Just imagine a mercurial megalomaniac like Trump in the oval office just inches away from the Big Red Switch that ignites the Pentagon’s prodigious arsenal of nuclear weapons.
It’s worth thinking about at least…