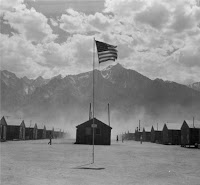 George Stephanopoulos, ABC News: “You’re increasingly being compared to Hitler. Does that give you any pause at all?”
Donald Trump: “Because what I’m doing is no different than what FDR [did]. FDR’s solution for Germans, Italians, Japanese many years ago. This is a president who was highly respected by all. He did the same thing — if you look at what he was doing it was far worse.”
When it comes down to core values, you can never make an exception. This week shows why.
Manzanar Japanese Internment Camp
After Republican presidential frontrunner Donald Trump called for a ban against Muslims to enter the United States — all Muslims, including businesspeople, college students, athletes, performers, even U.S. citizens currently living abroad — corporate media and the experts in their contact lists called the idea outlandish.
Primarily, they said it was crazy because it is unprecedented.
For example, NYU law professor Nancy Morawetz told The New York Times:
“This is just so antithetical to the history of the United States. I cannot recall any historical precedent for denying immigration based on religion.”
True, there hasn’t been a religious test for admission to the U.S. But in a broader sense, Trump’s idea continues a long tradition of using immigration rules as expressions of American racism and intolerance.
There have been plenty of blanket bans motivated by bigotry. The Chinese Exclusion Act comes to mind. The Immigration Act of 1924 banned all immigration to the U.S. by Asians and Arabs. People with HIV-AIDS weren’t allowed to visit the U.S. from 1987 to 2009.
In each case, supporters of blanket exclusions argued that their extraordinary measures were “temporary” (that’s what Trump says) responses to unusual threats, such as the 19th century “yellow peril.” (Asians with “special powers,” Americans were told, were going to crush white culture.) Now we understand that the threats were trivial or nonexistent, that these responses were outlandishly reactionary. At the time, however, idiots and opportunists exploited the masses’ fear and ignorance to whip up paranoia — which set some terrible precedents we’re living with today.
Trump’s no-Muslims-need-apply plan is being criticized harshly. Rightly so, though no one asks the obvious question: If this is about border security, wouldn’t a real Islamic terrorist lie when asked about his religious affiliation, or claim to have renounced Islam, while applying for a visa? After all, some of the 9/11 hijackers were clean-shaven, drank alcohol and hung out in topless bars.
If anything, criticism of Trump has been too muted. Not one single Republican presidential candidate or major GOP official has said he or she would not support Trump should he win the Republican nomination. Believe you me, they’ll all fall in line if The Donald becomes The Man running against Hillary or Bernie.
Such weaselry is part the way these things usually go. First there’s some sort of shock. Then a demagogue enters the scene who frames the shock as part of a crisis, followed by overreaction (we must give up some freedoms to stay safe) based on “exceptional times” because “everything has changed. Ultimately sanity returns, thanks to the passage of time, the cooling of passions and moving on to other concerns. This is a pattern we’ve seen before and we will surely see again — mainly because previous overreactions, many of them never renounced, serve as a perfect justification for new crimes against humanity.

“Look at what FDR did many years ago,” Trump said by way of justification, “and he’s one of the most respected presidents.”


So, sadly, true.
During World War II Franklin Roosevelt issued presidential proclamations that allowed officials to declare people of German, Italian and German ancestry to be “enemy aliens” who could be detained without trial. Even though there is no evidence that any Japanese-American ever committed a disloyal act during the war, FDR ordered the internal deportation of tens of thousands from the Pacific Coast to concentration camps. Many lost their homes and their businesses. (Trump hasn’t decided whether he’d create Muslim concentration camps beyond the existing facilities at Guantánamo and overseas.)
There are two problems with FDR’s assault on the basic legal principle that we are innocent until proven guilty: his actions themselves, and the failure of our political and legal culture to repudiate him and what he did.
Had they been reversed and retroactively annulled, the FDR actions cited so approvingly by Trump would nevertheless stand as historical precedent. When something Really Bad happens — a sneak attack on your naval base, planes crashing into buildings, a couple going berserk and shooting up their workplace — all bets are off, including the Constitution.
But they were never annulled, much less reviled. So they also stand as legal precedent.
As Trump says, FDR is considered one of our finest presidents. The New Deal and winning World War II are what we remember.
The internment camps, which affected only people with yellow skin, are a minor footnote in history classes. The message is clear: No one cares. If we thought the camps were really so wrong, Roosevelt would stand with Nixon and George W. Bush among our worst leaders, the same way Woodrow Wilson’s accomplishments in World War I and with the League of Nations are now being eclipsed by his racism.
And he should. Send just one kid to a camp, as FDR did to thousands, and yeah, that really does erase the Social Security Act.
The United States has never fully renounced those concentration camps for Japanese-Americans. Forty-three years after the end of World War II, Congress finally issued an apology but only paid token $20,000 payments to each surviving victim. (40,000 of the 120,000 prisoners had died.) No one was compensated for lost property. It’s still a fairly obscure chapter in history; I’d be surprised if 10% of Americans know it happened.
Disgustingly, the legal underpinnings of Roosevelt’s actions remain in full effect, namely the 1944 Supreme Court ruling in favor of the government in Korematsu v. United States. Fear of espionage and sabotage — though completely unsubstantiated — outweighed the right to due process of Japanese-Americans, said a 6-3 majority.
As a rule Americans prefer “to look forward as opposed to looking backwards,” as Obama said in 2009 about Bush-era torture. The trouble is, the future winds up looking a lot like the past unless that past is truly dead and buried.
Use waterboarding, as U.S. troops occupying the Philippines did with impunity against Filipino independence fighters, and it comes back after 9/11. (No Marines were ever prosecuted for using this form of torture, but the U.S. did execute Japanese soldiers who waterboarded American POWs during World War II. Since Obama refused to prosecute CIA waterboarders, we can be sure it will happen again.)
Allow the president to fight a war without a formal declaration of war, “exceptionally” violating the Constitution as Congress did in 1950 with Korea, and a future president will do the same in Vietnam. And Panama. And Iraq. And Bosnia. And Afghanistan. And Iraq again.
And now Syria.
Because America never drives a stake driven through the darkest heart of its history, like the Korematsu decision, “exceptions” become precedents that keep coming back.
Several of George W. Bush’s memos calling for the suspension of the ancient right of habeas corpus cited Korematsu in order to justify holding Muslim POWs without charges or access to an attorney at Gitmo. In 2004, the Bush Administration used the precedent to fight a challenge by Gitmo detainees — prisoners who have been languishing under both Bush and Obama. (The Military Commissions Act of 2006 ended habeas corpus, the 800-year-old right to a court trial, for American citizens.)
As recently as 2014, Justice Antonin Scalia said the ruling remained in effect. It was, he said, “wrong, but it could happen again in wartime.”
Or, under a President Trump, in peacetime.
Just this once.
Because this time is different.

Ted Rall, syndicated writer and the cartoonist for ANewDomain.net, is the author of the book “Snowden,” the biography of the NSA whistleblower.