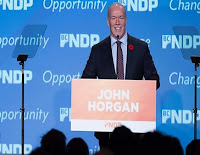 Political pundits are busy analyzing the recent NDP convention and I can tell you it’s easier to interpret the entrails of a rooster. Conventions organized to look like sunny expressions of the party’s solidarity and readiness for an election usually disguise more than they reveal.
What this NDP clambake tells me is that the party is sick to death of leadership fights and “the devil you know is better than the devil you don’t” – a highly dubious substitute for skill and character.

Starting with the good news, the party caucus has done a decent job of exposing government malfeasance, in the health and the email scandals in particular, and demonstrating the general incompetence of the Premier and her cabinet. (Not too tough considering how willingly they do that on their own.)
Unfortunately for the NDP, history tells us that these sorts of issues don’t have “legs”.
When it comes to election time, the public has different considerations; from experience they expect government misbehaviour and only want to know what will happen to their pocketbook in the next four years. Election after election has proved that.
It’s also true that parties tend to lose elections rather than win them and the Clark/Coleman government, now old and corrupt, is ready for a rest – a long one. A permanent one, in my view.


To take advantage, the Opposition must look like a government in waiting. If, however, as we have just seen in the recent federal election, voters want rid of a government badly enough, they’ll say, “they can hardly be worse than this bunch” and overlook opposition inexperience.
It’s foolish in the extreme for an Opposition to rely on this happening, yet Mr. Horgan, in his keynote speech, said nothing about the environment and showed no inclination to back off the party’s idiotic, wholehearted support for LNG. If this remains NDP policy, it will offer the atrocious Clark/Coleman bunch a lifeline because voters do care about these issues and before you write Premier Photo-op off, remember Mair’s Axiom I: “You don’t have to be a 10 in politics, you can be 3 if your opponent is a 2.”
Whether or not Mr. Horgan realizes it, LNG will be an issue in 2017, much including the proposed Woodfibre LNG plant. The Horgan-led NDP has badly let down those who expect that an Official Opposition will ask some basic questions about controversial and dangerous mega-projects like this one. WLNG is not a NIMBY issue at all but a real and substantial danger to life and limb, not to mention to the environment of this beautiful fjord.
Howe Sound belongs not to those who live near it but to all British Columbia – it’s a jewel in the provincial diadem. Thanks to a lot of volunteers particularly, Howe Sound has nearly recovered from decades of dirty industry; the herring and salmon runs are returning to what they once were, sea mammals, including several types of whales, are back, as are seals, sea lions, and even porpoise. It is incredibly beautiful and unspoiled even though next to a metropolis. I would have thought that not even the most cynical politician would place all this in jeopardy without at least asking a few simple questions of the government. I was obviously wrong.

Woodfibre gets a free ride

There’s the appalling environmental assessment pantomime which the government relied upon to approve WLNG with very significant aspects of the proposal not properly canvassed.
Before getting to the basic environmental questions, I must ask Mr.Horgan why he has never questioned the Clark/Coleman government about the integrity of Woodfibre LNG?
It’s owned, as most now know, by a crook from Indonesia best known for paying a $200+ million fine for evading taxes; for burning down jungles; and brutally evicting people who may be uncomfortably in the way of his plans. He’s not hard to investigate, Mr. Horgan, so why don’t you want to know why the Clark government is involved with this sort of man in an operation of this magnitude?
There’s the question of the plant itself, the pipelines involved, the safety of converting natural gas into LNG, the disposal of waste – especially warm water – the impact on marine life around Squamish, which is becoming increasingly important. All the normal environmental concerns and questions the citizens of Squamish and surrounding areas want answered were sloughed of or ignored by the ersatz environmenal assessment “process”.
Mr. Horgan, why won’t you, as Leader of the Official Opposition, on behalf of all British Columbians but Squamish people especially, carefully examine the Clark/Coleman bunch on these critical issues? Isn’t that your job?


Then there’s the question of transportation of the LNG by tankers down Howe Sound itself. Here, in a nutshell, is the explosive (sick pun intended) issue.
The Society of International Gas Tankers and Terminal Operators (SIGTTO)* – the acknowledged world authority on LNG issues – has set standards for the LNG tanker trade. SIGTTO’s #1 and overriding criterion is that there is no acceptable probability of a catastrophic LNG release, i.e. the only acceptable probability is ZERO.
On the critical issue of separation, Sandia International Laboratories has defined for the US Department of Energy three hazard zones of 500m, 1600m, 3500m surrounding LNG tankers. The largest, a circle of 3500m radius, centred on the moving ship, represents the minimum safe separation between tanker and people. Other LNG hazard experts say at least 4800m is a more realistic minimum safe separation.
Plainly – and you need only look at the chart – Howe Sound is far too narrow. Surely that in itself must be fatal to the project!
Isn’t the safety of Howe Sound, extending to western West Vancouver, even worth a question to the Premier, Mr. Horgan?
Let’s just sum up what you evidently see as unwarranted whining, Mr. Horgan.

1. The owner of the company we must depend upon for taxes and royalties, plus caring of our delicate environment, is a big-time tax evader with an utterly appalling environmental record.

2. The people of Squamish and surroundings, facing the immediate consequences of any environmental “accidents”, are asked, and arrogantly expected, to accept a phoney environmental process, where the “fix” was in from the start, and which gave Woodfibre LNG the patented Christy Clark corporate whitewash. They would have been more honestly dealt with by a denial of process than by a process reminiscent of a Soviet Show Trial.
3. The most disastrous consequences to be feared are from a tanker mishap, which, mathematically, is not a possibility or even a probability but a certainty – merely a matter of time. This time will clearly be abridged by an utter lack of concern about internationally-recognized rules re: hazard and separation zones yet, Mr. Horgan, you haven’t uttered a peep to the government about this critical issue!

We’ve asked for NDP help, yet on these issues, of so much concern to so many of your fellow citizens, the Official Opposition, including you and your MLAs – because of your blanket approval of LNG – has been as scarce as a tumbler of Glenfiddich at a temperance meeting.
Is this the care you will show for British Columbians if you become premier?
Yes, the sunny simpleton and her trained seals now running the province must be replaced, but with the likes of you, sir? A man lacking the political or moral courage to help citizens threatened by crooks, environmental rapists, and tanker disasters, as our Premier? A Leader of the Official Opposition who doesn’t understand his duty? A man who imposed a catastrophic LNG policy on his party because he’s afraid of losing a couple of seats where highly destructive and dangerous fracking is prevalent?


BC deserves the Green Party or a new party representing the people of the province, not just cheerleaders led by a political sissy. But time is short, with just a year and a half left for serious contenders to get their asses in gear.

*WLNG claims that because they are members of SIGTTO that their plan is safe. This is corporate bullshit. Membership does not imply let alone confirm compliance and, indeed, anyone reading this can join SIGGTO as an associate member – which is all WLNG is!