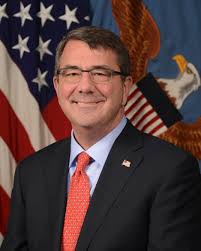 Here’s the scoop: Two days before the swaggering Sec-Def touched down in Germany, Gazprom announced that it was putting the finishing touches on a massive deal that would double the amount of Russian gas flowing to Germany via a second Nord Stream pipeline.

The shocking announcement made it look like the clueless Ash Carter had no idea what was going on and that his efforts to isolate Russia were a complete flop.
And, make no mistake; the deal is huge, big enough to change the geopolitical calculus of the entire region. Robert Morley explains what’s going on in a recent article at The Trumpet:

“Once this pipeline is finished, almost all of Eastern Europe can be completely cut out of the gas picture. There will be no need for any gas to transit through Ukraine, Poland, Romania, Belarus, Hungary or Slovakia.” (Gazprom’s Dangerous New Nord Stream Gas Pipeline to Germany, The Trumpet)


Yep, Ukraine is out and Germany’s in, which means that Washington’s plan to extend US hegemony by driving a wedge between Russia and Europe is down the plughole.

Judo expert Putin has done it again; he waited until the eleventh hour to pull the rug out from under the blustery Carter, and now he’s sitting back enjoying the show. Is it any wonder why Carter’s been running around Europe with his hair on fire? Here’s more from the same article:

“Think of the huge leverage this will give Russia…..Germany may not have much in the way of natural resources of its own, but with Russia’s help, it is becoming an energy hub of Europe! Increasing quantities of Russian gas are flowing through Germany before being distributed to countries like the Netherlands, Belgium, France and Britain. In this way Germany leverages the power of Russia. Western Europe also is becoming dependent on Germany for gas supplies too…

Don’t let the current conflict in Ukraine cloud what is happening. Germany and Russia have a history of secret cooperation—even when headline conflict appears to indicate otherwise. That Germany and Russia would push through such a deal when the West is supposedly sanctioning Russia for its actions in Ukraine speaks volumes.” (“Gazprom’s Dangerous New Nord Stream Gas Pipeline to Germany”, The Trumpet)
Talk about sour grapes! The author would like you believe that US motives in Europe are pure as the driven snow, but are they? Is Washington really afraid of Russian aggression or are they trying desperately to keep the unipolar model intact by separating Germany and Russia? Isn’t that what the sanctions are all about? STRATFOR CEO George Friedman summed up it up perfectly in a recent speech he gave at The Chicago Council on Foreign Affairs. He said:

“The primordial interest of the United States, over which for centuries we have fought wars–the First, the Second and Cold Wars–has been the relationship between Germany and Russia, because united there, they’re the only force that could threaten us. And to make sure that that doesn’t happen.”


Bingo. This is Washington’s strategy in a nutshell, preventing German industry from linking up with Russia’s vast natural resources. That’s the lethal combo that will lead to an integrated Eurasian free trade zone that will dwarf US GDP and put an end to the empire. So don’t believe the baloney about “Russian aggression”. What Washington really cares about is an economic rival that could leave it in the dust. And that’s exactly what’s going to happen when Germany becomes Moscow’s biggest gas station.

Naturally, the Gazprom news left Carter in a bit of a crabby mood, which may explain why he’s been dragging himself from one Capital to the next issuing terse warnings to Putin while promising NATO more weapons, more troops, more joint-maneuvers, and more missiles. And for what? To stop the Cossacks from sweeping across the Steppe and into Baltics? Be serious. Putin’s not going to invade Europe. He wants their business, that’s all. Like we’ve been saying from the beginning; Putin just wants to makes some dough. He wants to pull his economy out of recession, and, yes, beef up Gazprom’s profits. Is there a problem with that?

Nope. In fact, that’s the way the US used to do things, y’know, before they decided it was easier to just blow up stuff and steal whatever they could.

But all this whining about Putin is ridiculous, don’t you think? So he sells gas to Europe. So what? Get over it. No one likes a whiner.

Of course not. Any fool could have seen this coming, so why was the Pentagon caught flatfooted? Don’t they have anyone on the payroll who can figure out stuff like this or are they too busy with their damn wargames? And why is Carter talking about tanks and missiles systems when US trade reps should be looking for ways to cut a deal? Isn’t that the way capitalism is supposed to work or has the US degenerated to the point where it has to incinerate anyone it can’t compete with? It’s pathetic! Here’s a clip from Carter in Europe:

“One of [Putin's] stated views is a longing for the past and that’s where we have a different perspective on the world and even on Russia’s future, Carter said.


C’mon, Carter. Can’t you just man-up and admit the US can’t compete anymore so you’ve decided to start a war instead. Is that so hard to say?

Of course Carter has made every effort to sweep the Gazprom story under the rug and pretend that nothing has happened, but anyone who follows these things can figure it out. The fact is, he got his clock-cleaned by Putin, and not just once either. There was another bombshell on Wednesday that just added a little icing to the cake. Check this out from Oil Price.com:

“Russia’s state-run gas company Gazprom says it has taken a step toward building the Turkish Stream pipeline by securing permission from Ankara to begin surveying waters of the Black Sea for the offshore leg of the project… Alexander Novak, Russia’s energy minister, says he expects Ankara and Moscow will sign an agreement to build Turkish Stream by the end of June.” (Controversial Gazprom Pipeline Clears Hurdle, Oil Price)


That’s what you call the double whammy! Now Putin’s going to be pumping gas into Europe from both directions leaving Uncle Sam out in the cold. Can you feel those Russian pincers starting to tighten around Europe? Now you can understand why Carter’s been running around Europe with his knickers in a twist; it’s because his glorious divide and conquer strategy just exploded in his face. His only option now is to scrap Plan A altogether and go back to drawing board. What a freaking disaster.

There’s another story that broke during Carter’s euro-junket that’s also worth mentioning. This is from Bloomberg:

“Ukraine will miss a bond coupon payment in July, setting off a default on about $19 billion of debt, as a standoff with creditors shows no sign of abating, according to Goldman Sachs Group Inc…

Ukraine is giving creditors a few weeks to accept a proposal that includes a 40 percent writedown to principal before it imposes a debt moratorium, a person familiar with the talks said on June 19.
“Ukraine will not make the July 24 coupon payment and, as a result, will enter into default at that point,” Matheny said of his base-case scenario in the report. “We do not expect the ad hoc committee to accept Ukraine’s latest restructuring proposal.” (Goldman Sees Ukraine Default in July as Debt Standoff Holds, Bloomberg)
Ukraine is busted, are you kidding me? The country that was so critical to US plans for luring Putin into a Vietnam-type quagmire, is headed for bankruptcy? So all that work was for nothing–toppling the government, arming the Nazis, fomenting a civil war, incinerating buildings full of civilians in Odessa, shooting down commercial airliners, and plunging the state into Somalia-like chaotic abyss? It was all just a big miscalculation, a boo-boo; is that it?

Can you see why the United States can’t be trusted as “the guarantor of global security”? Washington destroys everything it touches with its wrecking ball foreign policy; Afghanistan, Iraq, Libya, Syria. Now it’s destroyed Ukraine. Who’ll be next?

Putin has done us all a favor by throwing a wrench in Washington’s plans and helping to bring the era of imperial overreach to a swift and merciful end. We all owe him a debt of gratitude.

Mike Whitney lives in Washington state. He is a contributor to Hopeless: Barack Obama and the Politics of Illusion (AK Press). Hopeless is also available in a Kindle edition. He can be reached at This email address is being protected from spambots. You need JavaScript enabled to view it..