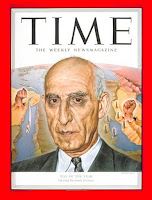 The Coup: 1953, the CIA, and the Roots of Modern U.S.-Iranian Relations deals with such an engaging topic that even this new book can't really make it boring, hard as it seems to try.

When asked what historical figure I would most like to bring back to life and have a talk with I tend to think of Mossadeq, the complex, Gandhian, elected leader, denounced as both Hitler and a communist (as would become part of the standard procedure) and overthrown in an early CIA coup (1953) -- a coup that encouraged dozens more around the globe and led straight to the Iranian revolution and to today's Iranian distrust of the United States.

I'm more inclined to believe that current Iranian distrust of the U.S. government is well-merited than blaming it on a long-ago coup implies, but the coup lies at the root of Iranian and worldwide skepticism about generous U.S. intentions.

It's also an interesting fact, supported by this case, that some of the best government actions, taken by any government around the world, have occurred just prior to various U.S.-backed violent coups -- and I include in that category the U.S. New Deal, followed by the unsuccessful Wall Street coup attempt rejected by Smedley Butler.


Mossadegh had just done, among other things, these: Slashed the military budget 15%, launched an investigation into weapons deals, retired 135 senior officers, caused the military and police to report to the government rather than to the monarch, slashed stipends to the royal family, restricted the Shah's access to foreign diplomats, transferred the royal estates to the state, and drafted bills to give women the vote and protect the press and the independence of the Supreme Court and taxing extreme wealth by 2% and giving workers healthcare and upping peasants' share of the harvest by 15%.

Facing an oil embargo, he cut state salaries, eliminated chauffeured cars for high officials, and restricted luxury imports. All of that was in addition, of course, to the cause of the coup: his insistence on nationalizing the oil from which a British company, and Britain, had been profiting enormously. 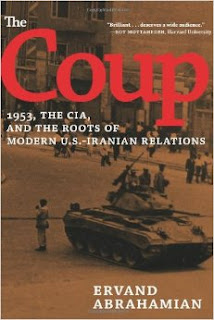 The bulk of the book is actually the lead-up to the coup, and much of the emphasis is on proving other historians wrong in their interpretations. Supposedly, historians tend to blame Mossadeq for intransigence, as well as to blame the U.S. action on its Cold War ideology. The author, Ervand Abrahamian, on the contrary, blames the British and Americans, and explains why this was centrally a question of who would control the oil lying underneath Iran. My reaction to that was the same as yours might be: No kidding!

So, reading this book is a bit like reading criticism of the corporate news after you've avoided the corporate news. It's good to see such outrageous lunacy debunked, but on the other hand you were getting along just fine not knowing it existed. Reading Richard Rorty, who gets an odd mention on the last page of the book, is somewhat similar -- it's great to see a fine critique of the stupid things philosophers think, but not knowing they thought them wasn't really so unpleasant either.

Still, in all of these case, what you don't know can hurt you. What a group of bad historians thinks about the history of U.S.-Iranian relations can inform current diplomacy (or lack thereof) in ways that are easier to spot if you know exactly what these people have deluded themselves with.

Abrahamian does document numerous historians who believe the British were reasonable and ready to compromise, whereas -- as the author shows -- that actually describes Mossadeq, while the British were unwilling to do any such thing. His inclusion of Stephen Kinzer in the list of historians getting it wrong is probably the most stretched, however. I don't think Kinzer actually believes that Mossadeq was to blame. In fact, I think Kinzer not only blames the United States and Britain, but he also openly admits that what they did was a really bad thing (in contrast to Abrahamian's emotion-free recounting).

Abrahamian gives extreme importance to the economic motivation, as opposed to racism for example. But of course the two work together, and Abrahamian documents both of them. If Iranians looked like white Americans, the acceptability of stealing their oil would be less clear in all minds, then and now.

The 1953 coup became a model. The arming and training of the local military, the bribing of local officials, the use and abuse of the United Nations, the propaganda against the target, the stirring up of confusion and chaos, the kidnapping and deportation, the misinformation campaigns. Abrahamian points out that even U.S. diplomats in Iran at the time didn't know the U.S. role in the coup. The same is almost certainly true today about Honduras or Ukraine.

Most Americans have no idea why Cuba fears an open internet. Just foreign backwardness and stupidity, we're supposed to think. No there's an ideology that both fueled the ongoing age of the CIA / USAID / NED coup and has been reinforced by its criminal adventures.