Former Guantánamo Prisoner Omar Khadr Says He Is “Ready” for Freedom; All Decent People Must Agree
by Andy Worthington

UPDATE: I’m delighted to report that Justice Myra Bielby has granted Omar’s bail. “Mr. Khadr, you are free to go,” she said at the hearing today in the appeals court in Edmonton. The Toronto Star reported that Omar “broke into a big, wide smile when the decision was read. His supporters in the courtroom erupted in cheers.” 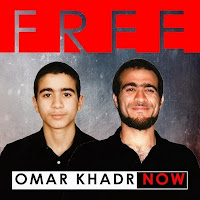 As the Guardian described it, however, “Khadr’s legal ordeal is far from over. The government has given notice that it intends to challenge the bail order itself.”

Nevertheless, I believe the government needs to accept that its vindictive demonization of Omar has run its course. On June 25, Omar will go before a parole board, providing another opportunity for him to be granted his freedom.

Omar’s long-established attorney Dennis Edney, with whom he will be living, told reporters, “I intend to drive him straight home,” and added, as the Guardian put it, that “he had squeezed [his] finger and said: ‘We did it.'” His other longtime attorney, Nathan Whitling, said, “Whatever anyone may think of Mr. Khadr, he’s now served his time.”

The updated logo for the Free
Omar Khadr Now campaign

Edney added that “he expects to hold a press conference on Friday so Khadr can address the public for the first time,” as the Guardian described it. “I look forward to Omar Khadr letting the Canadian public see who he really is, to challenge the lies of this government, who have not allowed him to be seen or to speak to you media,” Edney said. He also said, “Mr. Harper is a bigot. Mr. Harper doesn’t like Muslims. He wants to prove he’s tough on crime so who does he pick on? A 15-year-old boy.”


Nearly 13 years after he was first seized after a firefight in Afghanistan at the age of 15, Omar Khadr, who is now 28, is hoping that today he will be released on bail. Two weeks ago, a judge in Alberta, Justice June Ross, granted his application for bail, which his lawyers had argued for at a hearing on March, but the government then announced its intention to appeal, even though there were no grounds for doing so.

The Canadian government has persistently treated Omar with contempt, ignoring the fact that, as a juvenile, he was not responsible for his father taking him to Afghanistan and putting him in harm’s way, ignoring their obligations and those of the US to rehabilitate child prisoners seized in wartime, and not to punish them, and refusing to accept that the plea deal he agreed to in Guantánamo was not a trustworthy admission of guilt, but an understandable route out of Guantánamo, where, otherwise, he might have been held forever.

The government also dragged its heels securing Omar’s release from Guantánamo, and then tried to defend holding him in a maximum-security prison, which prevented him from applying for bail. That disgraceful situation only came to an end last year, in part because of repeated complaints by senior prison officials.

As Justice Ross noted, Omar “has a 12½ year track record as a model prisoner, and a release plan supported by educators, mental health professionals, and his lawyers.” She also noted that his appeal against his conviction at Guantánamo, in the monstrously flawed military commission system, was “likely to succeed and keeping him in jail was not in the public interest,” as the BBC described it.

On Tuesday afternoon, Justice Ross set the conditions of Omar’s bail — he will live with his longtime lawyer, Dennis Edney, and his wife, he will have to wear an electronic tag, and he will have limited access to his family and to the internet.

However, on Tuesday morning, Justice Myra Bielby, of the appeals court in Edmonton, heard the government argue against Omar’s proposed bail, and will only decide whether to accept that appeal today, May 7.

Anyone with any decency will have to hope it is the former, because the government has no case. Not only do ministers concede that Omar has been a model prisoner throughout nearly 13 years of imprisonment, but there is no evidence to back up their claim that releasing him on bail while he is challenging his conviction in the US would somehow damage Canada’s diplomatic relations with other countries.

As the Toronto Star put it, Department of Justice lawyer Bruce Hughson “argued that releasing Khadr would cause ‘irreparable harm’ to Ottawa’s diplomatic relations with other countries looking to transfer Canadians home to serve the remainder of their sentences.” However, under cross-examination by one of Omar’s lawyers, Nathan Whitling, Lee Redpath, a senior Corrections Canada official involved with prisoner transfers, “admitted that there was no evidence that Khadr’s release would strain relations, only that the possibility existed.”

On Tuesday, the Toronto Star also reported on a psychological report about Omar, prepared by Nathan Lau, the prison psychologist at the prison in which he is currently being held, the Bowden Institution in Alberta, following an interview on February 20, which, as the Toronto Star described it, “presents the most sympathetic portrait of Khadr to date.”

“I’m ready,” Omar told Nathan Lau, speaking about his potential release, adding, “I hope that people get a chance to know the new me.”

Omar also said, “In prison, I had lots of bad experiences. If I hold on to each one, I would have been very bitter. I can’t afford to be bitter. I did something bad and I’m here for a reason. The only way to survive is to have hope. If I hope for people to give me a second chance, I should afford them the same.”

Crucially, as the Toronto Star explained, “Lau’s assessment led to Khadr’s reclassification from a medium security inmate to one that requires minimum security,” as well as providing “some of the most candid and detailed descriptions of Khadr’s past and outlook for the future.”

“If I could do things differently, I probably would have challenged my father more,” Omar told Lau, adding, “I don’t think I could have said ‘no’ to him but would have tried.”

It was Omar’s father, Ahmed Said Khadr (killed by Pakistani forces in 2003), who had taken him to Afghanistan, and who was responsible for his actions. As the article described him, he was “a charity worker with ties to Al-Qaeda’s elite,” who “shuttled Khadr and his siblings between their home in Scarborough to residences in Afghanistan and Pakistan throughout the 1990s.”

Speaking of the circumstances that led to his capture, Omar told Lau, “Then 9-11 happens. My dad wasn’t around and everyone freaked out.” He then, as the newspaper put it, “described the lead-up to July 27, 2002, when he was shot and captured after, it is alleged, he’d thrown a grenade that fatally wounded US Delta Force Sgt. Christopher Speer.”

“I’ll tell you what I thought happened,” Omar said. “I heard Americans. I heard shooting. I was scared. I had a hand grenade. I threw it over my back and it exploded. I wanted to scare them away, I wasn’t thinking of the consequences. After that I was shot.”

Omar also stated that, since his capture, he has “seen evidence that he was buried under rubble and could not have thrown the grenade,” but he explained, “I still take responsibility but hold on to hope it wasn’t me … I just hope I wasn’t the person responsible for killing someone.”

He also told Lau that he was “happy with this transfer to Canada in 2012 but had difficulty adapting to the ‘con code’ of federal penitentiaries,” as the Toronto Star put it. In his own words, he said, “It’s hard to build a relationship with the guards here. We can’t seem to be too friendly with each other. It gets me in some trouble when I refuse to abide by the con code.”

He also explained how he had to give up his job as a food server while he was held in the maximum-security Millhaven Institution in Ontario. “This guy, he thinks we are buddies and that I will give him a whole bag of butter,” Omar said. “I wouldn’t give it to him and he gets p—ed off. I talked to my Correctional Officer and just quit the job. There was too much drama.”

He also explained how later, in Edmonton, he was “punched in the face by another inmate who said his family was in the military.”

He also pointed out that he is looking forward to life outside prison, although he conceded, “I don’t think it will be a piece of cake. I’ve screwed up in the past and I’m worried it will haunt me. People will think I’m the same person I was 12 or 13 years ago. They might treat me in the same light.”

He added, “However, if I carry myself with dignity and respect, people will respect me. I hope there won’t be this terrorism nonsense. I’m not going to get involved.”

I hope these words will be the last we hear from Omar in captivity, and that later today he will be free. As I noted in a statement I was asked to submit by the Free Omar Khadr Now campaign, “It is time for the Canadian government to abandon its shameful and unacceptable vilification of Omar, and to accept Justice Ross’s ruling.” I added that Omar should finally be “allowed to begin to rebuild his life free of a prison’s walls.”

Andy Worthington is a freelance investigative journalist, activist, author, photographer, film-maker and singer-songwriter (the lead singer and main songwriter for the London-based band The Four Fathers). He is the co-founder of the “Close Guantánamo” campaign, the co-director of “We Stand With Shaker,” calling for the immediate release from Guantánamo of Shaker Aamer, the last British resident in the prison, and the author of The Guantánamo Files: The Stories of the 774 Detainees in America’s Illegal Prison (published by Pluto Press, distributed by the University of Chicago Press in the US, and available from Amazon, including a Kindle edition — click on the following for the US and the UK) and of two other books: Stonehenge: Celebration and Subversion and The Battle of the Beanfield. He is also the co-director (with Polly Nash) of the documentary film, “Outside the Law: Stories from Guantánamo” (available on DVD here — or here for the US).