Omar was seized after a firefight in Afghanistan when he was just 15 years old, but was never treated as a juvenile prisoner should have been treated, which is to be rehabilitated rather than punished. Abused in US custody, and having had his hopes of justice dashed by the Canadian agents who visited him at Guantánamo, he finally agreed to a plea deal in October 2010, in a trial by military commission that should never have happened, as the only method by which he could guarantee his release. 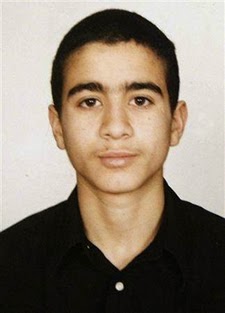 In exchange for accepting that he threw a grenade that killed a US soldier, which appears to have been untrue, he received an eight-year sentence, with one year to be served in Guantánamo, and the rest to be served back home in Canada.

However, it took nearly two years for the Canadian government to get him back, and when they did they imprisoned him in a maximum-security prison, and resisted all attempts to downgrade his status so that he could apply for bail. That disgraceful situation only came to an end in February 2014, when he was moved to a medium-security facility, which made him eligible for bail.

At his bail hearing last month, his model behaviour throughout his long imprisonment, and the norms of Canadian law were set against the government’s claims that Canada’s agreement with the US regarding Omar took precedence.

As the Toronto Star described it:

“Neither side is suggesting Mr. Khadr is a threat to anyone and I would suggest that’s a very, very important factor,” Khadr’s lawyer Nathan Whitling told Alberta Justice June Ross …

But what Department of Justice lawyers are arguing in contesting Khadr’s bail application is that Ross doesn’t have the jurisdiction to grant Khadr bail without violating an international treaty and jeopardizing relations with the United States.
“It’s critically important that Canada meet its international obligations,” lawyer Bruce Hughson told the court.
Canada’s duty under the International Transfers of Offenders Act is to enforce Khadr’s US sentence in Canada. There is no provision for bail. But … Whitling argued that Ottawa’s obligation under the act is to enforce the sentence in accordance with Canada’s laws. And Canada’s law respects the right to bail during an appeal, and the fundamental principle of habeas corpus, which gives prisoners the right to challenge the legality of their detention.
Khadr should be treated “no differently than any other prisoner in Canada,” Whitling said. If Ottawa is denying Khadr’s habeas rights then, Whitling argued, “it’s very much like we’re back in Guantánamo.”
On Friday, Justice Ross agreed with Omar’s lawyers, concluding that the “right to seek bail pending appeal is a principle of fundamental justice,” and that Omar’s right to seek bail was guaranteed under Canada’s Charter of Rights and Freedoms. She refused to accept the government’s argument that, as the Toronto Star put it, “granting Khadr bail would jeopardize Canada’s diplomatic relationship with the United States.”

As the Toronto Star also explained, looking at what the judge’s ruling means, Omar’s other longtime Canadian lawyer, Dennis Edney, along with his wife Patricia, “has offered to have Khadr live with them and provide whatever community supervision he may require.”

In addition, “A large community group in Edmonton — from imams and medical professionals, to professors at a Christian university where Khadr has been offered admission — has rallied around the 28-year-old.”

Dennis Edney and Nathan Whitling argued the bail application, and both men “said they were delighted by the news,” as the Star described it. Whitling said,

“Omar is fortunate to be back in Canada where we have real courts and real laws,” and Edney added, “It has been a long time coming.”


Nevertheless, the Canadian government has said it intends to appeal the ruling, and, as the Star explained, the government “could argue that Khadr must remain in custody until that appeal is heard.” If that doesn’t happen, then a hearing scheduled for May 5 will set the conditions of Omar’s bail.

The Canadian government should drop its intention to appeal, and should accept that its demonization of Omar must now come to an end, but if that doesn’t happen it is to be hoped that the appeals court will recognize that it time for Omar to be freed to resume his life, and not to continue being used as a pawn in a racist game by the Canadian government.

Omar has spent almost half his life in prison for something he almost certainly didn’t do, and for which he should not, in any case, have been punished. It is time for this festering injustice to be brought to an end.

Andy Worthington is a freelance investigative journalist, activist, author, photographer, film-maker and singer-songwriter. He is the co-founder of the “Close Guantánamo” campaign, the co-director of “We Stand With Shaker,” calling for the immediate release from Guantánamo of Shaker Aamer, the last British resident in the prison, and the author of The Guantánamo Files: The Stories of the 774 Detainees in America’s Illegal Prison (published by Pluto Press, distributed by the University of Chicago Press in the US, and available from Amazon, including a Kindle edition — click on the following for the US and the UK) and of two other books: Stonehenge: Celebration and Subversion and The Battle of the Beanfield.

He is also the co-director (with Polly Nash) of the documentary film, “Outside the Law: Stories from Guantánamo” (available on DVD here — or here for the US).