An open letter to Peter Mansbridge and the CBC News
by Jim Miles, The View from Canada - Axis of Logic 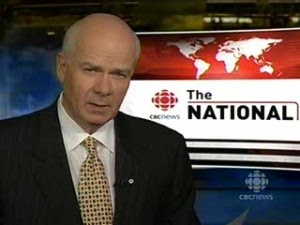 It is a very short commercial but it speaks volumes about Canada’s supposedly leading news channel. In its fifteen seconds, Peter Mansbridge’s voice over says,

“I don’t make the news, I report it and at the end of the day if we’ve affected one person, one policy, that’s not a win, that is the news.”

Coming from the national CBC network, this is a rather pathetic self-serving mini infoclip. I had seen a longer clip that included a nice cliche about “the facts” but unfortunately tonight I cannot find a copy of that clip on line.

Regardless, the response is simple: yes, you do make the news. You make it by editing information, not using information, using descriptive language that either makes for a pejorative or ameliorative perspective.
In the end, at the end of the day, yes it is a win for whichever perspective you are trying to promote within your editorial meetings and/or as directed by your corporate bosses. Facts are important, but it is the context they are placed within, the descriptors used, and in some cases it is a simple matter of not using a fact in order to build a bias.

Let me provide some recent examples.

First, a nice straight forward simple one from Wendy Mesley’s interview with Naomi Klein concerning her new book This Changes Everything - Capitalism versus the Climate (Alfred A Knopf, Canada, 2014. Well worth the read.) During the interview, Ms Mesley said (paraphrased) “We are not allowed to use ‘tar sands’, we have to use oil sands.” So how does that fit in with the ‘facts’, one of which is that in Alberta it is bitumen, the prime component of tar, from which - tar sands?

Crude bitumen as found in the tar sands is so heavy and viscous that it will not flow unless heated or diluted with lighter hydrocarbons. Among many other reasons that is a principal reason why it should not be shipped across British Columbia and over B.C.’s coastal oceans.

Another example of CBC news spin was January 23's report by Susan Ormiston comparing Alberta and Norway and their respective accumulated oil heritage funds. From her reporting, the implication is that Norway is in such a positive position because of its oil fund.

What is not mentioned is that when the fund was made, the government continued to tax the citizens at their original rates. What this prevented was the Norwegian kroner from becoming a “petro-kroner”. In other words, the state did not become reliant on oil for its budgetary finances. Certainly they utilize it, but for the most part, the oil profits are invested in a heritage fund that will protect Norway from having to worry about IMF/World Bank imposed “austerity” if the economy drops - as it will with the current oil price down turn.

Further to that comparison, Norway’s taxes compared to Alberta’s are about twice as high: corporate 27 to 15 per cent; Personal 39 to 29 per cent; Sales tax 25 to 5 per cent (GST); and Social Security, 20 to 12.5 per cent. On the other hand, education and health care in Norway are free at all levels to all citizens, and in some cases to non-citizens as well, with Norway scoring consistently higher than Canada on international standardized testing.

So where are Alberta and Canada? The majority of the money from the tar sands goes to the corporations. Our petro-dollar, as it has become, is subject to the whims of the oil market (and the US$, but that is outside this presentation). Education in Canada is increasingly becoming more and more expensive, and health care is being privatized more and more, making both less and less accessible to the general population.

I would much rather have Norway’s continuing social democracy to Canada’s increasingly less democratic plutocracy.

I have mentioned previously how Canada’s news - in particular reference to the CBC - is biased as well as wrong when it comes to the situation in the Ukraine.

First is the larger context of US hegemony and its military efforts to protect its own petro-dollar, as seen with the wars in Afghanistan, Iraq, Libya, and Syria among many others, and the ongoing relationship with autocratic tribal monarchies (45 beheadings in Saudi Arabia so far this year … great ally) in the Gulf region as well as around the world.

The CBC also does not give the background to the Maidan protests, and how they were manipulated by the US with covert operations guided by assistant secretary of state Victoria “F**k the EU” Nuland (this reference can be verified on You Tube).

Nor are they using “facts” when they say that Russia is the aggressor in the Eastern regions, when it was the Kiev neoNazis that attacked in order to get rid of the Russian population in the east. Is Russia involved? Certainly, but only after the US started and continues to aggravate the situation in the Ukraine.

One of the bigger Mansbridge lies within this story were the repeated statements about the “rest of the world” and the “international response” while actually simply referencing the reaction of the U.S. and its allied government puppets. In ‘fact’, the majority of the ‘rest of the world’ which includes China, India, the Philippines, most of Africa, most of Latin America, did not buy into the manufactured story about Russian aggression getting ready to attack Ukraine and/or Europe.

That is simply fear factor fodder for the domestic masses within the ‘western’ world, who, if polls are correct, don’t want a war with Russia in any case.

As it stands now, China has Russia’s back; they are trading in renminbi and not dollars, the new Asian Infrastructure Investment Bank has applications from most of the G7 to be an originating member, with even the U.S. expressing interest as its allies ignore its pleas not to join (but not Canada….?). The Chinese International Payment Platform (CIPS) program avoids the US$ and the IMF/World Bank/SWIFT and other institutions of the Washington consensus.

Is any of that in the news? Yes, if you look on the internet, but not so much if you look towards the CBC.

(2) Oligarchs at war in Ukraine?

The View from Canada is the domain of writer Jim Miles, a Canadian educator living in British Columbia. He writes regularly about the Middle East and its militarization and economic subjugation. His concerns include the commodification of the world by corporate governance and the American government. He writes book reviews and opinion pieces which are published here, as well as in The Palestine Chronicle and Foreign Policy Journal. His work is widely distributed across the Internet.


Jim also regularly writes to all members of Canada's Parliament. We reproduce those here as The Miles Report