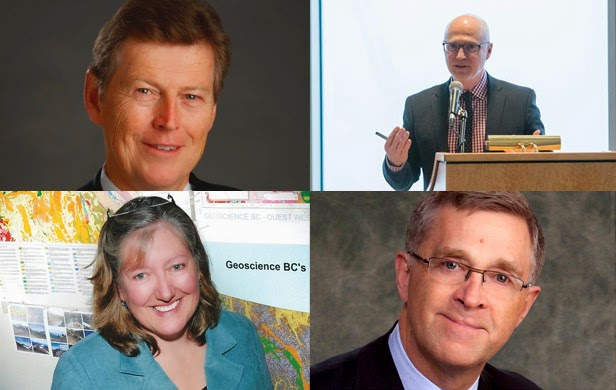 It’s an axiom of debate that if you don’t like the argument you’re in, find one that you’re more comfortable with.
Barristers use this technique before juries all the time and that’s precisely the technique that Resource Works, a well-heeled pro-LNG group, is using to bamboozle the public of British Columbia.
The glossy 58-page document they use is called A Citizen’s Guide To LNG: Sea To Sky Country Edition. Knowing many of the supporters personally, and most of them by reputation, I don’t believe any of them actually wrote this rubbish – it has all the earmarks of a large PR firm.
Team LNG This is what they say about themselves:

Resource Works recognizes the demand of British Columbians for economic growth and environmental sustainability, and aims to break the ice in the controversial resource debate. In 2014, Resource Works organized community conversations in 8 municipalities in the Lower Mainland, involving more than 120 participants consist of local government, businesses, NGOs and citizens. Moderate, rational discussions are a necessary first-step towards BC’s sustainable future. (Emphasis mine)


Here are some of the players:

As to who is funding the research, Resource Works did volunteer the information that seed funding came from the B.C. Business Council, but has not disclosed other sources of funding.

An Encana drill rig in northeast BC’s Horn River shale gas play
It’s interesting that A Citizen’s Guide To LNG: Sea To Sky Country Edition doesn’t touch the issue of “fracking” until page 46 and then only in two brief paragraphs. It mentions that there is a US documentary on the subject but says that they, Resource Works, don’t think there’s any evidence of problems with “fracking” in BC. If that doesn’t convince you, I ask you, what will?

It’s “fracking”, however, that causes the atmospheric damage, damage to our water, and the health risks to the population. Moreover, as Andrew Nikiforuk has reported to us, the weakening of the ground around the fracking area has caused serious earthquake problems in Holland. Increased seismic activity has been connected to fracking in BC and throughout the US as well. Resource Works does admit that there could be earthquake problems but that they have always been very minor. Doesn’t that make you feel better?
Because Woodfibre says so

Let’s look at the specific claims made on behalf of Woodfibre LNG. What’s fascinating about these few pages is that the information is constantly based upon what Woodfibre LNG has told them! Their word is accepted on every major issue uncritically. Woodfibre LNG is wonderful because Woodfibre LNG tells us so! There is a paucity of scientific evidence or indeed anything from people who might have another point of view.

There’s no mention that Sukanto Tanoto, the owner of Woodfibre’s holding company, a convicted big-time tax evader with a very poor environmental record.

Let’s look at transportation of LNG by tanker through Howe Sound. I do that not just because it’s of enormous concern to everybody who lives along the proposed route, but Resource Works dwells upon the issue. They concede that if tankers go too close to the shore, there could be a problem. However, they assure us there is no problem because they spoke to Dr. Mike Hightower, of Sandia Laboratories in New Mexico, a world acknowledged expert on the subject, who’s developed a protocol accepted by US authorities for the distances ships must maintain between themselves and the shore.

Resource Works has produced a number of videos which they make available to the public in order to sell the benefits of LNG. In all of them the interviewer is an attractive young lady named Meena Mann. It is in one of them, featured on the Vancouver Province website, where Dr. Hightower talks to Ms. Mann about LNG and tankers and you would likely conclude that there was very little danger, if any, posed by LNG tankers in Howe Sound.

Here is what Sandia has reported, based upon Dr Hightower’s work:

Sandia National Laboratories defines for the US Department of Energy three Hazard Zones (also called “Zones of Concern”) surrounding LNG carriers. The largest Zone is 2.2 miles/3,500 meters around the vessel, indicating that LNG ports and tankers must be located at least that distance from civilians. Some world-recognized LNG hazard experts, such as Dr. Jerry Havens (University of Arkansas; former Coast Guard LNG vapor hazard researcher), indicate that three miles or more is a more realistic Hazard Zone distance.


What the video does not tell you is that Dr. Hightower had not addressed his attention Howe Sound, and when local resident Dr. Eoin Finn did so, Dr. Hightower concurred that Bowen Island and parts of West Vancouver are very much at risk – within the 1-mile radius – as are parts of the Sea-to-Sky Highway and Lions Bay/Bowyer Island. In other words, If one accepts Dr. Hightower’s formula, as Resource Works clearly does, there is no way any LNG tankers would be permitted to proceed from Squamish to the ocean.

Dr. Eoin Finn, a former KPMG partner and chemistry PhD, took the time to phone Dr. Hightower because the interview didn’t look quite right. Well, it wasn’t right because it wasn’t conducted by Meena Mann at all but by a male! 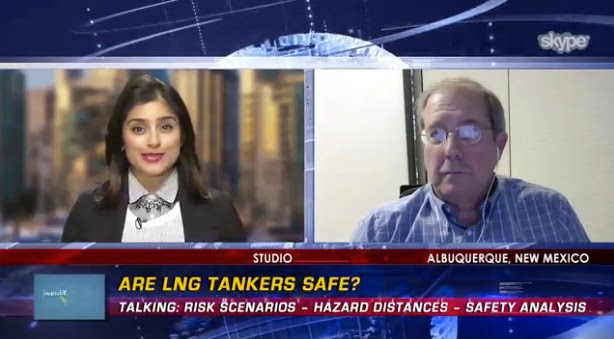 Alleged interview by Meena Mann (left) with Dr. Mike
Hightower (right), which appears to have been doctored
Dr. Hightower was not prepared to say that he had been misrepresented other than the fact that it was a man who interviewed him but he was dubious about Resource Works’ characterization of his “burn back to the source” description. The vapour cloud is much more complex than a simple burn-back, and people exposed to the flame would stand a high likelihood of being severely burned by the high temperatures of the flame. Indoors, not so much, but he expected that the flame would suck up much of the oxygen in the air, so asphyxiation would be a serious problem in the area of the vapour cloud.

Was the question changed when Ms. Mann did her fake interview? Was Dr. Hightower’s answer altered? I don’t know but this sort of shabby deception is bound to raise doubts like this. What we do know is that far from supporting Resource Works’ assertion that LNG tanker traffic is safe in Howe Sound, given the facts, Dr. Hightower comes to exactly the opposite conclusion.

Resource Works is guilty of a hugely deceptive practice. Even if Miss Mann asked precisely the same questions the real interviewer did, there are different inflections in the voice no doubt and her body language during the interview was, to say the least, descriptive of her feelings. If this is an example of the integrity of Resource Works, they are not entitled to any credibility whatsoever.

Watering down the truth


In fact it is much worse than this. Resource Works has simply not told the truth and they ought to publicly apologize. Here’s the evidence:

A case was brought in 2013 against Encana and the province by the Wilderness Committee and Sierra Club. The issue was whether or not section 8 of the Water Act, which allows back-to-back short-term permits, was valid. That was the sole issue; the judge made it clear that she wasn’t deciding the government’s overall water policy, or the ” fracking” question, but whether back-to-back short term water leases under The Water Act were valid – bear that in mind.

Resource Works, in reporting this – and I quote, from page 47 of A Citizen’s Guide To LNG: Sea To Sky Country Edition - states:

When a ruling came down in late 2014 it showed that the regulatory processes in place, and industry compliance with them, are sound and well managed.


In an overwhelming endorsement of current practices in water protection, justice Fitzpatrick concluded that when it comes to the regulation of industries water usage, British Columbia is in good shape with a “justifiable transparent and intelligible framework for the regulation of short term water use.


In fact, she did no such thing as a reading of the judgment makes abundantly clear. She confined her decision to the interpretation of Section 8 only. The issue was whether or not section 8 of the Water Act, which allows gas companies to get an endless number of water approvals back-to-back, was lawful.

Only a practitioner of the black arts of Public Relations could read into Madam Justice Fitzpatrick’s judgment that she said “that the regulatory processes in place, and industry compliance with them, are sound and well managed”, or “when it comes to the regulation of industries water usage, British Columbia is in good shape.'”

She simply did not say this!

The fact that the petitioners, the Wilderness Committee and the Sierra Club, had made an appropriate application was reflected in the fact that no costs were awarded against them, even though they had lost the case.

Surely, one’s entitled to conclude that this sort of disassembling, distortion, and outright misrepresentation colours all of the presentations of this outfit.

Resource Works’ Advisory Board
Resource Works would have us believe that they are an independent group, concerned only with the public weal, and really quite independent on the issue of LNG, only wanting to enhance reasonable debate.

Quite obviously this is utter nonsense. They are obviously flacks for the LNG industry and pretty obviously for the Christy Clark government as well.

Are they paid flacks? I don’t know, which is why it would be most interesting if they disclosed how they are funded – how much and by whom? This operation – the dozens of slick videos, the reports, the website – could not be done cheaply. Where did the money come from? Are there public funds involved?

The question for those involved, who include a former premier and two former attorneys-general of the province, is this: your integrity is at stake here – do you really want your reputations used to back up these statements?


Postscript: A Citizen’s Guide To LNG: Sea To Sky Country Edition, a booklet of 58 pages, was written, so it states, by the Executive Director, Stewart Muir and Barinder Rasode who is – get this for delicious irony – “Director of Social Responsibility for Resource Works” – don’t you love it?